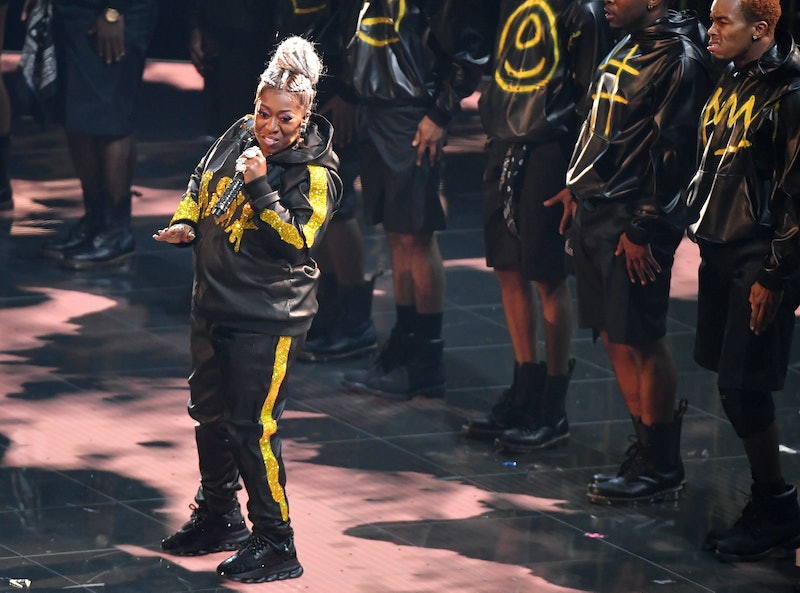 During Monday night's MTV Video Music Awards, Missy Elliott took to the stage for an iconic rendition of her greatest hits. Every song Missy Elliott sang at the VMAs had people on their feet and feeling hype, but Missy being Missy, she went the extra mile. Most of the performance also recreated her industry-changing music videos for the tracks.

Without further ado, theses are the songs Missy performed, in order: "Throw it Back," "The Rain (Supa Dupa Fly)," "Hot Boyz," "Get Ur Freak On," "Work It," "Pass That Dutch," and "Lose Control."

Everyone was ready for the icon to receive the Vanguard. On the red carpet, Lizzo expressed her excitement that it was finally Missy's time to get this coveted honor. The fact that she wasn't yet a Vanguard winner is apparently one of the first things she told her when they first met. "You are music videos," she recalled telling the artist. "This may be the most overdue award ever" said Justin Timberlake in a promotional clip. "She changed the way so many people made music, myself included." Did you know that Elliott produced "Lady Marmalade" featuring Christina Aguilera, Mya, Pink, and Lil Kim? That was her first "Video of the Year" win, back in 2001.

And, yes, that was former Disney Channel star Allyson Stoner dancing during "Work It." You probably remember how she shot to childhood fame as a tiny dancer in three of Missy Elliott's videos, including "Work It;" and Stoner came out to show her support at the VMAs. Most of the Vanguard performances paid homage to Missy Elliott's iconic music videos that shaped history and landed her this honor at long last.

If you're gonna throw it back, you might as well start it off right.

There was only a tiny bit of this '99 song in the performance, but we noticed.

"Get Ur Freak On"

That intro is recognizable from miles away, and one of Missy Elliott's most memorable tracks was the perfect middle to this performance.

You better believe Missy Elliott dressed up as a scarecrow at 48 years old. She had to!

Finally, one of her most creative videos ever — which took home "Best Hip Hop" and "Best Dance Video" at the 2005 VMAs.

As if that wasn't enough, the artist released a new album last week, y'all. After a 14 year hiatus, Elliott is back with the aptly titled Iconology. "Let’s #ThrowItBack to a time when music just felt good and made us want to dance," she tweeted, announcing the album's surprise midnight release. While the MTV Video Vanguard performance was a good way to, for lack of a better words, throw it back to all the Missy Elliott songs we grew up with, she's not done!

More like this
'Traumazine' Has Megan Thee Stallion Twitter Dancing Through Their Feelings
By Grace Wehniainen
Lauv Is No Stranger To Taylor Swift, Drake, Ed Sheeran, & Fame
By Alyssa Lapid
An Ultimate Guide To The Music Of 'Rap Sh!t'
By Brad Witter
Twitter Is At Odds Over Taylor Swift’s Possible ‘All Too Well’ Oscar Run
By Brad Witter
Get Even More From Bustle — Sign Up For The Newsletter