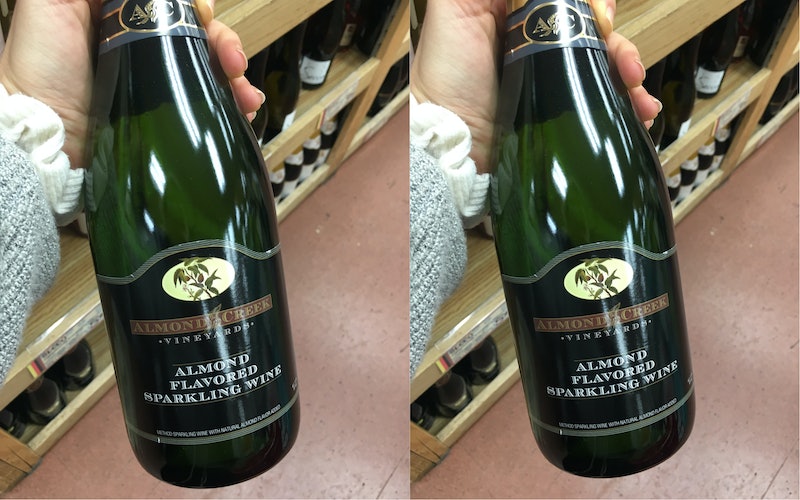 There's truly no shortage of weird wines you can treat yourself to in 2018. Where we used to have red, white, and rosé, we now have blue and green, pumpkin and blood orange, and every unexpected wine combo you can imagine. But as someone who has consumed more than their fair share of internet wines du jour, I think I will encounter very few in my lifetime that will inspire the same instant and lifelong devotion that this almond sparkling wine at Trader Joe's has — if you don't believe me, just ask my firstborn, whose middle name I have pre-legally changed to "almond sparkling wine" despite my current state of childlessness.

The wine, which I have now purchased an alarming number of times this summer from the Trader Joe's Wine Store in New York, has less-than-linear origins; the bottle says it hails from "Almond Creek Vineyards," which does not appear to be an actual place. Some reviews on the internet, which hark back at least a year, indicate that it's a "knockoff" of an almond sparkling wine from Wilson Creek Winery. That wine retails for $16.99 online, whereas the Trader Joe's version you will be prying from my cold, dead, millennial fingers is a mere $5.99 in stores.

As for the taste, it's very much like champagne in its bubbliness (can you tell how wine knowledgeable I am?), but the almond taste is prominent, and boy howdy, is it sweet. It kind of tastes like biting into an almond-flavored cupcake that explodes a little bit in your mouth. If you're not into sweet wines or don't have much of a tolerance for sweetness in general, sit this one out (a few reviews online knock it for its sweetness, in fact). But if you, like me, are basically a sentient pack of sugar, then you are about to meet your alcoholic match.

Its origins may be somewhat mysterious, but Trader Joe's describes it: "Almond Creek has tiny bubbles which add to the balance of sweet & tart — note of rich almonds, caramel apple, yeast." Again, I need to preface this by saying I am no wine expert (aside from my wine tooth), but in my personal opinion, it's the kind of sweet dessert wine that would be best paired with either a tart fruit plate or creamy cheeses and bread. That being said, this wine is affordable enough that I have indiscriminately consumed it with random dinners several Fridays in a row now, so in my personal opinion, it pairs well with just about anything.

This may well be an MVP, though, for anyone looking for a memorable signature drink for an event like a wedding — in fact, it is very similar in flavor and sweetness to traditional almond-flavored wedding cake (or Bride's Cake, if we're going with the best Bluebell ice cream flavor known to humankind). The best part is, there's really no harm in trying it for yourself — at $5.99, it's not much of a financial risk. The risk of having to tell your friends that your fave wine is basically a grownup almond juice for the rest of your life, however, is about to get pretty darn high.