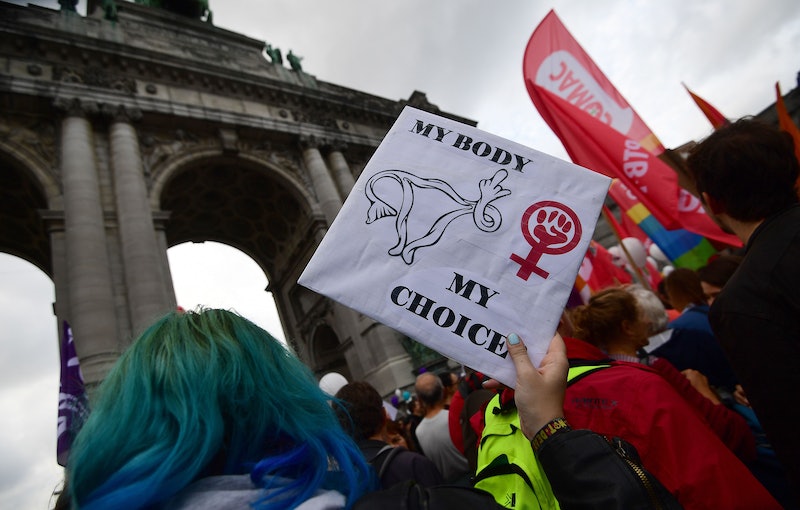 As the battle against women's reproductive rights continues in the U.S., a new study is giving us a glimpse at what happens when the women's health isn't prioritized at all. According to a report from the World Health Organization (WHO) and the Guttmacher Institute published in The Lancet, nearly half of abortions worldwide are unsafe, putting women at risk for serious complications. Researchers found that 25 million unsafe abortions took place every year between 2010 and 2014 — about 45 percent of the 55 million abortions that happen annually.

“Increased efforts are needed, especially in developing regions, to ensure access to contraception and safe abortion,” Bela Ganatra, the lead author of the study and a scientist at WHO who studies reproductive health and research, said in a press release. “When women and girls cannot access effective contraception and safe abortion services, there are serious consequences for their own health and that of their families. This should not happen. But despite recent advances in technology and evidence, too many unsafe abortions still occur, and too many women continue to suffer and die.”

The study not only looked at the safety of abortions performed, but the reasons that women did or didn't seek out safe abortions, if they were available, and found that stigma played an appreciable role. "Young women who seek abortion (including from trained providers using evidence-based methods) sometimes turn to unsafe methods to manage bleeding and delay seeking care for complications because of costs and fear of stigma, exposure, and legal repercussions," wrote the study's authors. They noted that further study is necessary to "quantify abortion stigma to understand its implications for safety and quality of care."

A majority of the unsafe abortions from the study happened in Africa, Asia and Latin America. Unsurprisingly, these are also regions of the world home to countries with super strict anti-abortion laws. In Indonesia, for example, you must have your spouse's approval and be facing life-threatening risks in order to to have a legal abortion. Brazil only allows abortions if a woman has been raped or if pregnancy is endangering the patient's life, which forces women to risk their lives getting unsafe abortions. The WHO study reports that about one-third of abortions are performed by medical professionals using an unsafe method, which is itself shockingly awful, but it gets even worse. About 14 percent of procedures are performed by people with no training — that's more than 1 in 10 abortions. These were termed the least-safe abortions, and providers often offered herbal mixtures or used non-medical foreign objects during the procedure. The risks of an abortion performed by someone who's unlicensed include hemorrhaging, infection and uterine injury.

It may seem as if this is only an issue in far-off countries, but here in the U.S., we've already seen the consequences that abortion restrictions have on women's health. The far right is already talking about what will happen if another Supreme Court justice dies or retires before 2020. Anti-abortion activists hope to see President Trump pick a conservative similar to recent appointee Neil Gorsuch, because the anti-choice movement could have a fighting chance of overturning the Roe v. Wade verdict if that becomes reality. This new research shows the danger of this rhetoric. In countries with open access to abortion, almost 90 percent of procedures are safe. In countries with ultra-strict laws, the number of safe abortions drops to 25 percent.

North America and western and northern Europe all have some of the lowest abortion rates globally. These regions also have progressive abortion laws when compared to other parts of the world. Additionally, almost all of the abortions performed in these regions are safe. According to the findings from this report, banning abortion doesn't stop the rate of abortions. It just makes the procedure less safe for women.

So how should the world respond? For starters, make women's reproductive health a priority, provide family planning resources and provide contraceptives and access to safe abortion, the report says. In the U.S., with lawmakers trying to make it harder to access safe abortion, we should take a hard look at this research and ask ourselves if we want women's lives to be endangered. Before Roe v. Wade made abortion legal nationwide in 1973, women resorted to unsafe, painful methods and had to deal with the fear of being abused by illegal abortion providers. Let's not go back in time.

More like this
5 Ways To Stand In Solidarity With Women In America From The UK
By Sophie McEvoy
How To Fight For Reproductive Rights, Based On How Much Time You Have
By Courtney Young
The UK Abortion Laws In 2022, Explained
By Sophie McEvoy
How Getting An Abortion Has Changed From The ’60s Through Today
By Amanda Chatel
Get Even More From Bustle — Sign Up For The Newsletter