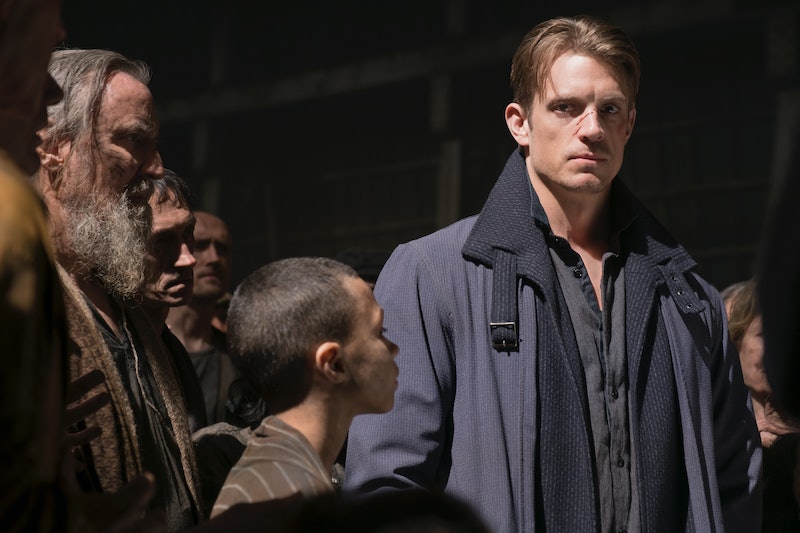 The whitewashing of Asian roles in Hollywood is about as common as Bruce Willis holding up a gun, so it shouldn't come as much of a surprise to find out that Netflix's new show, Altered Carbon, is a warped mess that makes whitewashing — the taking of an Asian character and making him or her white — a convenient plot point in order to prioritize a white male lead. The show might not be guilty of whitewashing in the traditional sense (the science-fiction aspects of the plot and its source material complicate things a little), but the fact remains that Altered Carbon prioritizes a white male lead above an Asian protagonist, and it's just as bad as whitewashing.

Following in the footsteps of Ghost in the Shell, which recently was the subject of a flurry of criticism over a very similar issue, Altered Carbon tells a science-fiction story of an Asian soul and mind trapped inside the body of a white person. In the future world of the show, a person's consciousness is downloaded into what's called a "stack" located at the top of the spine. Bodies, called "sleeves," are just temporary, as stacks can be implanted into an infinite number of sleeves. In the first episode, the Japanese Takeshi Kovacs, a former soldier, wakes up in the body of a white man, played by Joel Kinnaman. Resurrected 250 years after his stack was imprisoned, Kovacs now finds himself at the mercy of one of the most powerful and rich men in the universe (who is also white).

To be fair to Altered Carbon, this is exactly the plot of the original book upon which it is based. The book is told from the point of view of Kovacs, a Japanese narrator living inside the body of a white man, and frequently discusses the difference between Kovacs' ethnic identity and his body. The show, however, never seems interested in exploring this complexity. Though the audience knows that the real Kovacs isn't white — there are, at least, flashbacks to moments in his childhood, which use Asian child actors — his internal monologue about the frustration concerning the disconnect between his body and his identity is never made explicit.

Still, those associated with the show have been quick to defend it by noting that the white body is crucial to the plot of the original Altered Carbon novel. "Whitewashing is when you have an Asian character that gets played by a white person. Here, it's an Asian character that gets put into a white body and that is the story; that's how it is described in the book," Kinnaman told Radio Times.

Kinnaman is right: At its core, Altered Carbon is the story of a biracial Asian man, played in flashbacks by Will Yun Lee, trapped in the body of a white man. However, that doesn't mean that the show is not guilty of prioritizing a white body over an Asian one, as whitewashing is prone to do. For example, Kovacs' white body was hand picked by a powerful, rich, white man, a seemingly innocent plot point that actually reinforces the idea that a white body is more valuable than an Asian one.

Furthermore, it is Kinnaman's body — Kovacs' white sleeve — that is sexualized in the first few episodes. Shown almost naked, with only flattering lighting and a towel to preserve any sort of modesty, it is his white body that the audience is encouraged to lust after. Again, this puts value on a white body over an Asian one, promoting the stereotype that white men are heartthrobs while Asian men are not. (The classification of Asian men as somehow unattractive is so prevalent, Steve Harvey made a joke about it on daytime television just last year.)

At its core, Altered Carbon is the story of a biracial Asian man trapped in the body of a white man. But that doesn't mean that the show isn't guilty of prioritizing a white body over an Asian one, as whitewashing is prone to do.

In the book, first-person narration is used to remind readers of Kovacs' ethnic predicament, but even when a voiceover appears in the show, it is not used to the same effect. The narration, which first appears in Episode 2, offers no real insights into Kovacs' experience as an Asian man living in a white body. And, to make matters worse, the narration of Kovacs' inner thoughts is not in Lee's voice, but in Kinnaman's — prioritizing the white body as the protagonist yet again.

In fact, the way Altered Carbon unfolds, it's quite happy letting you forget that race or ethnicity plays any part in Kovacs' character at all. Born in the body of a biracial Asian man, even Takeshi Kovacs' name, which comes from his white father, feels purposefully non-Asian. In the show, everyone around him calls him "Kovacs" or "Tak" (which conveniently sounds like "Tuck"), allowing for the viewer to forget that inside this white man's body is an Asian man. Without insightful narration, visual clues, or auditory reminders, the viewer is, for the most part, free to see Kovacs as white.

The show only reminds the viewer of its Asian protagonist in brief flashbacks peppered throughout the series' 10 episodes, where Lee appears as Kovacs. And even then, the glimpses are too few and far between for the audience to really latch onto him as a protagonist. The fact that Lee is not the first embodiment of Kovacs the audience sees also does not help. Instead, the first episode features Byron Mann, another Asian-American actor, playing one of Kovacs' many sleeves in a chaotic and confusing scene that's only explained later. Lee, as Kovacs' original self, doesn't get significant screen time until Episode 7, long after the audience has identified Kovacs with Kinnaman's white body.

Showrunner Laeta Kalogridis has suggested that Mann's casting in the first episode is evidence that Kovacs preferred to live inside Asian bodies like his own. "I take great pride in the fact that we have honored the fact that Kovacs, up until the point [of the show]... he chooses people of Asian descent because that's what he [prefers]," Kalogridis said in an interview with io9. Unfortunately, however noble the intent, it does not translate on screen. Altered Carbon never shows how Kovacs chose his sleeves prior to the events of the show, nor does it emphasize any emotional connection Kovacs might have to his Asian appearance. Whatever intentions Kalogridis had, they remain just that: intentions.

There are many things Altered Carbon could have done to raise up their Asian protagonist in the series. They could have cast Lee as the lead instead of Kinnaman and established that, though the audience was seeing this Asian man, everyone else was seeing a white body. (This trick has been used in many television shows, including Charmed and Ghost Whisperer, in which audiences were reminded of the protagonists' changed appearances with the odd reflection.) Or they could have given the narration to Lee, establishing his voice as Kovacs' definitive, inner self. Or they could have made Kovacs' biracial and Asian identity a significant part of the narrative. Alas, they did none of those things. And once again, an Asian protagonist is left out, pushed aside in favor of a white hero.

More like this
What’s New On Netflix: A Victoria Justice Rom-Com & The Return Of David Letterman
By Arya Roshanian
'Doctor Who’s New Star Is Already Huge On TikTok
By Maxine Harrison
What’s New On Netflix: The Return Of 'Bling Empire' & A Rebel Wilson Comedy
By Arya Roshanian
'Who Killed Sara?' Won’t Return For Season 4
By Brad Witter
Get Even More From Bustle — Sign Up For The Newsletter