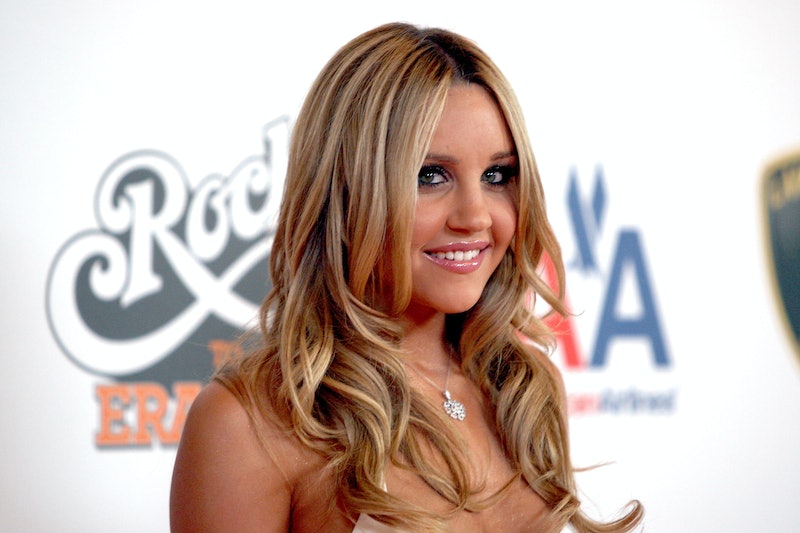 Good news, 2000s fans: After a tumultuous few years, Amanda Bynes is officially ready to act again. The actor, who's been largely withdrawn from the spotlight since around 2012, sat down with Hollyscoop’s Diana Madison on Friday for her first interview in about four years (though she's given intermittent life updates on Twitter). Bynes revealed that she's now three years sober and finally beginning to plan her return to television. As she told Madison,

"I do miss acting and I actually have something surprising to tell you, I’m going to start acting again ... I want to do TV, maybe a few guest spots on some shows that I’m a fan of and maybe another TV show that I’m the star of it."

The news comes after an extensive break for Bynes, who publicly struggled with mental health issues and a slew of legal troubles throughout the early 2010s. She has since enrolled in at the Fashion Institute of Design & Merchandising (FIDM) in Los Angeles, and told Madison that she hopes to start her own fashion line in the future. Bynes explained,

"I've learned how to sew, I've made patterns, and I want to start a clothing line in the future, so FIDM has been helping me with that. Other than that I hike, I go spinning — I take spinning classes — and I feed the homeless."

Beyond the reassurance that Bynes is healthy and thriving, fans will likely be ecstatic to hear she's interested in re-entering the entertainment industry. Bynes was a '00s icon during her early career, lending her acting chops to the childhood-defining Amanda Show, WB sitcom What I Like About You, and a trove of charming rom-coms. What A Girl Wants, She's The Man, Sydney White? Yup, all her. She last appeared alongside Emma Stone in Easy A, in which she played devout Christian teen Marianne Bryant.

Bynes has certainly had a long and rocky journey, but it's heartwarming to hear she's doing well and eager to return to her roots.

More like this
Alicia Silverstone Revives Her 'Clueless' Character In This Super Bowl Commercial
By Jake Viswanath
Ashton Kutcher Wants Danny Masterson “To Be Found Innocent” In Rape Retrial
By Jake Viswanath
The Jonas Brothers' New Album Has A Very Meta Name
By Alyssa Lapid
Cruz Beckham Teased New Music With An Adorable Nod To Mom Victoria Beckham
By Stephanie Topacio Long
Get Even More From Bustle — Sign Up For The Newsletter
From hair trends to relationship advice, our daily newsletter has everything you need to sound like a person who’s on TikTok, even if you aren’t.