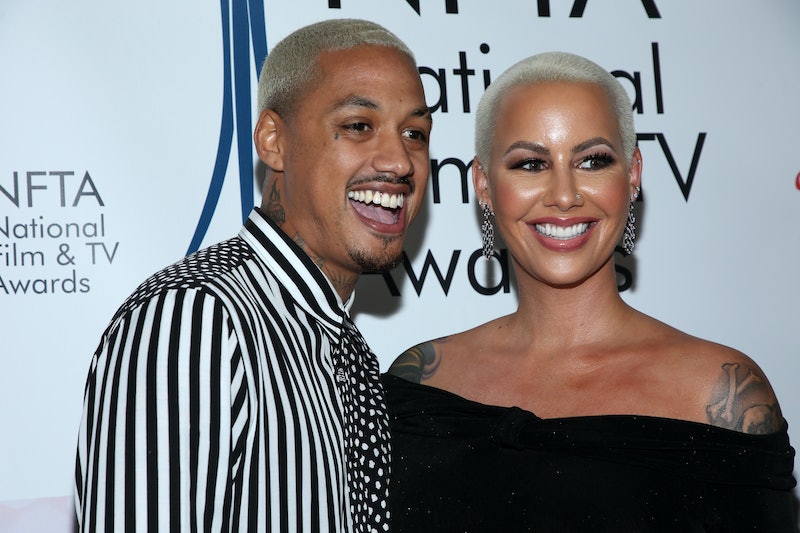 Amber Rose is a mom again after giving birth to a son with boyfriend Alexander "AE" Edwards on Thursday, Oct. 10. And, blending AE's name and the couple's love of music, Amber Rose's baby name is Slash Electric Alexander Edwards. Based on AE's reaction to his child's birth on Instagram, the couple, and big brother Sebastian Taylor Thomaz — Rose's child with her ex-husband Wiz Khalifa — are thrilled to welcome Slash into the world. And at just a few days old, Slash Electric is already a rockstar.

Rose and AE were first reported to be dating by TMZ in October 2018 when they appeared together at Rose's annual SlutWalk. Rose later raved about her relationship with AE on Instagram in January, calling the Def Jam Recordings executive her best friend. And in April, she announced that she was pregnant with the couple's first child. Along with the couple's excitement, Rose added that her 6-year-old son Sebastian was "soooooo happy to be a big brother!"

Though Rose took a step back from social media during her pregnancy, she announced that the time had come to meet her new little one in a series of updates on her Instagram Story early Thursday. And soon after, AE officially announced that the birth of Slash Electric on his own Instagram. "Slash Electric Alexander Edwards.. the world is urs now," AE captioned a photo of him giving his newborn son a kiss on the forehead.

He also called Slash a "rockstar," and the name is particularly fitting considering AE's career in the music industry. But the name Slash also holds significance for Rose. Based on Rose's Instagram, the couple may have chosen the name months before their son's Oct. 10 birth. On April 25, Rose shared a shirtless photo of Slash from Guns N' Roses from the '80s with only the smiley face with sunglasses emoji as a caption. Looking back, it could have been her way of teasing the name of her son.

Moreover, Rose is a huge fan of Guns N' Roses and specifically of guitar player Slash, telling Complex in 2012, "I always looked up to Slash from Guns N' Roses." And in 2017, PageSix reported that she covered her tattoo of Wiz Khalifa with an image of Slash.

Even if he wasn't named after the rockstar, baby Slash Electric is already running around with music royalty. Tyga, who is friends with AE, evidently found time amidst Kylie Jenner reunion rumors to meet baby Slash at the hospital. The "Taste" rapper even shared a video on his Instagram Story of proud dad AE holding his son.

While this is AE's first child, Rose has had years of experience in the parenting department. "As a mom, you have a million different fears," Rose told People in 2016 about being a mom to then 3-year-old Sebastian. "You don't sleep at night. You think about all the worst things that could possibly happen to your baby, and it really sucks." But she added, "Your maternal instinct comes in, and you figure it out along the way. And that's the fun part about it."

This time around, Rose will have experience on her side, plus boyfriend AE and big brother Sebastian to help baby Slash Electric to become the rockstar he was born to be.

More like this
Photos Of The 'Elvis' Cast vs. Their IRL Counterparts Will Have You All Shook Up
By Grace Wehniainen
Cardi B’s New Single “Hot Shit” Features Kanye
By Alyssa Lapid
You Might Want To Rewatch 'Elvis' For This Britney Spears Easter Egg
By Grace Wehniainen
Sadie Sink Would Escape Vecna From 'Stranger Things' With This Taylor Swift Song
By Grace Wehniainen
Get Even More From Bustle — Sign Up For The Newsletter