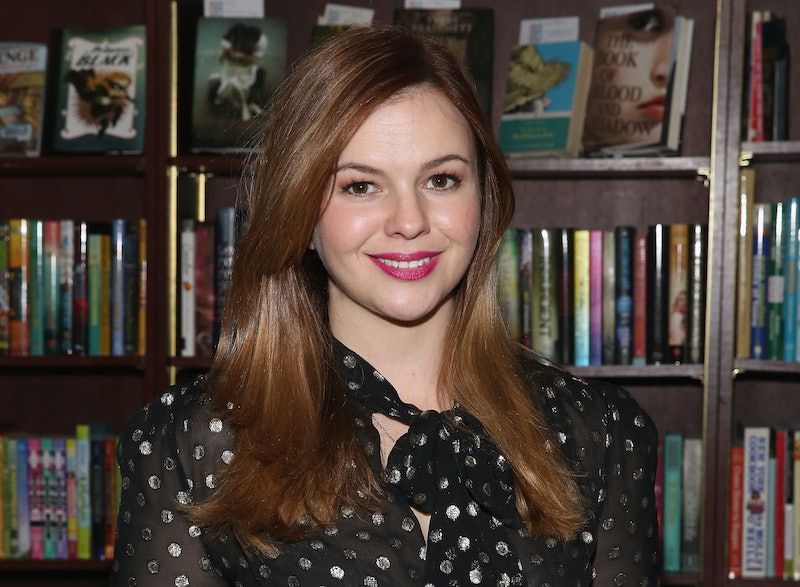 Taking strong political stances on social media as a celebrity can be tricky waters to navigate, but when it comes to female empowerment, actor and director Amber Tamblyn seems to be doing just fine. In fact, Tamblyn's recent comments on white feminism show that she's ready to not only challenge long-standing patriarchal systems, but she wants to dive into biases that live at the intersections of race and sex — even if that means calling herself out, too.

Tamblyn is known for offering unyielding support to Tarana Burke's #MeToo movement, and according to a new BuzzFeed profile, the Sisterhood of the Traveling Pants star was part of the group of women in Hollywood's Time's Up movement since its inception. Creating spaces where women can safely speak about their experiences, both good and bad, seems to be Tamblyn's goal. “Women, especially actresses, don’t speak about [abuses] because you’re trained not to,” she told BuzzFeed.

It's customary for women to keep their history of abuse and harassment under wraps, often out of fear that by speaking out against men in power, they'll be reprimanded, or have their reputations crucified in the process. And when it comes to women of color, the risks of losing everything heavily outweigh those of white women. #MeToo and Time's Up are actively striving to change the norm, and as a result of her involvement, Tamblyn has taken on a seemingly radical stance — believing all women and their claims immediately, and in turn, forcing men to prove that they're innocent. As she told BuzzFeed, "I actually now will choose to believe the woman first without evidence. I don’t trust the American judicial system to tell us."

However, Tamblyn's stance was challenged in October 2017 when actor, comedian, and musician Charlyne Yi accused Tamblyn's husband, David Cross — a man in power — of "mocking her Asian heritage" during their first meeting, around 10 years ago. According to Yi's claims, after making fun of the actor's ripped clothing, Cross "said to me 'what’s a matter? You don’t speak English?? Ching-chong-ching-chong.'"

"I can tell the difference between this man making a joke vs condescending me," Yi said in a tweet following. "This happened 10 years ago. I sure as hell hope he's changed."

In a statement on Twitter, Cross claimed to have remembered the interaction differently and said that he was surprised by the accusations. "I am NOT accusing Charlene of lying, and I’m truly sorry if I hurt her, it was never my intention to do that," he wrote. Cross may not have intended to offend Yi, but the impact of his reported actions were harmful and counterproductive to everything that his wife, Tamblyn, fights so hard to defend publicly.

Of course, the Yi and Cross situation led to folks demanding an explanation from Tamblyn. Was she going to stick up for her husband without even listening to Yi's claims — calling her a liar and insisting that the Asian-American woman can't take a joke? Or would she follow through on her mission, believing women and their claims first, forcing men to prove their innocence?

In her own way, Tamblyn did the latter, tweeting that Yi's "feelings/safety are all that matter," adding that she "spoke to Charlyne. I believe her. I’m about HER feelings/emotional health right now, not Twitter’s." Her response didn't sit will with some, leading to Tamblyn being labeled as a "white feminist," as opposed to an advocate for issues surrounding women of color.

However, she expanded on this in her latest interview, telling BuzzFeed:

“David can feel emphatically that what he did was not racist, or a racist gesture, and I believe that’s true. I know that can be true for him. I also know that a joke that he might say to a Zach Galifianakis or a Michael Cera, when you say that to a young Asian-American woman, you have changed the conversation. Context is everything."

If anything, Yi having the platform to share her grievances — and having them not only heard, but taken seriously — made Tamblyn even more passionate about the cultural shift. She explained, "I hope that more women are able to just tell their stories publicly, and simply." And even though Yi's speaking out against her husband apparently resulted in threats toward Tamblyn's family, she's still able to find the silver-lining in the situation — Yi, a woman, and more specifically a woman of color, was heard, and believed, and that's progress.

“I think we need to sit in anger for a while, and that’s OK. I’m of that mind, I really am. And even when I get called on my own sh*t, whether it’s white feminism, or people asking me to be held responsible for something my husband did, or whatever it is across the board, I accept it.”

She also added, "The anger has been deep for a long time, and now the volcano is erupting. Whether or not that hurts you, or hurts me that you say it, we need to f*cking hear it."

With Time's Up, Tamblyn believes that this very anger is finally being paired with action. The women in Hollywood-led initiative was announced on Jan. 1 in a manifesto signed by a massive group of leaders in the entertainment industry, with a mission to see that all women, of every race, sexual orientation, and in every industry, are protected against workplace abuse or harassment of any kind. According to the open letter, tolerating such behavior would no longer happen, and so a legal defense fund was created to help women afford proper representation if they decide to seek justice.

Tamblyn, taking part in the inner-workings of the movement, feels like this is the step in the right direction, but also believes that in order to dismantle the patriarchy, and racially oppressive systems completely, another shift has to happen. "There’s a lot of work to be done," she explained to BuzzFeed. "But you have to start putting women, and especially women of color, in positions of power and authority immediately. Not in a while, but immediately."

And according to the interview, she's willing to see that our current state changes "by any means necessary" — even if that means challenging her own privilege.