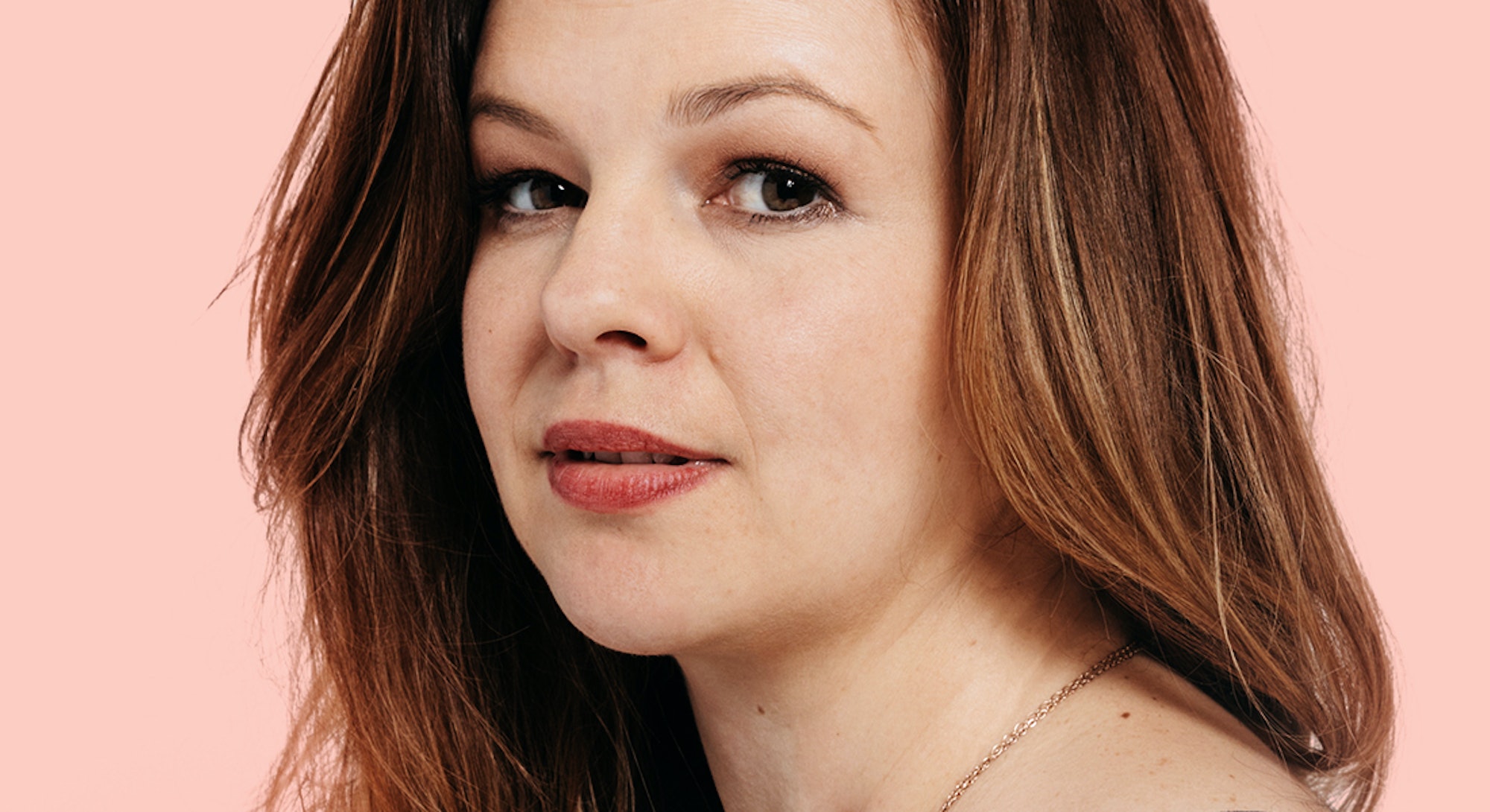 To say that Amber Tamblyn has been feeling political lately is an understatement. Currently, the actor's social media feeds are filled with statistics about health care and reproductive rights; in January, seven months pregnant with her daughter, she attended not one, but two Women's Marches; back in October, she announced her pregnancy in a Glamour op-ed that hinged on her support for Hillary Clinton. Yet if you ask Tamblyn — as many have done, according to the star — when her life and work suddenly became so timely, prepare to receive a laugh and an eye roll.

"There’s no such thing as non-activism in the life of a woman, and certainly not in the life of a woman of color, I would imagine," the 34-year-old says, speaking at Bustle's New York office in mid-May. "Or any minority, or any person that’s been marginalized. That’s a privilege that you get to have if you don’t need to be fighting for either your life or art or body."

For those who only know Tamblyn as one-fourth of the Sisterhood of the Traveling Pants or a supporting player on lighthearted shows like Two and a Half Men, her recent efforts might come as a bit of a surprise. In the past few years, the star has published a book of poems, Dark Sparkler, all about child star deaths; stolen scenes in several hard-R episodes of Inside Amy Schumer; and, most recently, directed a dark drama about women and grief, called Paint it Black, which hit theaters May 19. It might seem like Tamblyn has made a purposeful choice to change up her image during such a politicized time, but as the actor states, that couldn't be farther from the truth — the reality is that embracing life as an activist wasn't a decision, but a simple fact of her existence as a woman.

Paint it Black, which Tamblyn both directed and co-wrote, explores womanhood in all its messy, complicated forms, with Alia Shawkat and Janet McTeer starring as the girlfriend and mother, respectively, of a young man who's committed suicide. It's a striking film, many years in the making (Tamblyn first optioned the rights to the Janet Finch novel it's based on back in 2012, several years after her friend Amy Poehler gave her a copy of the book), but it's disturbing, too, showcasing sides of its female characters rarely seen in film.

"I really want to write about women, but I want to write and show them as what they really are, which is everything, all encompassing — they’re everything from incredible to absolutely awful, ugly, violent, dangerous, uninteresting, non sexual," Tamblyn explains. "Whatever the archetype is that we’ve created about what the contemporary woman looks like, I want to destroy it. I want a woman to look almost like nothing we’ve seen women look like before."

As the mother of a newborn daughter (Marlow Alice turned three months old on the day of our interview), Tamblyn's own womanhood is constantly on her mind these days. She carries Chimamanda Ngozi Adichie's Dear Ijeawele, Or a Feminist Manifesto in Fifteen Suggestions around in her bag near her breast pump and bottles of milk, and views Adichie's ideas about the patriarchy's effects on motherhood as undeniable truths.

"Every mother wants to be perfect," Tamblyn says. "But for me, what’s so important is I want [Marlow] to know that she has ownership over her body and the rights of her body and that she can do what she wants with it, and she needs to keep it safe. And in a world where we have a president who’s a sexual predator, and who also speaks out against women’s rights and just doesn’t seem to really care... I want her to know she has a strong mother to love her, but also, I want it to be honest. I want her to know that she has a mother who’s terrified, as well."

Since Donald Trump's election, Tamblyn has been in a group text chain with Poehler, Amy Schumer, Lena Dunham, America Ferrera and a few others, a "sacred" space where the women talk "candidly and openly" about their hopes and worries during his presidency. Many of them, including Tamblyn, were fervent Hillary Clinton supporters, and seeing Trump's ascent over the last few months has "kind of broken us," she says. "It made you feel like well, if she can’t do it, if Hillary Clinton can’t do it, then nobody can do it.... like damn, if they can’t see her for what she is, then they can’t see any of us for what we are."

"But then it also kind of lights a fire under your ass at the same time," Tamblyn continues. "It makes your art stronger and makes you want to just keep working harder and pushing harder and doing the things that really matter to you and having something to say in the world."

For Tamblyn, right now, it all comes down to Paint it Black. Her text-chain sisterhood (both Traveling Pants members and non) came out to show their support at the movie's May 15 premiere, and praise-filled reviews have already begun pouring in. Speaking about the film, Tamblyn is proud and protective, understandable for a director who's spent the last decade or so with it never far from her mind. It's an attitude that did her well during the movie's making; she recounts fighting through pushback to get the film made in the exact vision she imagined it. "I don’t know if that’s the Taurus in me or whatnot, the bull, but I just really, really, did not take no for an answer," she recalls. "And if somebody said no based on whatever myriad of reasons, I turned elsewhere."

As a famous, white woman, Tamblyn is undeniably privileged, and her fight to get her voice heard is certainly easier than it would be for many other people. Yet that doesn't mean it still hasn't taken a toll. "I’m certainly tired of taking it, of taking the what I call ambush misogyny, where it just goes dormant for awhile and then snaps back into public view whenever a woman tries to do something she’s not supposed to be doing," she says.

She's especially done with being "policed" for her opinions, and being told to have more understanding for people who don't agree. "We're not interested artistically in coming together, in the sense of unifying the country and unifying people to understand each other’s common causes," she says, referring to her creative friends. "I don’t feel that way. I feel like I’m at war against people that hate me, and hate people that I love, and hate people of color, and hate people who are trans. So I’m not interested in coming together with those people. And if I have to take a more hard line in order to get across how unacceptable that is, then that’s the world I choose to live in."

In other words, if she has to piss off a few people in order to get her message heard, so be it; she's used to it, anyway. Women who use their voices have always been magnets for criticism, but Tamblyn, for one, will never let that stop her from demanding the rights she knows her fellow ladies deserve — in fact, it'll only make her fight even louder.