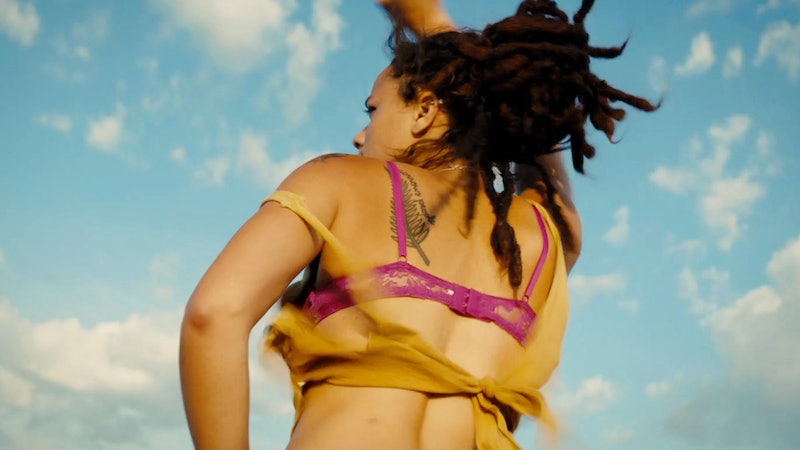 American Honey, a road drama film from director Andrea Arnold might just be the most underrated movie of 2016. The movie, which won four British Independent Film awards (at least it's got recognition across the pond ) and then swept the United States by way of limited release, tells the story of Star, a troubled teen portrayed by debut actor Sasha Lane. In a recent feature from the film which showcased the beautiful cinematography of the film sweeping landscapes and all, Lane and another actress from the film, Riley Keough (Elvis' granddaughter, guys!) talked about the "lost" people with whom American Honey hopes to relate.

American Honey follows a "mag crew," a traveling group of teenagers as they drive across the Midwest selling door-to-door subscriptions. Star, who runs away from her dysfunctional family to join the crew, immediately falls in love with another youth involved in the gang as a top salesman, Jake (Shia LaBeouf). Throughout the film we catch a glimpse of a lifestyle on the fringe — full of partying, law-breaking, and lust-filled teen love.

In the brief feature, Lane mentions this wild teenhood saying the movie is "about a representation of what America's supposed to be like...representation of all the discarded kids people just refuse to acknowledge."

Riley Keough, who plays the tough and domineering leader of the mag crew, also points out that the film is meant for the "lost" stating, "I hope it makes people who feel a little lost or who are missing something, I hope it fulfills them in some way."

Both actresses seem to agree that the film has "universal" appeal. As Lane puts it, the message of American Honey is "don't let your fears get in the way. You just gotta live. Things can be crappy, and people can be complicated, and life can be complicated but there's no judgement...and just be free and just kinda let go a bit."

If you're hoping to capture some of the deep feels brought on by the "youth, and dreams, and love" of American Honey, the film is available on Youtube, Google Play, and Vudu. Don't forget your tissues!

The film will be available on Blu-ray and DVD Tuesday Dec. 27.