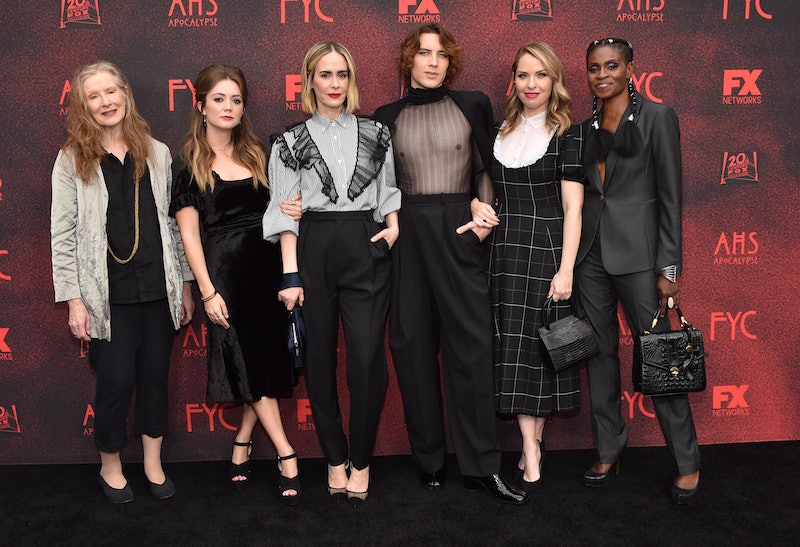 If Ryan Murphy's latest Instagram post is any indication, America is about to get even scarier. On Monday, May 11, the acclaimed TV producer shared a photo of a Zoom chat with the cast of American Horror Story, but the caption is where things get interesting. Ryan Murphy seemed to announce an American Horror Story spinoff is in the works. Bustle has reached out to Murphy's reps for confirmation of the reported news, but did not receive an immediate response.

It's unclear whether Murphy was simply tossing out an idea or if the series is already in the works, but the pitch he described is for an hour-long episodic anthology series called American Horror Stories. The idea is very Twilight Zone-esque in that each episode would present a self-contained story. However, given the casual nature of the announcement, it's hard to tell if the series has been officially ordered by FX (or another channel/streaming service) at this point or not.

The American Horror Story reunion Zoom call sounds like it allowed Murphy and his regular cast members like Jessica Lange, Sarah Paulson, and Evan Peters to cover quite a lot of ground. "American Horror Story cast zoom call...where we reminisced about the good times...the spin off we're doing called "American Horror Stories" (one hour contained episodes)...when we will start filming the next season of the mothership...and other stuff I cannot print," the producer wrote.

Like most of the TV shows in Hollywood, production on American Horror Story Season 10 has been delayed due to the ongoing coronavirus pandemic. But given the sheer number of shows that Murphy currently has in the works, it's not surprising that he's still working on new ideas during the shutdown. The super producer recently had his second series under his lucrative Netflix deal, Hollywood, premiere on the streamer. Additionally, he has a new season of American Crime Story, a One Flew Over the Cuckoo's Nest spinoff starring Paulson, and a second season of Politician, among other projects.

Adding an American Horror Story spinoff to the list would seem daunting to most producers, but Murphy appears to thrive on work. And more importantly, his idea could expand the long-running show's universe in new and exciting ways. With an episodic anthology approach, the show could attract big name actors who would otherwise be unavailable for entire seasons, or it could potentially explore existing characters within the universe of the series in a way that the mothership doesn't allow.

As American Horror Story heads into its 10th season (with at least three more planned after that), American Horror Stories could keep the franchise fresh, while also pushing it in new directions. Murphy has always known that America is a scary place, and seeing him continue to find new ways to bring that horror to the small screen is exciting — no matter what stage of development this potential project may be in.