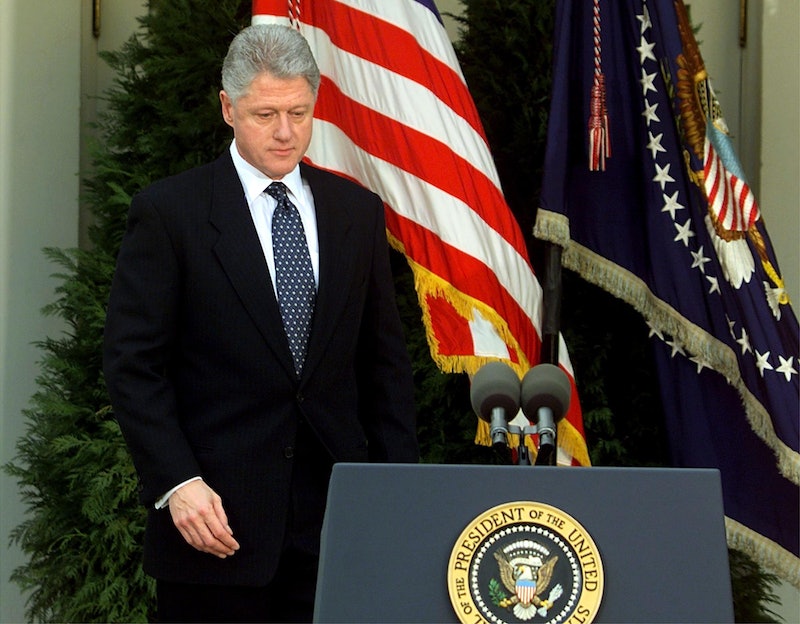 Looks like America has another stalled impeachment on its hands. FX postponed the Impeachment: American Crime Story release date from this September until likely after the 2020 presidential election. Announcing the news at the 2020 Television Critics Association winter press tour on Jan. 9, per The Hollywood Reporter, network chairman John Landgraf cited creator Ryan Murphy's busy schedule for delaying the limited true crime series, which will follow the events surrounding President Bill Clinton's 1998 impeachment by the House of Representatives.

Landgraf explained that Murphy would not be able to start production on Impeachment until March 21, and "that means we won't be physically done shooting episodes until October, it's a long production," according to THR. (Murphy is currently directing The Prom with Nicole Kidman and Meryl Streep for Netflix.) As for when FX will premiere Impeachment, Landgrad added he "would say it's TBD at this point."

The third installment of the anthology series (previous seasons included 2016's The People v. O. J. Simpson, as well as The Assassination of Gianni Versace in 2018) already has much of its cast in place, however. Variety revealed in November that Clive Owen will play Clinton, and among his costars will be: Sarah Paulson (Linda Tripp), Beanie Feldstein (Monica Lewinsky), and Annaleigh Ashford (Paula Jones). Writer Sarah Burgess based the script on Jeffrey Toobin's 1999 book, A Vast Conspiracy: The Real Story of the Sex Scandal That Nearly Brought Down a President. Lewinsky will also serve as an Impeachment producer, per Vanity Fair.

FX had previously faced backlash for its decision to air the show just weeks ahead of the 2020 election — though Landgraf reportedly insisted that did not factor into the network's decision to postpone the show. In Aug. 2019, he defended the project's then-projected late Sept. 2020 airdate to reporters. "I've read it, I think it's great. I don't believe it's going to determine who is the next president of the United States," he said at the time, per THR. "Of the notion that it could influence 2020 election results, I think that's a little hysterical, from my standpoint."

For his part, Murphy had predicted in November that Impeachment's production start date might be pushed back, due both to his work on Prom, and Paulson "taking a couple of months off for her transformation" as Tripp. "I know that a lot of people have big opinions about . . . when that will air," he said in an interview with Deadline. "I think that idea of impeachment obviously with Trump is fascinating. I wouldn't say that we're changing things that much or mentioning Trump at all in our narrative."

Whether or not current events have any affect on production, fans will have to wait a bit longer than anticipated to see Clinton's scandal get the American Crime Story treatment.

More like this
Everything To Know About The 'Daisy Jones & The Six' TV Series
By Maxine Harrison and Brad Witter
'The Crown' Season 6 Has Suspended Filming "Out Of Respect" For The Queen's Death
By Bustle Staff
This First Look At 'The Gold' Shows Jack Lowden In A Whole New Light
By El Hunt and Sam Ramsden
Linda Ronstadt’s “Long Long Time” Plays A Pivotal Role In The Last Of Us
By Brad Witter
Get Even More From Bustle — Sign Up For The Newsletter
From hair trends to relationship advice, our daily newsletter has everything you need to sound like a person who’s on TikTok, even if you aren’t.