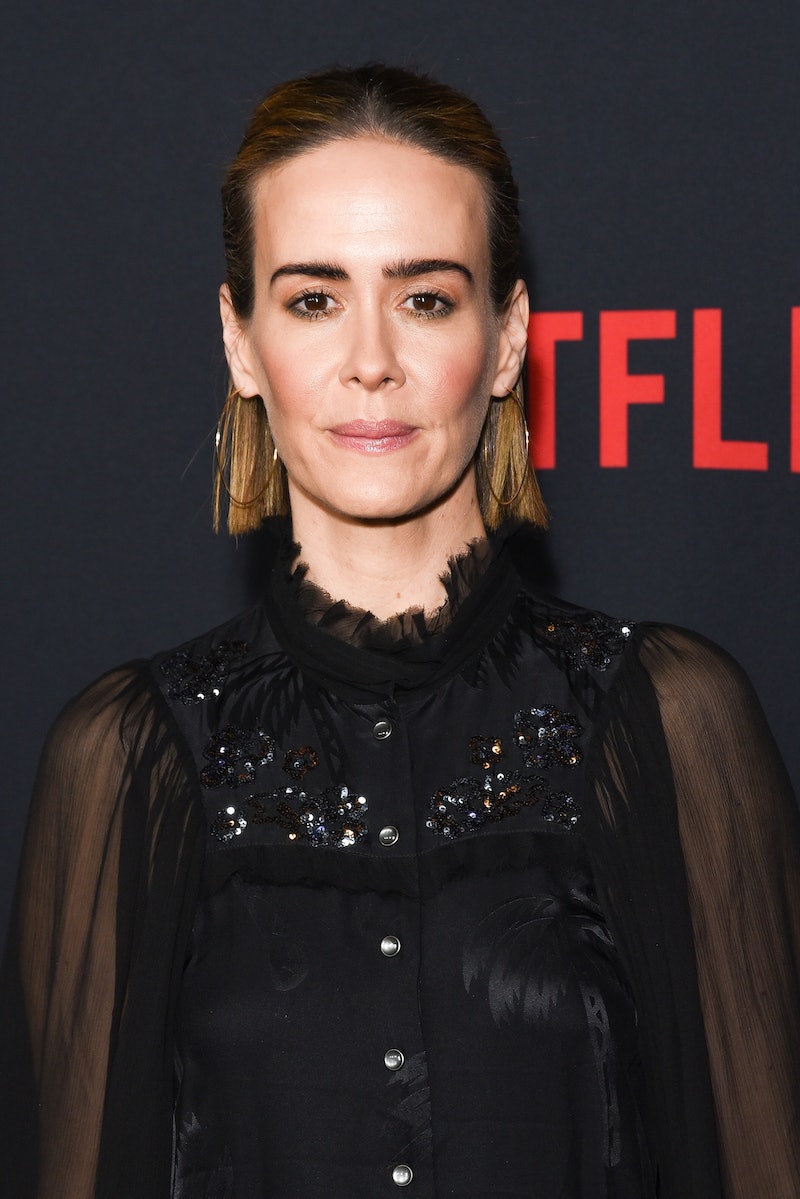 Now, this could be the scariest thing to ever happen on American Horror Story, so prepare yourself. Sarah Paulson won't star in AHS: 1984. But before you begin booking yourself in an "Asylum" or joining a "Cult" dedicated to all things Paulson, hear us out.

While Variety reported that the Emmy-winning actor will not be claiming a central role in the new season, which returns September 18, a cameo appearance is still totally possible. Sources told the trade publication that a brief role is "possible," even though she won't be occupying a significant lead for the ninth installment. 20th Century Fox Television and reps for Paulson declined to comment to the outlet.

News of Paulson's limited, if any, screen time in AHS: 1984 is surprising considering she's the only one of the show's mainstays to make appearances in all eight prior seasons. In most, she's played a major role, including Lana Winters in Asylum and conjoined twins Dot and Bette in Freak Show. However, fans may remember the actor, who has picked up five Emmy nominations for her work on the anthology so far, only appeared in three episodes in Season 1 of AHS, Murder House. So, a smaller role wouldn't be completely unprecedented.

Paulson's dance card is looking pretty full these days. Her upcoming projects include two series: FX's Mrs. America, which follows the ratification of the Equal Rights Amendment, and Netflix's Ratched, the origin story of the titular nurse from the movie One Flew Over the Cuckoo's Nest.

American Horror Story mastermind Ryan Murphy is also a creator on the latter series, and Paulson's résumé is full of projects from the super producer. Previously, the performer won an Emmy for playing Marcia Clark on Murphy's American Crime Story: The People v. O.J. Simpson and assumed the role of Geraldine Page on Feud: Bette and Joan. So, it makes sense that Paulson might need to take a step back from AHS for now, even as she makes it clear her collaboration with Murphy has no end in sight.

As for American Horror Story: 1984, not much is known about the next season. In April, Murphy released a teaser on his Instagram, which announced the vague title. The preview alluded to an '80s slasher theme. He confirmed shortly after that Emma Roberts, who has also co-starred on various seasons, would be joining the cast. However, fellow regular Evan Peters won't be on AHS Season 9, despite having also been on every season. Although his need to "sit a season out," indicates a return is probably in the cards.

In terms of plot, all involved are keeping tight-lipped. We do know that Roberts and Olympian Gus Kenworthy will play boyfriend and girlfriend during the season, a relationship that could go awry if previous seasons of the anthology have taught us anything.

So, if we've learned anything, it's that cast members may come and go, but the power of Murphy is forever. Jessica Lange has taken breaks on American Horror Story and returned to fanfare. We trust that Paulson will make her triumphant return soon, too.

More like this
Peaky Blinders Won’t Return For Season 7 — But A Movie Is In The Works
By Brad Witter
The ‘Love, Victor’ Showrunner Gave Fans Hope For A Possible Spinoff
By Brad Witter
The Magic Is Over For Charmed
By Kadin Burnett
Legacies Showrunner Said There Is Still Hope For More Vampire Diaries
By Gretchen Smail
Get Even More From Bustle — Sign Up For The Newsletter