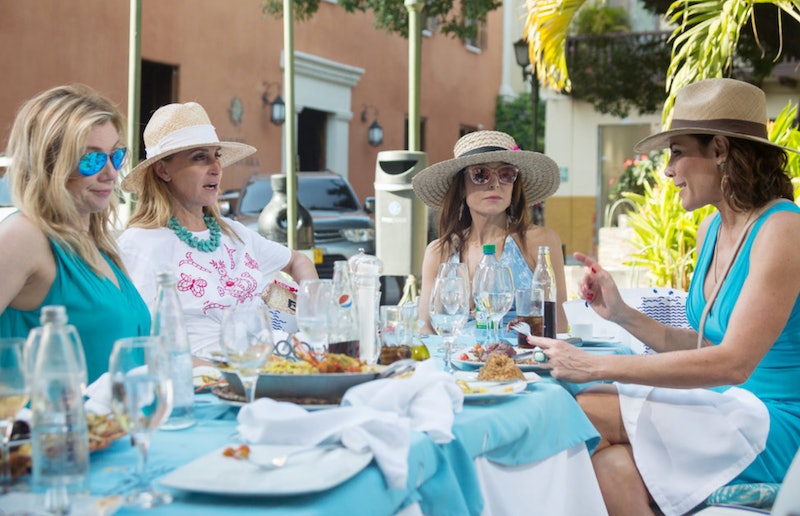 The Real Housewives of New York City boat ride from hell has come and gone, and what a riveting journey it was. While many Bravoholics savored every bit of the dramatic excursion, Andy Cohen did not like watching the boat ride from hell. When the King of Bravo sat down with Us Weekly at the Television Critics Association press event on Thursday, Aug. 2, he said he found the footage to be captivating, suspenseful, and not the least bit entertaining.

“I wasn’t happy about the boat because it was a horrible thing that happened. A lot of people found it very entertaining. It certainly wasn’t entertaining to me when I heard about it or to the women when they were on it. I think that it made for dramatic, gripping television but in reality, it was nothing that we would have wanted to happen.”

OK, yes. You make a solid point, Cohen. The cast, production crew, and boat crew were all trapped on a watercraft that a) got tossed around by unrelenting waves, b) experienced significant technical difficulties, and c) was maybe missing life jackets? Inhaling their very real peril like it's a bag of Mother's Circus Animal Cookies probably isn't the best look.

But wow, what a scene.

Wednesday night's episode of RHONY Season 10 was the episode viewers have been waiting for since February 19. For on that day, Page Six reported the RHONY cast endured a “boat ride from hell” while filming in Cartagena. An insider claimed to the site the vessel's "engine caught fire" and "the crew was fighting to put it out."

“Bethenny [Frankel], Ramona [Singer] and Dorinda [Medley] were soaked and screaming hysterically, Carole [Radziwill] and Tinsley [Mortimer] were literally throwing up from seasickness. They were far out to sea and they thought they were going down like the Titanic.”

In a statement to Page Six, a rep for Bravo said,

"The Real Housewives of New York City cast was recently on a boat in South America and encountered turbulent water. Thankfully, everyone is fine and was able to continue their vacation as planned. The safety of our cast and crew is paramount and, to that end, we are doing a full investigation."

Before the speculation and the theories could spiral faster than Tinsley Mortimer's curling iron, King of Bravo set the record straight. A few weeks after the boat ride from hell news first surfaced, Cohen told Entertainment Tonight that the events were "grossly misrepresented." The Watch What Happens Live with Andy Cohen host explained,

"They did have a squirrelly boat trip, but there was no fire. The boat didn't sink. I mean, it's been grossly misrepresented.”

As we saw on Wednesday night's episode of RHONY, there wasn't a fire, the boat did not sink, and everyone made it back to land. And thank goodness for that. Yes, what happened looked terrifying. Yes, the boat ride literally scared the crap out of some of the Housewives. And yes, it all made for captivating TV. But above all else, everyone (well, everyone other than the person who had to deal with Luann de Lesseps's bed at the resort the following day) is OK, and that is what matters.