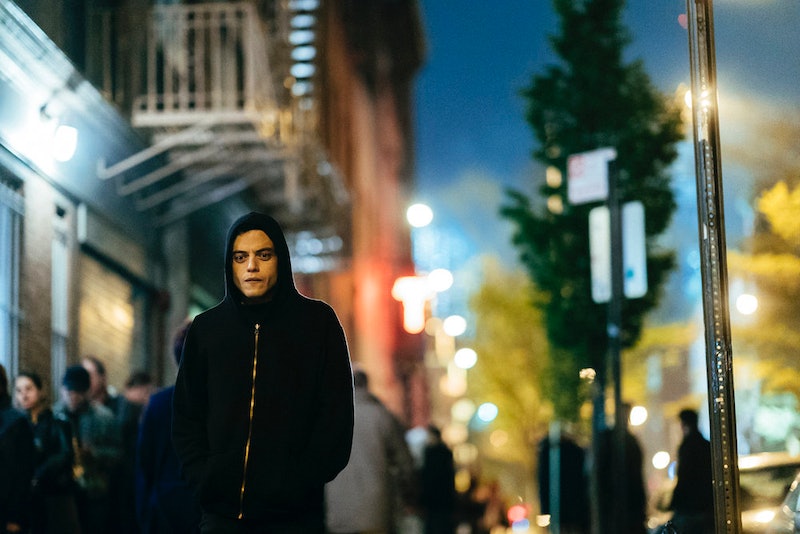 By now, viewers of USA Network's hacker drama are conditioned to expect a big twist — and attempting to predict it in advance has become something of a sport. But even in the realm of the show's previous twists, this single Mr. Robot Season 3 theory may blow your mind. In Season 1, it was revealed that Mr. Robot was the manifestation of Elliot's split personality. In Season 2, it was revealed that much of the season had taken place in a prison where Elliot was serving time. And now, it's possible that Season 3 is building up to some game-changing revelation involving multiple dimensions. Is Mr. Robot actually a show about parallel universes?

The idea that the series would begin exploring alternate timelines and/or realities first started to be bandied about among fans during Season 2, with the seed being planted by Whiterose (B.D. Wong) herself. "Have you ever wondered how the world would look if the Five/Nine Hack had never happened?" her alter ego, Minister Zhang, asked Grace Gummer's Agent Dom DiPierro last year. "In fact, some believe there are alternate realities playing out that very scenario, with other lives we're leading, and other people that we've become. The contemplation moves me very deeply."

But idle speculation turned into active theorizing with the Season 3 premiere, which leaned into these multi-dimensional musings, threatening to tip the show farther into sci-fi than ever before. The opening scene of the season featured viewers' first glimpse into the oft-mentioned Washington Township Plant, the Evil Corp facility where Elliot's father and Angela's mother were both stricken with the cancer that ended their lives — and the plant was revealed to be the home to a complex piece of machinery that some viewers think could be a quantum computer, and others think could be a particle accelerator, or Large Hadron Collider.

Opinion also differs on whether Whiterose is trying to use this mysterious machine to travel back in time to prevent the Five/Nine hack from happening, to prove that their reality exists inside a computer simulation, or to open a portal to a parallel universe. But the evidence in support of the latter theory is starting to pile up to levels that are impossible to ignore. First of all, there's what the scientist leading a tour of the Washington Township Plant said in that opening scene: "If I close my eyes, I can imagine that everything we experience — everything we think, see, and do — is unfolding simultaneously in a parallel universe. And if so, how many copies of ourselves exist? And might our mental states be conjoined, for better or worse?"

If the Washington Township Plant is harboring an LHC, then that certainly lends credence to the parallel universe idea, since the existence of such alternate realities is one of the scientific theories the particle accelerator could prove one day. According to a recent Wired article by Abigail Beall on CERN's Large Hadron Collider, "By smashing subatomic particles together at speeds approaching the speed of light, it can confirm the existence of widely-predicted particles, discover new ones, and could potentially even create microscopic black holes that lead to other dimensions."

Furthering this line of thinking is the presence of a QR code in the Season 3 premiere, which, when scanned, leads fans down a rabbit hole of Reddit threads until landing on a post by user KrullFan, written two years ago, and titled "Gravitational Waves Leaking from Parallel Universe?" The user wrote:

Additionally, there's the fact that the FBI's surveillance program on fsociety is called "Project Berenstain" — a clear reference to the so-called Mandela Effect, which attempts to explain how masses of people can misremember the same thing (like confusing the Berenstain Bears as the Berenstein Bears) as the result of a split from a parallel universe.

Still not convinced that Mr. Robot is about to head down the wormhole of multiple dimensions? How about the fact that creator Sam Esmail has essentially confirmed it… and has even made a movie about parallel universes before? When asked by the New York Times about Season 3's hints at the existence of multiple realities, Esmail wasn't coy about revealing his show's increasing bend towards science-fiction. He said:

"We reveal more of Whiterose's overall plan. It is still cryptic and still a mystery, but she clearly has an agenda and that agenda does involve parallel universes. The most powerful people in the world — not unlike a lot of people in our real world — go after these loftier goals because they can, because they have the money and the power to do so. In the Mr. Robot world there is a character who is fixated on this idea of parallel universes. Do they exist? And can she somehow find a way to harness that?"

Before he created Mr. Robot, Esmail wrote and directed the 2014 indie romance Comet, starring Justin Long and Esmail's own future wife Emmy Rossum. Here's IMDB's official description of the film: "Set in a parallel universe, Comet bounces back and forth over the course of an unlikely but perfectly paired couple's six-year relationship." The surreal film is told in a non-linear way, with flashes back and forth that make the viewer wonder whether what they're watching are merely unreliable memories… or an alternate reality where the relationship played out differently.

Given that Esmail has explored the question of parallel universes in his work before, I think it's safe to say that Mr. Robot's flirtation with the idea isn't a coincidence. But to what end? It's possible that Whiterose has assured Evil Corp that she can use the particle accelerator to conjure a reality where the Five/Nine hack never took place, and the corporation never lost its data. But will she actually use it for that stated purpose… or for her own nefarious agenda?