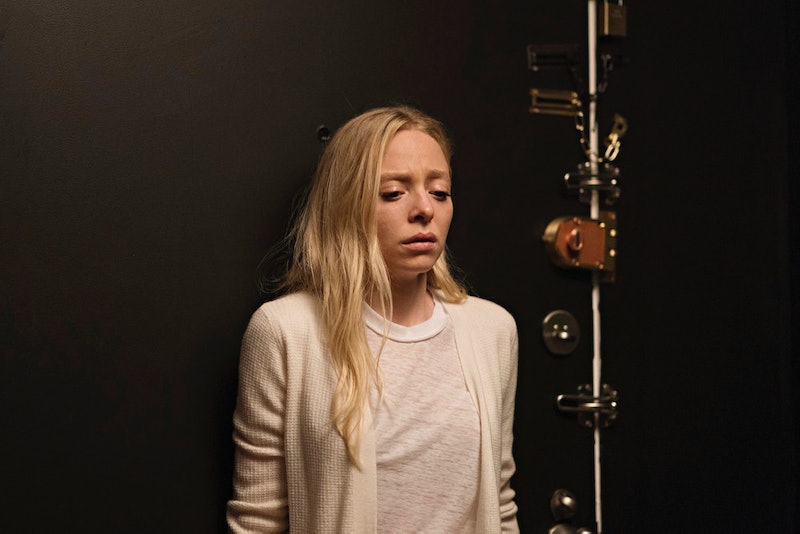 She started Season 3 full of confidence, Angela Moss' mental state has undergone an extreme shift. Spoilers from "Eps3.8_stage3.torrent" follow. Who is Angela talking to on Mr. Robot? When Leon appears in Elliot's apartment, Angela believes that Elliot is betraying her. She decides to flee, and it seems that she believes someone else is with her in her apartment as she packs up. Then, when a van picks her up (presumably the Dark Army), she speaks in first-person plural when she says, "We're ready." Has she, like Elliot, started to imagine another person in her presence? Or, as I suspect, does this all have to do with Whiterose's plan that Angela trusts so fully? Because based on the crazy connections that "Eps3.8_stage3.torrent" established between Angela, Elliot, and Whiterose, you might start believing in whatever Whiterose told Angela too.

The previous episode "Eps3.7dont-delete-me.ko" ended on a hopeful note for Elliot and Angela as he forgave her for secretly working with Mr. Robot. But it was short-lived. Yet, even before Leon, the Dark Army lackey, appears, Angela is confrontational as Elliot asks her to clarify what Whiterose told her. She takes the fact that Tyrell has been named CTO of E Corp as a sign that "we're going back to the way that things should be." And when Elliot questions her, she says, "I thought that you wanted our parents back."

So although the Dark Army blew up 71 E Corp buildings and thousands are dead, Angela is still onboard with Whiterose's mysterious plan. Angela does not reveal any details to Elliot, but time travel or alternate universes are some fan theories. Whatever or whomever Angela is addressing in "Eps3.8_stage3.torrent" could be a sign that Mr. Robot is truly going into a sci-fi direction.

Angela's apartment has transformed drastically since viewers last saw it with many items covered in plastic. Other items seen in her apartment are direct callbacks to the penultimate episode of Season 2, "Eps2.9pyth0n-pt1.p7z," when the Dark Army captured Angela and brought her to a home in the suburbs. Like at that home, Angela's walls are plastered with photos of people with their faces covered by red, orange, and yellow-colored squares. She also has a "Hang in there" cat poster, red rotary phones, and multiple copies of Lolita. (Angela makes sure to grab the books as she frantically packs for a getaway.) As The Hollywood Reporter discussed last year with Mr. Robot technology producer and writer Kor Adana, all of these things were present in the room when Angela first met Whiterose during "Eps2.9pyth0n-pt1.p7z."

In "Eps2.9pyth0n-pt1.p7z.," a younger-looking Angela doppelgänger interrogated Angela before she was able to meet Whiterose. Mabel Tyler played the young girl who interviewed her. (Tyler also played the younger version of Angela who was featured in the flashback at the beginning of the Season 3 episode, "Eps3.5kill-process.inc" — and there are plenty of theories on Reddit that exist about this fact.) The girl asked Angela, "Is the key in the room?" Eventually, Angela looked to the Vladimir Nabokov book and said, "The key was in my fist. My fist was in my pocket."

Angela's answer is a quote from Nabokov's Lolita. In the book, narrator Humbert Humbert is sexually obsessed with his 12-year-old stepdaughter Dolores Haze, whom he calls Lolita. As Observer noted, the disturbing full line from Lolita is, "And she was mine, she was mine, the key was in my fist, my fist was in my pocket, she was mine." This isn't the first time that Lolita has been directly referenced in Mr. Robot and some have theorized, including Vulture, that there will be a pedophilia plotline in the show because of the references. Another potential clue from this Season 2 scene is that there is a leaking fish tank, and that the koi fish inside of it dies before Angela talks with Whiterose. The death of the fish demonstrated how long Angela had to wait for Whiterose, but the fish in general might be particularly important to what's currently happening with Angela.

When Angela announces, "We have to get moving. We're not safe here" during the latest episode, there appears to be no one else in her apartment. You could say she's simply talking to herself because of her mental state, but she approaches what looks like to be a fish tank when she says, "You ready?" The fish tank also seems to be in her cart when the Dark Army van pulls up, she thinks she must bring the fish — or whatever else could be in there — with her to meet Whiterose.

Don't forget that Elliot hallucinated talking to his betta fish all the way back in the fourth episode of Season 1. Through his drug-filled visions in that episode, there are even more connections to Angela's interactions with Whiterose. When Elliot goes back to his childhood home, a young girl gives him a key. One Reddit user theorized this was connected to Angela's Lolita quote about the key.

Later, after the betta fish talks to Elliot, Angela is eating a fish at a restaurant. Even though it's a completely different fish, Elliot says that's his friend. Elliot then sees his mom force-feeding fish to a younger version of himself. The key also comes back to play in this scene since Angela sees it and thinks Elliot is proposing to her. The scene then jumps to Angela and Elliot at Coney Island and Angela says to him, "You're not gonna do it, are you? Change the world. Figures, you were only born a month ago."

Reddit users have also discussed theories on Angela and Elliot having their parents' personalities implanted in them or Angela's mom being cloned. The line about Elliot being born a month ago might be evidence to some of these claims. After all, Whiterose told Angela, "It's no coincidence that you and Mr. Alderson became who you are after what happened with the Washington Township plant so many years ago." So while Elliot was hallucinating everything in that Season 1 episode, the connections between those delusions and what Angela experienced when she met Whiterose shouldn't be overlooked.

Another tidbit of information that can't be ignored is Angela's connection to Phillip Price. Price is infatuated with Angela and based on a flashback in this episode, he hired Allsafe because Angela worked there. I previously theorized that Price was the anonymous person who was financially supporting Angela's mom Emily when Emily was dying. The description for the Season 3 finale says that "Angela considers the price," so exactly why Price is so invested in Angela may finally be revealed — and perhaps that's where the Lolita references will come into play.

So while Angela is most certainly not well mentally, the objects that she is so fixated with in "Eps3.8_stage3.torrent" might actually lead viewers to find out what Angela so desperately believes in. And there's no doubt in my mind that part of the key to unlocking this mystery lies in Angela and Elliot's past, their dead parents, and yes, potentially even a dead fish. Though some Mr. Robot theories seem too fantastical for the show, as Whiterose said to Angela, "Well, I guess it all depends on what your definition of real is."