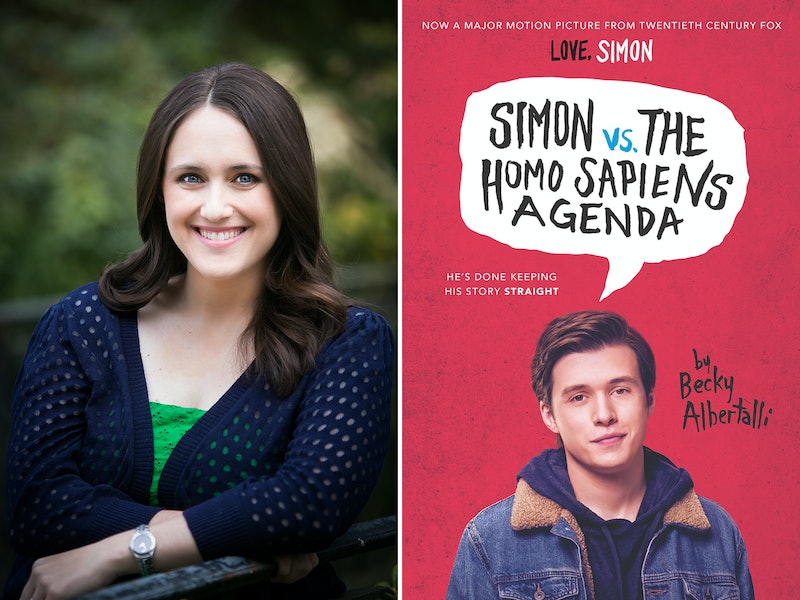 Photo of Becky Albertalli, courtesy of Decisive Moment Events
By Kerri Jarema
May 30, 2018

When Love, Simon — the film adaptation of Becky Albertalli's YA novel Simon vs. the Homo Sapiens Agenda — was released in March 2018, it was the culmination of a months-long love fest for the story, the film's cast, and of course, the creator of Simon herself. After a series of special screenings and social media outreach, it seemed that Simon was all anyone could talk about, and for good reason. The story of Simon Spier's coming out is undeniably one of the most influential YA releases of the past few years.

"I think it's hard to know when I'll be able to start processing everything. I'm still working on the fact that I even have a book published," Albertalli tells Bustle. "It's been very exciting, and there's been some highs and lows of course, but I feel very lucky. It's been a very cool year, a year of massively checking off things on my bucket list — things I would have never even thought to put on my bucket list."

Just some of those huge milestones include the premiere of Love, Simon to both audience and critical acclaim; the release of the Simon book sequel Leah on the Offbeat, which debuted at number one of the New York Times bestseller list; and now the release of Love, Simon on digital on May 29 and on DVD on June 12.

"I loved being part of all of the premieres and screenings and getting to share that with an audience. But at the same time, I am really excited to be able to have this intimate moment with the film, and I think it's really special to picture other people having that moment with this film — especially the teens who maybe really need it," Albertalli says. "Access to this story will be greatly expanded, and teens who maybe weren't able to get a ride to the theater, or were too shy to go to the theater, will finally get to experience it, too."

Simon vs. the Homo Sapiens Agenda by Becky Albertalli, $6, Amazon

"And those are three things that I am not going to do," Albertalli says. "Some of that is because I really like to write about couples getting together. So as much as I think about Simon and Blue being married and being together forever, I don't necessarily want to write about that. But more importantly, I want to be mindful of representation, and be careful not to overstep when it comes to writing characters that have certain intersecting marginalizations that I don't share and that are really underepresented in YA. I am aware of how much space my book — especially a book about Blue — would take up."

"...I want to be mindful of representation, and be careful not to overstep when it comes to writing characters that have certain intersecting marginalizations that I don't share and that are really underepresented in YA. I am aware f how much space my book — especially a book about Blue — would take up."

For now it seems that Albertalli is content to keep the Simonverse alive through its existing forms — and through memories of her experience on the Love, Simon set, including one particularly funny moment between her friend and fellow YA author Adam Silvera and Love, Simon star Nick Robinson that she can't help but laugh when she recounts.

"I don't know if we've talked about this publicly before, but Adam Silvera came to shoot the Halloween party scene, and it was his first time on set, so I was introducing him to people," Albertalli says. "But we needed to have like five or six introductions between Adam and Nick Robinson before Nick was able to shake Adam's hand. Nick was always carrying something, or he was eating chicken wings and had sauce on his hands, or he had a cold — it got to the point where it was just like, ridiculous. But I think Adam ultimately did get his handshake."

And Albertalli's adventures with Silvera are only going to ramp up in the coming months. Their first book together, What If It's Us, is coming out on Oct. 9, 2018. The emotional rom-com which is set in New York and follows Arthur and Ben on a series of meet-cutes, is sure to fit right in with Albertalli's past releases — though the collaboration process was entirely new.

"It was the best writing experience of my entire life. Now when I write I'm just thinking, 'Why do I have to do this without Adam Silvera?!' Writing with Adam is just so much fun, and we very much had our hands in each other's pots, so to speak. When it came to writing Arthur, I would take material from Adam, or borrow ideas, and vice versa. And we exchanged chapters very early, which was different for us both, because I needed to know where Adam was going with Ben's voice so that I could write his dialogue in my chapters. So we have our handprints all over each other's chapters."

But beforeWhat If It's Us hit shelves, Albertalli will be staying busy with lots of events this summer, from a June 7 talk at the Library of Congress to an August 8 panel at the Mississippi Book Festival with fellow authors Rose Brock, Angie Thomas, Nic Stone, Julie Murphy, and Nicola Yoon. First up, though, is Albertalli's maiden voyage to Book Con in New York City on June 2 and June 3.

"I've kind of wanted to go for years and I've also been kind of scared," Albertalli says. "But now is the time, I'm gonna do it."

There won't be any arguing here — now is definitely Albertalli's time.