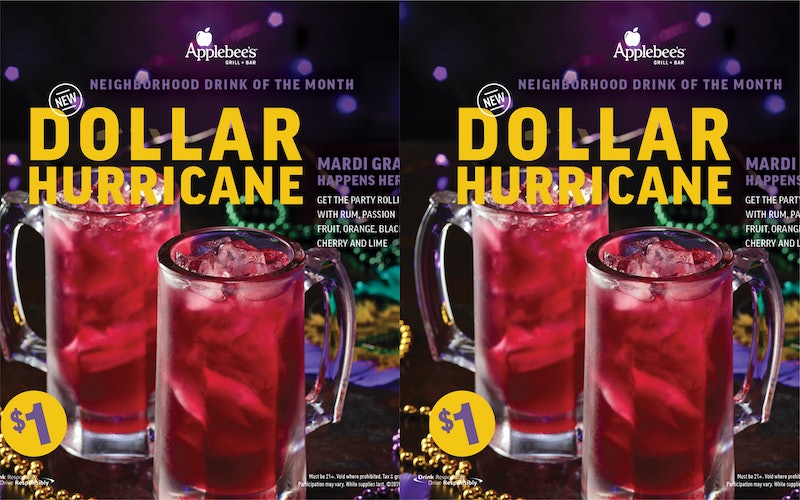 This January may have lasted approximately seven years — a truly shocking phenomenon that I fully intend to grill January Jones about as soon as I get the chance — but it is with great relief that I inform you all that it is finally coming to an end. And just as always, with the beginning of a new month comes all kinds of delights: new horoscopes to give you mild existential anxiety, new checks to accidentally write the wrong month on, and, of course, Applebee's Neighborhood Drink of the Month for February 2019, which happens to be a Mardi Gras-themed Dollar Hurricane.

For those of you who have gone so deep into the tunnel of January that you forgot there were months on the other side, Mardi Gras will fall on Tuesday, March 5 this year; that said, Applebee's has decided to kick off the festivities early with this new drink, which is, per Applebee's, a "delicious fusion of rum, passionfruit, orange, black cherry and lime." More to the point, it is a dollar, and served in a 10-ounce mug — I don't even need to employ any math to deal you that's a pretty good deal they've got going there. And if none of this were enough to compel you to get to Applebee's this month, the Dollar Hurricane is served with a free masked stirrer or decorative beads, so you can fully get into the spirit as you digest your spirit. (Forgive me, it's a Wednesday, I need this.)

The drink will be available all through the month of February, and then again on Tuesday, March 5, to ring in the Mardi Gras celebrations. Here's a picture of it, so you can start coordinating your outfits for the group Insta.

“The Hurricane cocktail is a classic rum drink with close ties to New Orleans and Mardi Gras,” said Patrick Kirk, vice president of beverage innovation at Applebee’s, in a press release. “A DOLLAR HURRICANE is a great reason to celebrate the season and from now until March 5, Applebee’s is going to ‘party like it’s Mardi.’”

If you, like me, are embarrassingly up-to-date with the current drink offerings at Applebee's, then you might be aware that the introduction of this Neighborhood Drink means the end of January's; and while the Captain & Cola had a glorious 31 days in the apples and bees, it is time now for it to rest, and give way to this majestic magenta concoction.

If you're still in the mood for something vaguely nautical, though, Applebee's also has a bright blue "Shark Bowl" cocktail that comes with a lil' shark gummy on the top — plus it's a slushy, so you already know, by the Law Of Alcoholic Slushy Drinks That Are Slightly Unnatural In Color, that it will be delicious. Make sure you take advantage of that Dollar Hurricane while you can, though — February is the shortest month of the year, so it'll be gone before you know it!