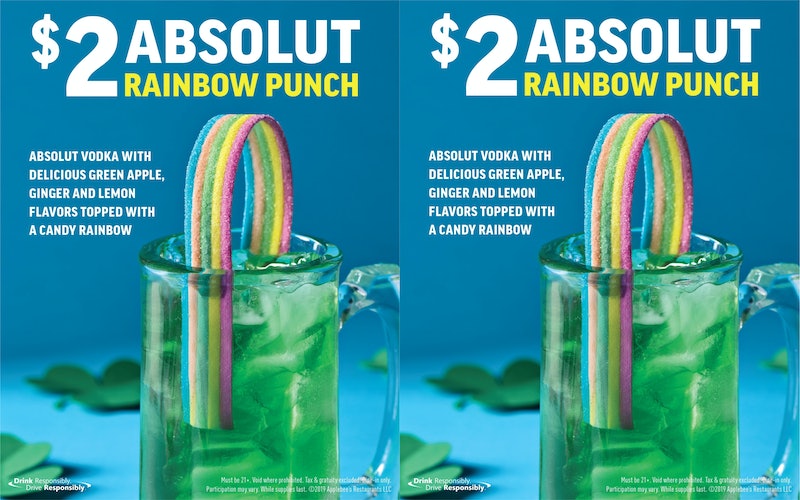 If you spent your whole life trying to find the pot of gold at the end of the rainbow (and/or protecting your Lucky Charms along the way), excellent news: that rainbow just got a whole lot easier to chase. In true Applebee's fashion, the chain is releasing its Applebee's March 2019 Neighborhood Drink of the Month, which is — brace yourself — ABSOLUT Rainbow Punch. It's green, it's glitzy, and it's basically all the best parts about St. Patrick's Day shoved into a cup and put on ice.

The drink, which will retail for $2 each, is "an authentic punch made with ABSOLUT vodka and the combination of green apple, ginger and lemon flavors, topped with a rainbow gummy garnish," per Applebee's. The chain did not specify whether you or no you're in danger of turning into a leprechaun like that one Disney Channel Original movie we're still not sure if we all collectively dreamed up, but I guess that kind of question is one only true Rainbow Punch pioneers can get to the bottom of this month. If they plan to, though, they'd better act fast — like most of Applebee's Neighborhood Drink of the Month deals, this one will only last until the end of the month it was introduced.

Speaking of how those deals usually end, it's worth noting that this month is actually a rare exception to the rule. You may remember that Applebee's launched a Dollar Hurricane — basically a magenta extravaganza combining all of your favorite fruits and rum — in February, as an early celebration of Mardi Gras. Keeping in line with the upcoming festivities, the Dollar Hurricane will also be available at Applebee's through March 5. What that means for you, fellow Applebee's consumer, is that for a mere three dollars, you'll be able to celebrate Mardi Gras and St. Patrick's Day in one sitting. Millennials are nothing if not efficient.

As for the ABSOLUT Rainbow Punch, that's basically 10 straight ounces of green liquid luck, so I doubt you'll need anything else to sustain you once the Dollar Hurricane runs its course.

“We created a crisp, refreshing cocktail to help us forget about the rough winter we all went through,” said Patrick Kirk, vice president of beverage innovation at Applebee’s, in a press release. “So, we made a vibrant green punch, packed it with flavor, and topped it with a rainbow. Literally, it comes with a rainbow that you can eat!”

Although the eating is the most important part of having a gummy in front of you, don't you dare forget to Instagram it and share this majestic rainbow concoction with the rest of the world. The good people at Applebee's did not spend the entirety of February coming up with this Instagram bait so you could deny your followers photos of it in March. Until then, go find all your green clothes and assemble the squad for a night out — at Applebee's, St. Patrick's Day lasts all month long.