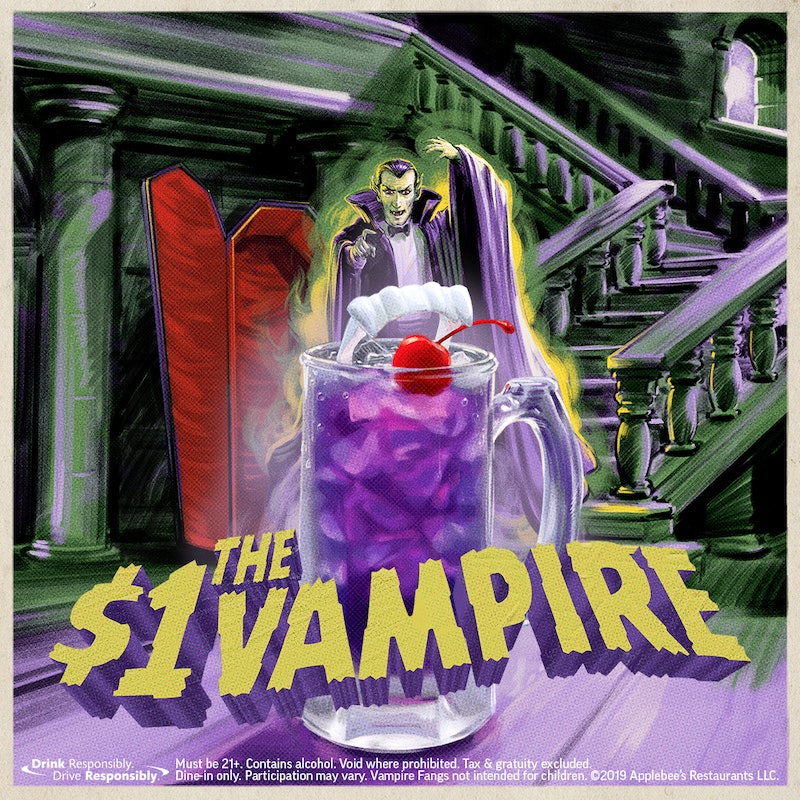 Applebee's has made its inventive one-dollar drink deals that drop every month an icon in chain restaurant dining, but they are arguably at their peak during spooky season. Case in point, Applebee's October 2019 Neighborhood Drink of the Month, which is called the $1 Vampire. The drink, which will retail for one dollar all October long, is the bright purple cocktail of your dreams — and comes with its own set of vampire fangs, so you can go full method while you're drinking it.

“The $1 Vampire is a freaky tiki drink served with a side of fangs,” said Patrick Kirk, vice president of beverage innovation at Applebee’s, in a press release. “Seriously, where else can you buy a delicious cocktail and walk away with a Halloween costume for only a buck?”

The $1 Vampire also establishes a new running theme for the chain, which is to name its October drinks after your favorite spooky creatures. In 2018, Applebee's October Neighborhood Drink of the Month was the Dollar Zombie. The bright blue concoction featured rum, with flavors of pineapple, passion fruit, cherry, lime, and — according to Applebee's — "brain." (The brain was actually a delightful gummy brain that topped the drink.) Per Applebee's, the Dollar Zombie was a crowdsourced creation, so we can all pat ourselves on the back for unleashing it on this unsuspecting world.

In comparison, in 2017, Applebee's was offering a "Dollarita" in October, which was essentially a $1 margarita. And while that's a deal everyone can get behind — and a deal that Applebee's has brought back in other more seasonally-appropriate months — it is decidedly less spooky than its follow-ups, the Dollar Zombie and the $1 Vampire. The real question now, of course, is which undead creature is going to get drink-ified in 2020. Or if we've run out of undead ones, and maybe it's time to move on to witches, werewolves, or any number of Halloween mainstays that are just begging to be recreated in alcohol form.

If you are, in fact, looking for more ways to get spooky in the alcohol department this Halloween, you have other options at your disposal — Bacardi just released a glow-in-the-dark Jack-o-Lantern bottle that should be hitting shelves in early October. Captain Morgan's Jack-O'Blast rum has also been available to purchase since July, with its similarly festive bottle. But if you're not up to mixing the drinks yourself — or just want to imbibe affordably — you can head over to Applebee's all October long to get yourself a $1 Vampire Fix. Just remember to drink (and haunt) responsibly.