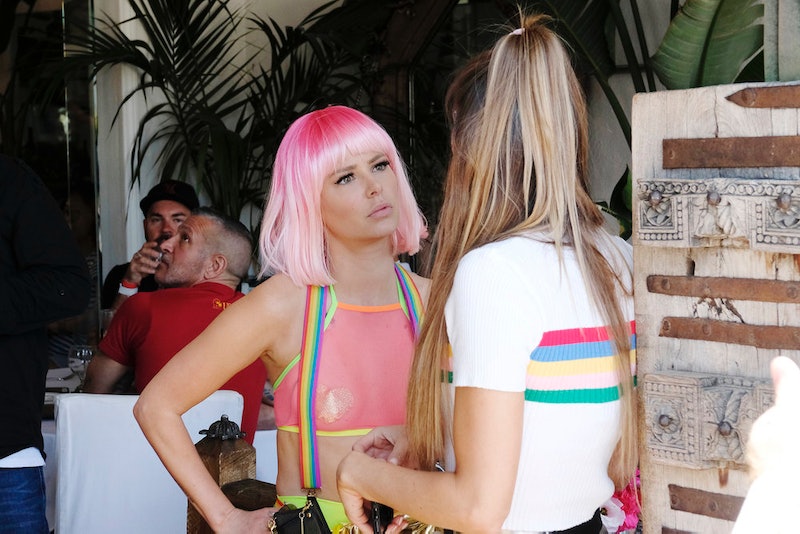 Ariana and Lala both started as outsiders on Vanderpump Rules, so it makes sense that they ended up becoming friends. Compared to the other tumultuous relationships on the show, the two have remained pretty rock solid. But now, Lala is out for blood, and Ariana may be in the way. So are Ariana and Lala still friends?

Both women were initially shut out by Katie, Kristen, Stassi, and the other women at SUR when they joined the show. The two have bonded for various reasons, and they've had a few nice moments over the course of the series. Ariana also understands what Lala is going through with her dad's death, as her own father passed away unexpectedly right around the time she became a more central person in the Vanderpump Rules cast (you know, when Kristen was on the war path about her and Tom's relationship). Ariana has expressed that she wants to be there for Lala, but doesn't agree with the way she's been treating people by channeling her grief into rage. And in a promo for the April 1 episode, it looks like that leads to a bit of a confrontation.

How that plays out, though, isn't entirely clear. Neither Ariana or Lala have posted much about each other on Instagram recently. The most recent photo appears to be a snapshot from their girls trip to Sonoma, which Ariana shared a picture of in mid-February. However, it appears to have been taken over the summer, when the girls trip episode was filmed, as Lala posted the same pic in July. Aside from that, Ariana shared a photo of her and Lala in December. It was just promo for a new Vanderpump episode, but it was posted after filming for the new season had wrapped, and it's a solo shot of the two of them. That seems to point to the fact that they're still on good terms.

Besides, not posting about each other isn't exactly new for them; they've always been pretty low-key about their friendship. But clearly, it runs deep. When, in the beginning of Season 7, Tom Sandoval revealed to Schwartz, Jax, James, and Peter that Lala and Ariana had once hooked up, of course everyone made a bigger deal of it than it was. But because Lala and Ariana hadn't themselves spoken about whether or not they wanted to share that experience to other people (ugh, Sandoval), Lala denied it to Jax and Brittany, and said she would have stuck to the story if Ariana wanted it that way.

It would have been easy for Lala to say, "Yeah, we did that," but it's a testament to her respect for Ariana that she didn't. That's why Lala and Ariana are probably still friends now — they care for each other deeply as people and not just as pretend gal pals on a reality show. Protecting someone — whether from gossip or from grief — is a sign of true friendship, which is why these two will hopefully be pals for a long time to come, no matter what drama is thrown at them.