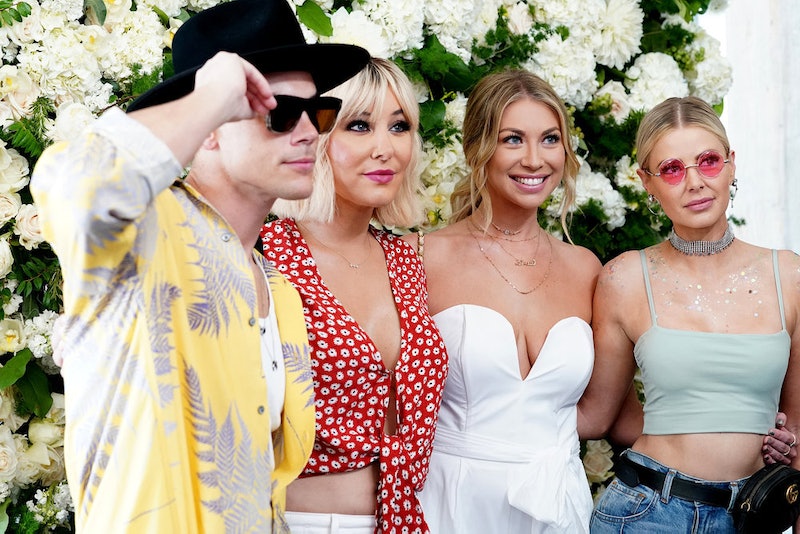 Friendships can go downhill at any point — and especially so if you're on a reality show, where drama and bickering are basically a contractual obligation. Take, for example, Lala and Billie on Vanderpump Rules. The two were thick as thieves in Season 6, but their relationship has now taken a definitive for the worse, and Lala and Billie's friendship timeline shows it's been a long time coming.

Though the show hasn't explained exactly what happened, Lala and Billie are definitely not besties anymore. So far in Season 7, they've seemed distant, but a recent fight pulled them even further apart. After Katie decided to do a "Ladies Night" in place of James Kennedy's See You Next Tuesday, she apparently neglected to tag Billie on social media promoting the event. Billie took this to mean she'd been left out because she is transgender, while Katie insisted she simply hadn't involved Billie in the planning aspect because they weren't on the best of terms, and that she was always welcome to come. It's a delicate situation, but Lala took Katie's side, and from the looks of it, things between her and Billie are only going to get worse.

Let's try and find out where this all went so wrong.

Billie appeared a few episodes into Season 6, and she and Lala seemed to be easy friends. Lala was definitely Billie’s first friend at the restaurant, and they hung out a lot — both at work and off the clock.

Billie decided to go out with Ariana's younger brother, Jeremy, and of course, Stassi had something negative to say about it. Obviously, Billie's excitement about the date deflated, and Lala didn't let Stassi off easy for coming in and pooing all over Billie's potential romance. Lala is always there to stick up for a friend.

Billie Sees A Different Side Of Lala

In a prior interview with Bustle, Billie said that she didn’t like the things that Lala said in her confessional interviews when Vanderpump Rules was airing. "[It] made her look two-faced. One minute, she's friendly with everyone, and the next she's by herself and she’s talking sh*t about everyone," Billie said. "I just noticed that she doesn't put it out there in person, but when it's interview time, she's all about saying negative things. That’s alarming about her and her character."

James Splits The Group In Two

Lala has seen enough of James Kennedy's drunken antics and misogynistic talk, and she was fully on board with his getting fired from SUR. Billie, though, blamed James' outbursts on Kristen Doute, who she said was a trigger for James every time she showed up at SUR (which was often). This only deepened the existing tension between Lala and Billie.

Billie Feels Left Out During Girls Night In

Though Katie, Ariana, Scheana, and even Lisa Vanderpump herself assured Billie her not being tagged had nothing to do with the fact that she is transgender, it's clear this situation opened old wounds for Billie. In response, she lashed out on Twitter, putting her at odds with the rest of the SUR women — Lala included.

Lala & Billie Duke It Out

In the preview for Vanderpump's Jan. 28 episode, Billie and Lala are seen having a screaming match, and Billie yells, "You're not better than me, Lala!" We haven't seen that moment yet, but who wants to bet that it's about this Girls Night Out ordeal?

In a recent appearance on Bravo's The Daily Dish podcast, Lala did not hold back about how she felt about her former friend. "Billie is just a very strange person," Lala said. "I think she likes to stir the pot; I think she’s looking for her five minutes and I gave that to her, so she's welcome, you know." She also called Billie an "extra," which, ouch.

Where do Billie and Lala go from here? For now, they seem better off apart, but you never know — the Vanderpump cast has been able to mend fences before, so next season could bring a reconciliation...if they're able to talk it out.