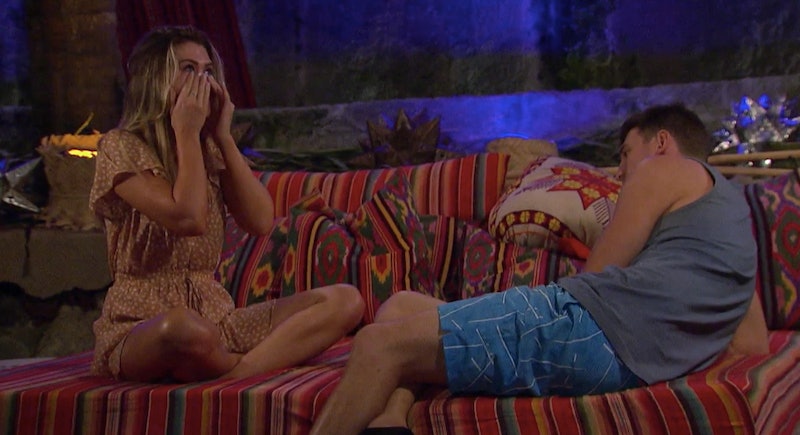 After all of the drama that played out both onscreen and off, it's hard to imagine that Caelynn and Blake are friends after Bachelor in Paradise. Their relationship was on thin ice at the beginning of the season when Caelynn was hurt by his unwillingness to address their reported history together. Things got a little bit better between them toward the end of the season when Caelynn and Dean got together, however, since they returned home and a certain series of social media interactions unfolded, it's highly unlikely that they are just grabbing drinks or hanging out like old buddies.

To recap, according to Caelynn, the two of them had considered skipping coming on the show entirely in order to actually date in real life. That obviously didn't work out, though they did reportedly hookup at the Stagecoach music festival in April, before filming. Caelynn later learned that he had hooked up with their fellow BiP cast mate Kristina the night before, about which she was not very happy, to say the least.

Blake immediately felt attacked, as if both women had waited to confront him until they were on national television. He said he felt like his character was being intentionally smeared by the women, particularly Caelynn, and in an effort to defend himself, he decided to share private text messages between the two of them on Instagram. They reportedly depicted conversations between the two from the night they met up at Stagecoach.

“I hope Caelynn can forgive me one day,” he said on video in an Instagram story. “I’m not trying to go and attack Caelynn, I’m just trying to get my truth out there.” Response to the screenshots immediately exploded and Blake deleted the Instagram Story fairly quickly, though an apology for his overall behavior on Paradise remains on his grid. Caelynn was understandably not happy about Blake’s decision to publicize their private conversations without consulting her.

“I attempted to address my feelings and the situation with Blake face to face,” Caelynn wrote in her response on Instagram. “It’s unfortunate that I didn't get the same respect in return, and I am absolutely mortified our private texts were put out there for the world to see and judge by someone who I trusted and consider a friend nonetheless.” So, according to her comment there, she still considers Blake a friend. Still, all of this happened before the reunion was taped this summer, so there is still a chance that they will work it out on national television.

A good indicator of whether or not two people are on good terms, though, is whether or not they follow each other on social media. And as of September 16, they don’t appear to be following each other on Instagram or Twitter. Still, on August 9, People published an exclusive report in which an inside source alleged that at one point, Blake and Caelynn were actually on the same page. The source proceeded to blame Caelynn for being the first to publicize their private interactions. “He was being accused of some terrible things that could have damaging repercussions, and this was the only way to disprove what she was saying,” the source said. “Nobody would have believed him had he just disputed her claims publicly without proof. It would have been a he said/she said situation.”

Who knows what the real story is at this point. Fans will just have to wait for Caelynn or Blake to clear the air after the reunion special.