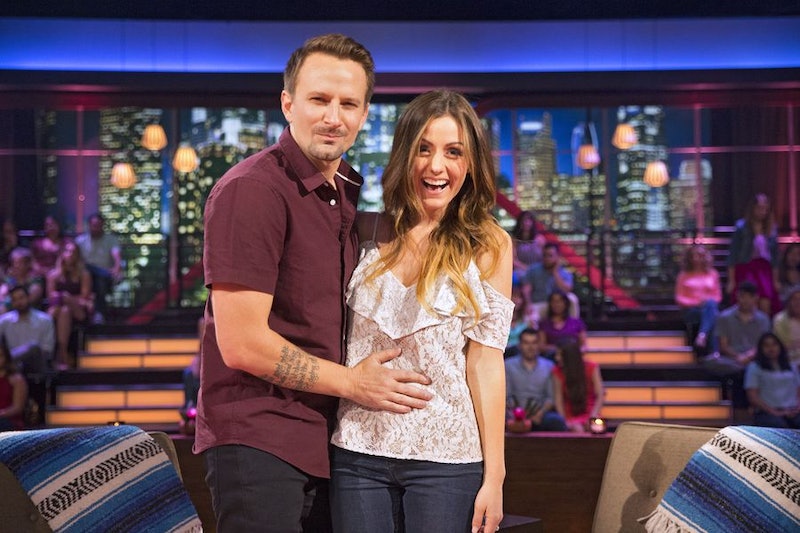 Many Bachelor Nation fans were upset by the surprising ending of the latest season of The Bachelorette, but there is still something for them to cheer about during these tough times: Bachelor in Paradise stars Evan Bass and Carly Waddell are expecting their first baby! The couple met while filming Season 3 of Bachelor in Paradise and became engaged at the end of the summer, and the pair have been getting cuter with each passing day. We all know that Evan popped the question at the end of Paradise last summer but are Evan and Carly married?

The pair did indeed tie the knot earlier this summer, amidst this summer's Bachelor in Paradise scandal, on the beaches of Puerto Vallarta, Mexico. The couple officially exchanged vows on June 17 surrounded by friends and family in a beautiful garden overlooking the tropical waters.

In a joint statement released to People Magazine the couple said, "We had a dream wedding on Saturday. It was truly the perfect day with friends and family in Mexico. There was no better way to celebrate the start of our forever journey together ... Evan's children delivered heartfelt and hysterical speeches that had everyone laughing and crying simultaneously. The love from Bachelor Nation has been overwhelming and we are so grateful to all who helped make this day amazing."

Bachelor Nation was out in full force at the wedding with Chris Harrison officiating the ceremony and fellow alums like Jade Roper, Tanner Tolbert, Wells Adams, Nick Viall, and Vanessa Grimaldi rounding out the guest list.

The newlyweds' baby news was shared in early August, and the couple, who live in Nashville, Tennessee with Bass' three children from a previous relationship, had this to say to People about their upcoming bundle of joy: "We are so happy to be expanding our family as we welcome Baby Bass in 2018."

The two may have seemed like an unlikely pairing while on Bachelor in Paradise but now the couple is quickly becoming one of the cutest matches in Bachelor history. In the current celebrity love world — that has seen the demise of seemingly unsinkable couples like Chris Pratt and Anna Faris — fans can look towards Evan and Carly as a ray of light.

More like this
'Bachelor In Paradise' Finally Announced Its Season 8 Release Date
By Kadin Burnett and Grace Wehniainen
Kim Kardashian Reveals The First Text She Sent To Pete Davidson
By Jake Viswanath
Pete Davidson Pops Up In This Hidden Scene From The Kardashians Season Finale
By Jake Viswanath
Winter 'Love Island' Will Be Back In 2023, ITV Bosses Confirm
By Maxine Harrison
Get Even More From Bustle — Sign Up For The Newsletter