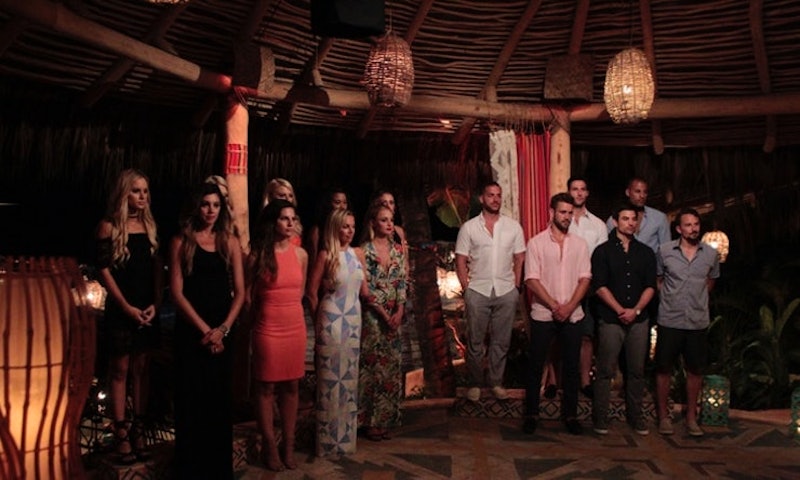 TMZ's sources within production claim that host Chris Harrison hosted a cast-wide meeting on the first day filming resumed after the initial suspension. Reportedly, those Bachelor In Paradise cast members who returned to set after Warner Bros. completed their investigation were given a "dramatic recounting" of the interaction between Corinne Olympios and DeMario Jackson that had halted production. Bustle has reached out to ABC and Warner Bros. for comment on the rumor, but did not receive an immediate response.

Filming on the latest season of Bachelor in Paradise came to a halt in June when a producer filed a complaint against the show after a filmed sexual encounter between Jackson and Olympios. Both contestants were alleged to be inebriated during the incident, and the question of consent was raised. In a statement to E! News, Jackson responded to what he called "false claims and malicious allegations," stating, "I will be taking swift and appropriate legal action." Olympios' attorney Martin Singer alleged that "multiple complaints" were made on his client's behalf and vowed to continue investigating the matter; Olympios later stated that her "team’s investigation into this matter has now been completed to my satisfaction." For their part, Warner Bros. has concluded their own investigation and ruled that no misconduct occurred, clearing the way for filming to resume.

The TMZ sources state that Harrison walked the cast through the poolside incident and explained how their encounter escalated into the producer complaint that briefly brought the future of the show into question. According to TMZ, the whole explanation was reportedly captured on tape, so that BIP audiences will likely be given the same update as the cast once the show airs.

But while the show participants are reportedly satisfied with the explanations provided by its crew, fans will have to wait until Aug. 12 when Bachelor in Paradise Season 4 is expected to premiere to see if they agree. If the report is true, fans will get to watch ABC's summary of the investigation for themselves and draw their own conclusions about the events from earlier this summer.