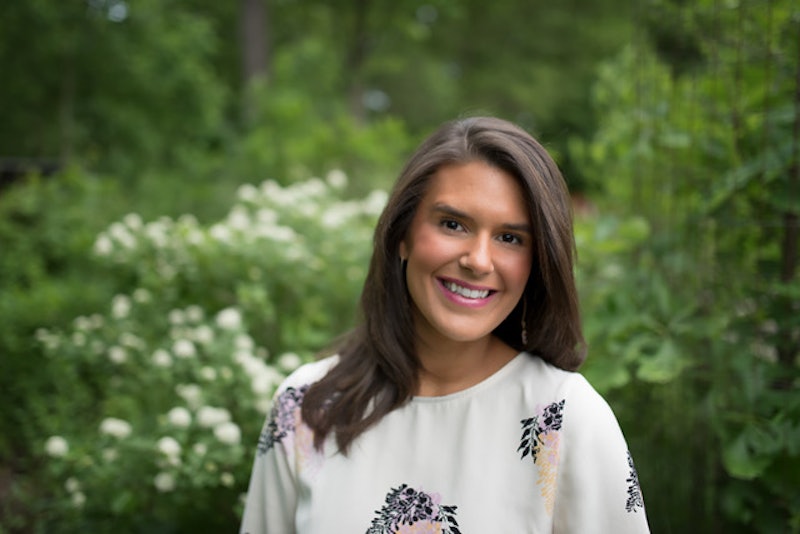 When I was a 20-year-old college student, I started losing weight. At first, it was a product of a health condition; I had irritable bowel syndrome and fructose malabsorption, an extension of the hypersensitivity of my fibromyalgia diagnosis. In a symptom flare-up, I could not eat without getting sick, so I ate less and less just to get through my classes. The more food made me sick, the more I developed a desensitization to it. I didn’t want it anymore, and I didn’t crave it. I ate only when my stomach gurgled and growled. It took a full summer away from college, and tons of work with my gastroenterologist, to get my GI symptoms under control. But at this point, everyone was making comments about how great my body looked.

I didn’t know how to feel about the message being telegraphed to me, but I did like being complimented. With a blunted desire to eat anything at all, I just kept depriving my body. For a time, I ate about 600 calories a day. I was malnourished; I developed a stress fracture in my foot, simply from walking around campus. I lost my period for several months.

By the time I entered my junior year of college, I had become a wisp of my former self. “You’re withering,” one of my high school friends had said to me at the time. Her words seemed to shatter around me. It was the first time I’d been “called out,” even gently. It was the first time anyone had said a thing about my truly-withering body that would not be construed as positive.

It took me years to say the words “eating disorder.” And often, I thought I was alone, because I’d always heard eating disorders are very rare.

It took me until the end of college to tell just one person — my writing instructor, my pseudo-therapist at the time — that I’d had a problem. It took me years to say the words “eating disorder.” And often, I thought I was alone, because I’d always heard eating disorders are very rare.

At this moment, in my late twenties, I can honestly say I’ve had countless conversations with women about their destructive relationships with food, dieting, exercise, and body image. So, are the statistics accurate? “Thirty million Americans will struggle from an eating disorder at some point in their lives,” Claire Mysko, CEO of NEDA, tells Bustle. “But many millions more have thoughts and feelings about weight, food, and health that are impacting their lives in a negative way.”

EDs can hide in plain sight. When I was consuming very few calories, I did not want to get help. I rationalized, vocally, that my health required me to eat in a restrictive way. (Read: “Back off.”) It took multiple friends and family members acknowledging that my weight loss was concerning to be open to getting help. “Most with anorexia, for instance, come to treatment because someone in their environment pushes them to to go, and says, ‘This is not OK,’" Rhonda Merwin, PhD, an associate professor of psychiatry and behavioral sciences at Duke University, tells Bustle. “So, a lot of cases of anorexia we won’t see [clinically].”

Even when clinicians do see someone with an eating disorder, it cannot always get the proper diagnosis. “The criteria has always been so specific,” Albers-Bowling says. “The diagnostic criteria used to be very weight-based, but that’s no longer the case now. It’s getting more specific.” Mysko says two specifics help diagnosis and treatment. For instance, binge-eating disorder and orthorexia, an obsessive focus on healthy or ‘clean’ eating, are new conditions that clinicians are starting to notice, which would have previously fallen under the umbrella of Eating Disorder Not Otherwise Specified (EDNOS). Experts are starting to acknowledge how often there are co-existing conditions. “There’s often a comorbidity with depression, anxiety or obsessive-compulsive disorder [OCD],” Albers-Bowling says. “Anorexia and orthorexia share that control element, which may have a crossover with OCD.”

I still don’t know exactly what to call the issues I dealt with around the summer of 2012, and a couple years after. But I do know now that I am not alone.

According to Merwin, prevalence is usually determined by meeting the full criteria for an ED, which many do not. “The more recent edition of the DSM [DSM-5] relaxed the criteria for anorexia nervosa, which had previously specified less than 85 percent of ideal body weight and loss of menses,” Merwin says. “The criteria is now ‘restriction of energy intake leading to significantly low body weight and intense fear of gaining weight or becoming fat, or persistent behavior that interferes with weight gain’ and there is no mention of menses.” She cites a 2015 study published in the Journal of Psychiatric Research that found the more relaxed criteria increased prevalence of anorexia by 60 percent.

Mysko says that failing to recognize the suffering is a huge problem she sees at NEDA. “We hear about it all the time,” she says. “There’s this idea that, ‘Well, I’m not sick enough to be treated,’ or that a case doesn’t fit the stereotypical box.”

In reality, early diagnosis for an eating disorder, or even disordered eating that is causing an individual distress and impairing their function in day-to-day life, is crucial for recovery. “Treatment is incredibly important, and as soon as possible,” Albers-Bowling says. “It’s really important to meet with a mental health professional or doctor if you’re struggling, or preferably find someone who specializes in eating disorders.”

There’s also this old idea that eating disorders are near-impossible to treat — research has shown that EDs have the highest mortality rate of any mental illness — but that’s absolutely not the case, Mysko says. “These are treatable disorders,” she says, “but early intervention” is crucial. “At one end, there is this perception that eating disorders are this small number, very extreme scenarios where people get sick and die — and that’s true. But there are also many more people struggling.” Treatment for an ED usually involves both psychiatric and nutritional intervention, with monitoring by a specialist, and can happen in an inpatient or outpatient setting.

If you are struggling with disordered eating or an ED, Mysko says there are a myriad of resources through NEDA, ranging from a screening questionnaire that can help you decide if it’s time to turn to a professional to a guide for navigating insurance coverage for eating disorder treatment.

If you know of a friend or family member who is exhibiting worrisome symptoms, speak up. “Ask questions,” Albers-Bowling says. “Don’t focus on weight. Focus on how they seem to have a different relationship with food, or behaviors. They might even be angry at first, but you’re planting the seed.”

That’s exactly what worked for me. A couple close family member sat me down and told me they were worried about my habits, which were growing increasingly extreme. In that exact moment, I did not respond in any verbal acknowledgment; if anything, I brushed their comments off. But that night, I ate more calories in a meal than I’d eaten in months. I didn’t work out for the next few days either. We never spoke of that moment again, but I quietly sought help from a dietitian to manage my IBS-related issues, and later, therapists for my anxiety.

I still don’t know exactly what to call the issues I dealt with around the summer of 2012, and a couple years after. But I do know now that I am not alone — celebrities like Sophie Turner, Alyson Stoner, and Camila Mendes have shared their disordered eating stories, as well as numerous close friends — and that I was struggling. I fit the new clinical criteria for someone who needs help: 1) food was an obsession causing me distress and anxiety, and 2) my behaviors were impairing simple life functions like eating meals with my family or seeing friends over dinner.

It took me years to believe that I was “sick enough” to have an “eating disorder.” But I was on a dangerous path, and I’m glad I got help as early as I did.

Editor's Note: If you or someone you know has an eating disorder and needs help, call the National Eating Disorders Association helpline at 1-800-931-2237, text 741741, or chat online with a Helpline volunteer here.