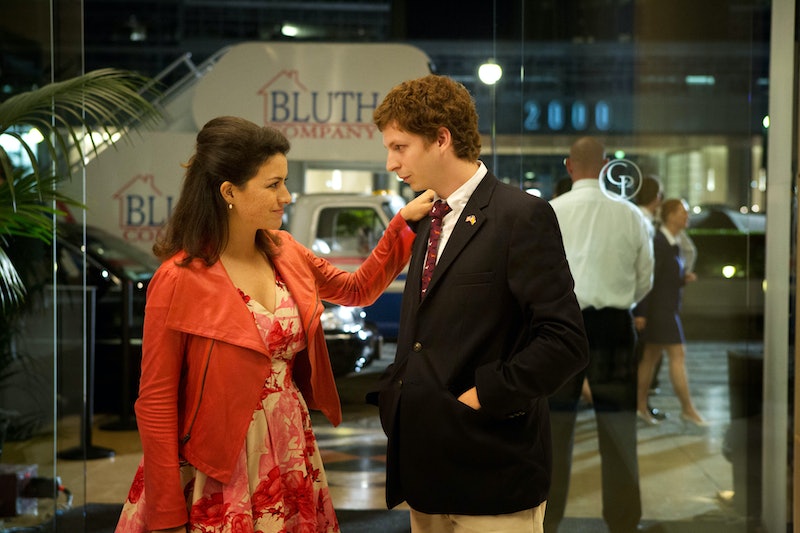 Before the Lannisters of Game Of Thrones stormed onto HBO, the most famous incestual romance on television could be seen on Arrested Development. With Arrested Development Season 5 Part 1 coming to Netflix on May 29, the will they/won't they tension between cousins Maeby Fünke (Alia Shawkat) and George Michael Bluth (Michael Cera) may turn into a full-fledged affair, despite their familial connection. But even hardcore Bluth fans may not remember that the show already established that George Michael and Maeby are not actually related by blood.

In a show that engages comically with taboo subjects such as roofies (or "Forget-me-nows" as GOB calls them), incest is probably the most prevalent. From Buster Bluth's practically Oedipal relationship with Lucille to Lindsay and Maeby's competitive attraction to Steve Holt (who neither of them know is GOB's son), incestual attraction is used frequently as a source of awkward laughs. Yet George Michael and Maeby's relationship is treated almost seriously, in the manner of a more traditional will-they-won't-they. In the first episode of the series, George Michael and Maeby were forced to confront some feelings for each other that strain the boundaries of good taste when Maeby planted a kiss on George Michael to "teach [their] parents a lesson" about them not being closer. However, it's revealed in the final episode of the show's original network run that Maeby and George Michael may be related — but that doesn't mean that they're cousins.

As the show goes on and George Michael continues to have feelings for Maeby, he begins to suspect that she could be adopted. After all, it seems like her parents feel disconnected to her, and it's unlikely that Tobias and Lindsay had sex all that often, even when they were first married. Finally, her father Tobias shows George Michael and Maeby some graphic images that prove, without a doubt, that Maeby is the daughter of Lindsay and himself. However, it's then revealed that while Maeby wasn't adopted into the Bluth family, Lindsay was — meaning that Maeby isn't blood-related to George Michael.

However, that reality doesn't make their romance any less unsettling. Sure, they're not actually cousins, but it's safe to say that these two are emotionally bonded in a way that mimics a familial relationship. Michael says as much to George Michael in the Season 3 finale, when he explains that George Michael and Maeby are still family — and as Michael has said time and time again, family is the most important thing.

While Season 3 ended with George Michael realizing that he should leave his feelings for Maeby in the past, Arrested Development isn't the type of show that would leave such fertile ground for comedy for good. After spending Season 4 trying to use his tutorship abilities to impress his conniving cousin, George Michael — now going by the name George Maharis — seemed to get over Maeby by pursuing a relationship with the actress Rebel Alley (Isla Fisher), who also happens to be dating his father.

With George "Maharis" Michael busy in a new relationship and Maeby trying to avoid being criminalized for accidentally sleeping with a 17-year-old, who was pretending to be a cop who was pretending to be a 17-year-old, these two dangerous cousins may finally be over each other. However, if there is one lesson to be learned from Arrested Development, it's that people never really change. Lucille will always be a cruel mother, Lindsay will always be shallow, and Michael will always try and save the family.

Chances are, these two will end up right back where they started in Season 5 of Arrested Development, leaving morals by the wayside for the chance to find romance with the only other person who could possibly understand what growing up in the Bluth family is like.

More like this
Martin Hancock’s Wife Played A Key Part In His Return To 'Coronation Street'
By Catharina Cheung
Here's Why You'll See Less Of Olivia Rodrigo In 'HSMTMTS' Season 3
By Bustle Editors
Everything To Know About The Flash Season 9
By Brad Witter
Who Is 'Stranger Things 4' Fan-Favorite Joseph Quinn Dating IRL?
By Grace Wehniainen
Get Even More From Bustle — Sign Up For The Newsletter