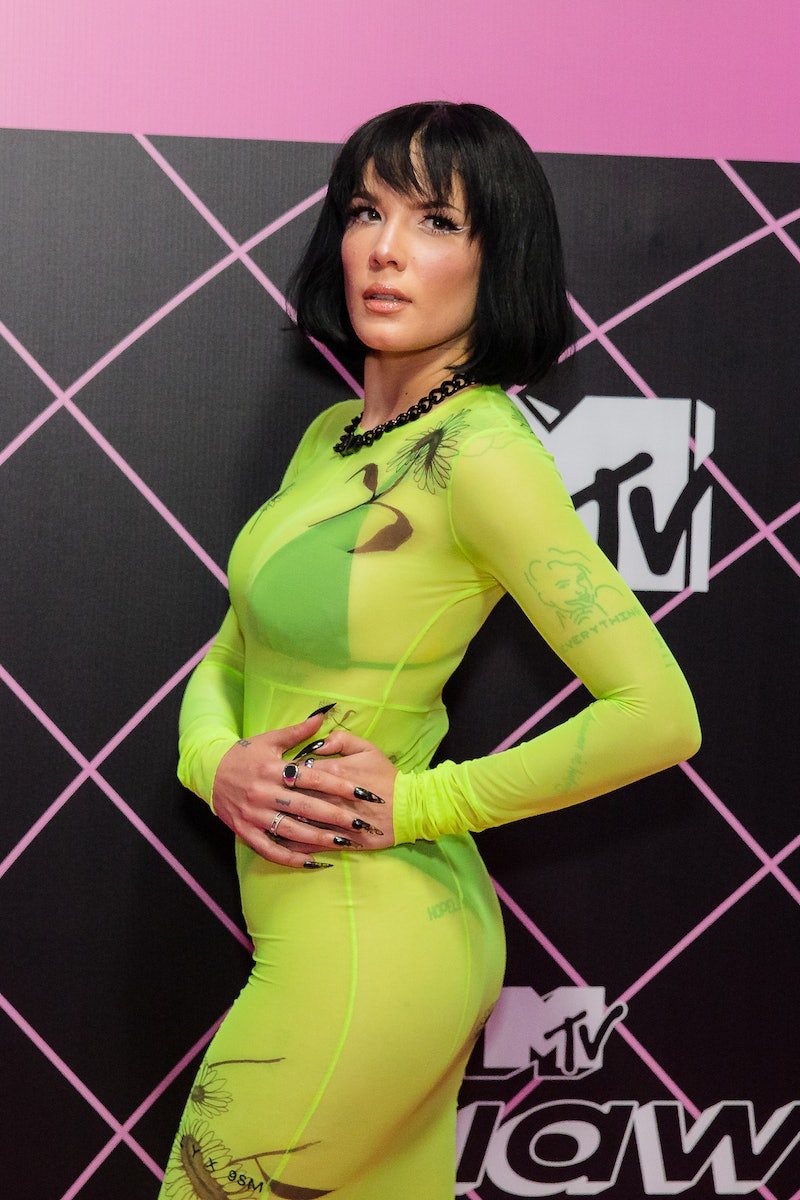 Another day, another celebrity hair change. Be honest, though. No matter how many times a star switch up their 'do, you still need to see it. Now, Halsey's rainbow bangs are the latest addition to celebrity hair switcharoo, and the look is so good that'll it will inspire your next bold look.

On Wednesday night, Halsey took to her Instagram account to show off her new hairstyle, and the change was both dramatic and subtle. How? Well, as far as the drama, her bangs are straight up rainbow-hued. The wispy fringe falls just above her brows and goes in a ROYGBIV gradient across her forehead. The look is bold, bright, and basically everything you could want in a fun summer look. While the new rainbow bangs could be related to Pride, Halsey's caption full of summer fruits and waves seem to suggest that it's a summer look (or both maybe).

How are rainbow bangs subtle, though? That's where the rest of the look comes in. Halsey basically changed nothing about her hair except for that one little section. While, yes, there's a lot of color happening along her bangs, as far as the cut and style, that remained the exact same.

The real question, though, is whether or not Halsey's rainbow bangs are real.

Based on the two photos that the singer posted to Instagram, these bangs definitely don't look fake. Plus, the length and cut of the fringe appears identical to the style she's been rocking lately. Also, the color itself looks authentic as it's not as vibrant or bright as a clip-in piece a la Selena Gomez's rainbow bangs. So, yes, it certainly seems like Halsey did, in fact, dye her bangs rainbow.

Seeing the singer with a new hair look, though, probably won't come as a surprise to her fans. Halsey has been rocking black hair for a while now, but she's kind of known for switching things up. Just recently, over the Fourth of July, the singer donned a wig on both Instagram and during a performance.

Back in April, Halsey debuted the jet black hair that she's been wearing for months. While she's still got the same dark tone through the length of her hair (rainbow bangs aside), before she decided to go dark, she was crushing some seriously gorgeous cotton candy pink.

While Halsey has colored her natural hair, she's also no stranger to using a wig to switch things up. At the Vanity Fair Oscar party back in February, the singer had some seriously Rihanna-esque fiery red hair. How do fans know it was a wig? The singer had just performed at the Victoria's Secret fashion show in Nov. 2018 with a cute pixie cut. Unless she's got a super power, the shoulder length cut and vibrant red was most definitely a wig.

While seeing Halsey switch up her color may not be an abnormal occurrence, it's still exciting to see how the artist chooses to expression herself through her 'do. From bold red to black to rainbow bangs, Halsey's hair is definitely a chameleon, and it's always exciting to watch it change color.