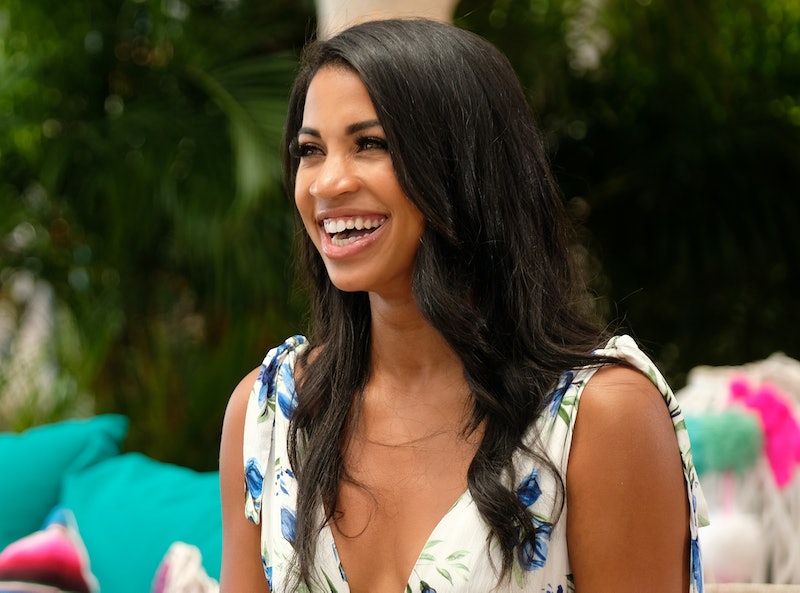 Out of the four couples going into the overnight dates during the Bachelor in Paradise Season 6 finale, Katie and Chris appear to be in the most danger of breaking up. Yet, Katie and Chris might still be together after Paradise if their interactions on social media are to be believed. Chris nearly ended things with Katie ahead of the Fantasy Suite dates, but she helped him keep their relationship alive. It wasn't the most perfect way to enter the final date in Paradise and it looks like they might not be super solid at the reunion special either. Yet, there's hope that Katie and this Bachelor elder are currently together following their time on Paradise.

The impending pressure of the Fantasy Suite dates and proposals had Chris reeling during Week 6. While he seemed ready to let Katie go, he changed his mind after Katie shared how she wants to be with him and encouraged him to follow his gut. This conversation was a great glimpse of how this couple could work outside of The Bachelor franchise since Katie helped Chris work out his feelings without pressuring him. Yet, while Katie has consistently displayed how confident she is in their relationship, Chris' waffling has taken its toll on Katie according to a preview of the aftershow special.

As Entertainment Weekly pointed out, it sure looks like Katie and Chris will get engaged in Paradise. But at the reunion show, Katie arrives sans engagement ring. While in the hot seat with Chris Harrison, she shared that she knew she loved Chris the whole time on Paradise, but that Chris wouldn't show her that he loved her too. It's not clear if Katie and Chris have broken up at this point. But Katie claimed she's experiencing a "darkness" in her life that she hates, so that's definitely not a good sign for their relationship. Harrison promises to mediate a conversation between the two of them, but fans won't know the outcome of that until the reunion show.

Still, all it takes is a little digging into their Twitter and Instagram accounts to find hints that these two are still together despite all the ups and downs. Particularly on Instagram, Chris makes a habit of commenting on nearly all of Katie's posts and they are more than just friendly in nature. Many times, Chris will utilize the fire emoji twice in the comments, like in this post from Sept. 14 of Katie eating lunch in New York City. He called her "hawt" in another post about her (their?) New York trip. Perhaps most telling is how in a post from Sept. 5 where Katie thanked her followers and wrote, "We are all in this together now. soo, buckle up," Chris commented, "Strapped in." So, yes, it seems he's along for the ride when it comes to Katie — and that's probably romantically.

Chris doesn't post as much on his Instagram account and neither of them has shared any photos of each other. So the really good stuff goes down in Katie's comments. Another instance was from Sept. 15 when Katie wrote she watched a "romantic movie" with a friend. Chris asked if it was P.S. I Love You and Katie teased the Gerard Butler lookalike for wanting people to mistake Butler for him. Chris replied that it's "one of the best movies to quote" and inserted a Butler quote from the movie. "We are gonna last because I still wake up every morning and the first thing I want to do is see your face," Chris wrote — and while it's not quite a direct quote from the film, the sentiment sure can be interpreted to be about Katie. And if swoon-worthy Gerard Butler quotes can be trusted, maybe these two will last after all!

There are many other instances of Chris implying that these two are still together on social media. Back in August, Chris tweeted a message of support to Katie. Chris wrote, "You'll be alright" during the episode where Katie rejected Wills — and then told Chris she likes him. As fans noted in replies, it was hard not to think this was him admitting they were together. But that was all the way back on Aug. 12. So a more recent tweet that best shows off what their current status may be is when Chris replied to Chase after their Fantasy Suite convo aired. Chase said that Katie is "exactly the kind of girl" Chris needs. Chris replied, "You sir are correct."

Katie has been less transparent than Chris on social media. But she has been engaging with him on Twitter and she often replies to his comments on Instagram. That's probably not the behavior of an ex-fiancée, so to riff on the immortal words of Gerard Butler in P.S. I Love You, these two just might last.

More like this
All The Clues Zach & Christina Are Together After 'The Bachelor'
By Grace Wehniainen
Nicole & Chris Hinted They’re Still Together After 'Married At First Sight'
By Brad Witter
Tahzjuan Took A Cruise With These Bachelor Nation Alums After Visiting Zach's Season
By Kayla Blanton and Grace Wehniainen
This 'Bachelor' Contestant Already Has A Lot In Common With Zach
By Grace Wehniainen
Get Even More From Bustle — Sign Up For The Newsletter
From hair trends to relationship advice, our daily newsletter has everything you need to sound like a person who’s on TikTok, even if you aren’t.