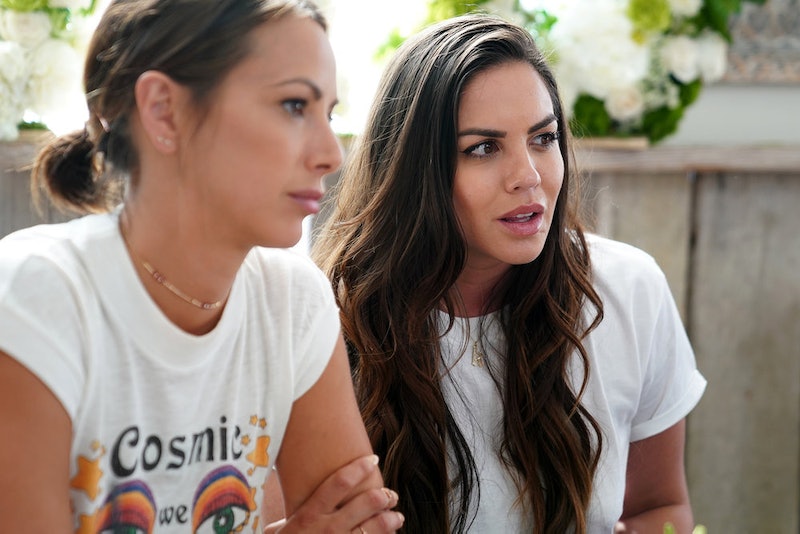 It wouldn't be Vanderpump Rules if two so-called friends weren't fighting. And this time, the feud is between some of the show's biggest pot-stirrers (which admittedly isn't saying a lot for this cast). Nonetheless, we must ask the inevitable: are Katie and Kristen still friends? They seem to be hitting another rough patch in a promo for Vanderpump Rules' next episode.

First of all, the two are technically in business together, along with Stassi, for their Witches of Weho wine endeavor. And they're also still co-stars, so obviously they're still in some kind of contact. As for their non-professional connection? That's a little murkier.

Katie and Kristen are having serious problems, according to next week's promo, because they can't get along with each other's significant others. Katie has issues with Carter because she doesn't like how he treats Kristen, and Kristen has issues with Schwartz for pretty much the same reason — that he's treated Katie poorly in the past. Essentially, it seems like Katie thinks Kristen deserves better, but Kristen feels like it's a case of the pot calling the kettle black.

It's unclear how or if they'll resolve this argument, and unfortunately, there's not a lot more insight to be gleaned from social media. Katie and Kristen are in a few group photos together on Instagram — some taken to promote the show, others for their wine brand. The latest photo of just the two of them is from January, in which Kristen wished Katie a happy birthday. That's a couple months ago, so things might have changed since then, but they were apparently on good enough terms at the time for Kristen to call Katie her "best friend" and "sister."

The tension between Carter, Katie, and Stassi doesn't seem like it's going away anytime soon, but as we've seen time and time again on this show, it doesn't take too long for everyone to bounce back from even the nastiest fights and become friends again. Take, for example, the fact that Stassi and Jax once couldn't even be in the same room together after he cheated on her in Vegas, the prolonged period after their breakup in which Kristen and Tom Sandoval were at each other's throats every chance they got, or when Katie and Lala couldn't stand each other and engaged in some pretty harsh name-calling. They all got over it.

The point is that there are very few feuds and grudges within Vanderpump Rules that go unresolved. Truly, these people have done some of the worst things anyone can do to another human being, and somehow they remain one big dysfunctional family. Secondary players have been tossed aside in favor of greener pastures, sure — but the core cast, especially those like Katie and Kristen who have been around since the show's inception, always find a way to make things work with one another sooner or later.

Even if Katie and Kristen are on the rocks right now, it seems really unlikely that this conflict regarding Carter will be the thing that undoes them for good. This cast has come out on top of far more severe conflicts in the past, and this will probably just be another one for the books.