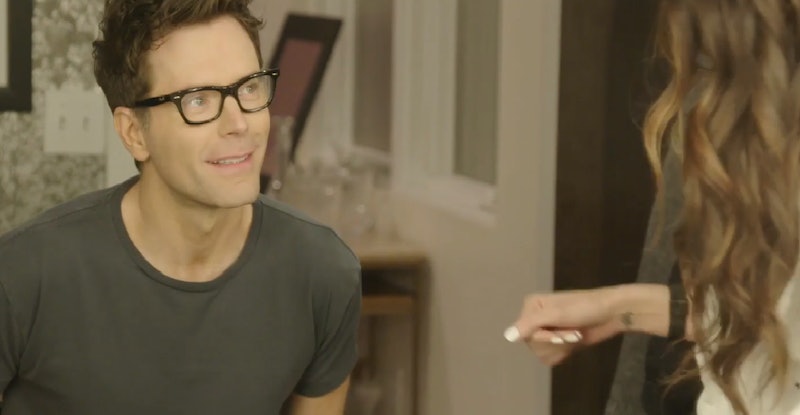 Fun fact: Kristin Cavallari's best friend Kelly Henderson once dated Bobby Bones, musician, American Idol mentor, and recent winner of Dancing With The Stars. Kelly's dating life has been a hot topic of discussion on Season 2 of Very Cavallari, and during the April 14 episode, it was brought up again when Bobby appeared on the show as one of Kelly's clients — not her boyfriend. But, it's worth mentioning that he brought their undeniable chemistry with him.

Kelly is a renowned celebrity grooming specialist, meaning she does styling and grooming for many of Nashville's top male artists and public personalities. And when she brought Bobby on as a client, she swore that she would never date him again. "We have a really good working relationship," she said on the show. "And I don't date my clients."

Over the last few episodes, Kelly has talked about the pressure she feels to find the love of her life because she has "a clock ticking biologically." She has even considered freezing her eggs to ensure she can have children in the future. So, one of her friends set her up on a blind date, and although it went fine, he wasn't the one. The day after the date, she had a meeting with Bobby for his book's cover shoot.

"We were kind of loosely dating and we have this amazing chemistry and amazing connection, and we still do," she said of Bobby. But once they started working together, she called it off. Judging by the way they still interact, though, they totally seem to have a thing for each other.

"So how are things with dudes?" Bobby asked her while she applied foundation to his skin. She laughed it off. "Oh, you know," she said. She told him about the blind date and didn't really go too deep into it, admitting it was awkward to talk about with him. "Ultimately, I think he just wants me to be happy and find a good guy," she said. "But he might be a little jealous." Considering he jokingly asked her if she would ever consider dating him again, he seems to care more than just a little.

"There's a reason we're in our mid-30s and we don't have anyone," Bobby said, giving her a total look of longing. "We just have to look at our history. We've had many, many relationships that haven't worked. So we can plan on many more." He dropped his head with a defeated smirk. It sounds like if Kelly doesn't want to be with him, he doesn't want her to be with anyone at all.

Later, Kelly went to hang out at Kristin's house, and Kristin asked her if she'd ever date Bobby again. "Are guys still kind of flirty?" she asked. Kelly hesitated to answer and smiled. She said that they definitely have chemistry and that "it's always gonna be there," but that it ends with their working relationship. "We really try to keep the boundaries clear," she said. "No more dating, that's not happening again, and we're just friends now."

It's almost as if Bobby's heart could be heard shattering in the background when Kelly said that. It's totally obvious that he still wants to give their romance a shot. But does Kelly? For now, she's focused on work. But who knows, she could still change her mind.

More like this
Twitter Is Very Torn About The Winner Of 'Dancing With The Stars' Season 31
By Jake Viswanath
Why Wasn't Teddi At The 'Bachelor In Paradise' Reunion?
By Brad Witter
Twitter Is Saying The Same Thing About Jill Scott Winning 'I’m A Celeb'
By Sophie McEvoy
Meet Jungle Runner-Up Owen Warner's Equally Handsome Brothers
By Sam Ramsden
Get Even More From Bustle — Sign Up For The Newsletter