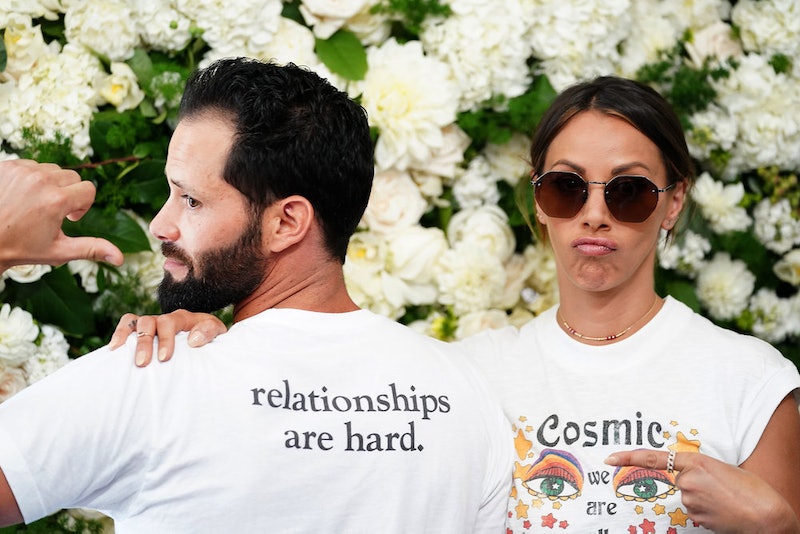 Like most couples on Vanderpump Rules, Kristen and Carter have seen their fair share of ups and downs. But between constant bickering and that big blowout with Stassi and Katie, it's kind of unclear how much longer they can go on like this. So are Kristen and Carter still together in 2019?

Things have been a little up in the air. Carter posted a photo of Kristen less than a month ago on his Instagram page, but she hasn't posted about him since January. And in an episode of Watch What Happens Live With Andy Cohen that aired the same day as Carter shared the photo, Kristen was asked by a viewer what the couple's relationship status was. Her answer was pretty cryptic:

"You know what? Honestly, I bleed out for the show. Like, I show every single second of everything. And so for this, I'm just going have to say, like … we're figuring it out. It's... especially if you want to talk about what's happening today, like, the show airing and what's been going on in our relationship for the past year or more, like, we're figuring it out. So we'll let you all know when we get to that place."

And in a tweet following the episode in which Stassi raises serious concerns about Kristen and Carter, Kristen posted a tweet seemingly defending both her friend and her boyfriend. "Tonight's episode was heavy. I want to reiterate that @stassi was only repeating what I had told her," Kristen wrote. "I love her & all of my girls for wanting the best for me. Carter is a really wonderful man and people go through things. Please just be kind because man, we're all human."

That seems to be basically all they've said offscreen about their relationship in recent months, but some of their co-stars have weighed in. In an interview on The Daily Dish podcast, Tom Sandoval said he's a fan of his ex's boyfriend. "I think Carter is awesome. He's a really cool guy," Tom said. "I like them together. I think they are great together and I wish nothing but the best for them."

These two have been together for a while now, so hopefully they figure out a way to either settle their issues or amicably split up and move on.

Kristen doesn't exactly have a history of healthy relationships. Before she and Sandoval called it quits once and for all, they were basically making each other's lives miserable, and she wasn't able to let go of their relationship for a long time. And during her fling with James, they also treated each other pretty terribly, and she even became physical with him.

It wouldn't be reality TV if people who supposedly love each other weren't in the throes of some explosive drama, so we can probably expect more to come before anything conclusive happens with Kristen and Carter. Keep one eye on social media and the other on Pump Rules, and maybe soon we'll get some closure on what exactly is happening with these two.