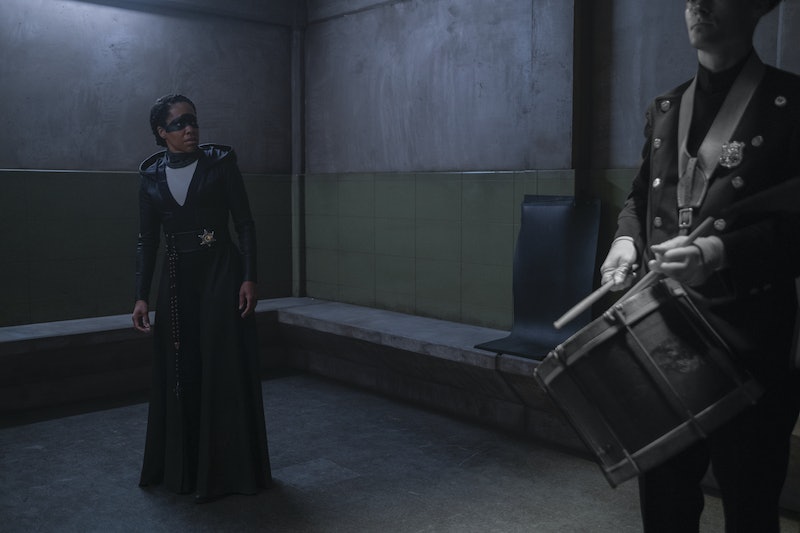 Spoilers for Watchmen Episode 6. This week, HBO's Watchmen dove deep into Will Reeves' memories with Angela Abar, and what resulted was a heartbreaking and infuriating tale of how racism in America forced Will to become Hooded Justice. Angela's realization that her grandfather is the founding Minuteman wouldn't have been possible without a bottle of Nostalgia pills, left in Angela's destroyed car by Will and Lady Trieu. But what are Nostalgia pills in Watchmen? How does it even work?

Thanks to a Nostalgia ad in Peteypedia, we know exactly what it is. Created by Trieu Industries, it's a psychoactive compound composed of "synthetic mnemonic material" replicated from the patient's brain. Tablets are created by scanning the hippocampus, and each tablet contains one to five selected memories.

Color coding signifies the grades of emotional experience, with red being the most intense. (All of the pills Angela took were red, and for good reason — all of Will's experiences are harrowing.) It was created for people suffering from anxiety, dementia, or psychic trauma from Adrian Veidt's squid blast, and predictably it comes with a host of warnings: don't take while pregnant, or while swimming, eating, standing over a cliff, operating machinery, or having sex.

Most importantly though is the bold warning on the label: Never take someone else's Nostalgia. The ad warns that doing this can cause temporal disorientation, emotional triggering, paranoia, hallucinations, and altered consciousness — all things Angela experiences as she fades in and out of being Will himself. Worse, Angela took all the pills at once, and so she phases continuously between memories, with some of them overlapping to create a surreal, disorienting experience about how racism has shaped Will's entire life.

Watchmen showrunner Damon Lindelof explained to Collider that the Nostalgia pills are a "major MacGuffin" in Episode 4, but they embody the central themes of "not just this season of Watchmen, but of Watchmen writ large" by Episode 6.

"I think nostalgia is dangerous," he explained. "This idea of, 'Let’s travel back to the past,' particularly when you look at that idea through the construct of race and racial inequality in our country, that is bad."

In this way, Nostalgia functions as a more obvious and tangible storytelling tool than in the comics, where it stands as a perfume line by Adrian Veidt. The smell of Nostalgia is meant to elicit a longing for a rosy past that never really existed, and the perfume's presence often signals when a flashback is about to occur. Similar to the film Midnight in Paris, Lindelof told Collider that Veidt's Nostalgia is about how "every generation feels like the generation before theirs was the generation they wanted to live in."

In the comics, Nostalgia appears on posters in the background, or as a perfume bottle in Silk Spectre's purse. It features most prominently in the final chapters, when Dr. Manhattan teleports Silk Spectre to Mars and her bottle of Nostalgia falls out and shatters. (This raises an important, non-plot-based question: Do men think women carry entire bottles of perfume in their purse?) This triggers a series of memories where Silk Spectre finally realizes that her real father is The Comedian, a vigilante who sexually assaulted her mother but later had a consensual encounter with her. This shocking turn of events as a result of Silk Spectre remembering the past is what Dr. Manhattan calls a "thermodynamic miracle," and it convinces him to teleport them back to Earth to stop Veidt from unleashing his engineered squid. They fail of course, but the idea that one needs to look to the past to move forward is a theme that reverberates into the Watchmen show today.

By the last chapter of Watchmen, Veidt has switched out his Nostalgia line for a scent called Millennium, signifying how he wants everyone to move forward and forget what happened (and the tragedy he created). For Veidt, progress happens by ignoring the trauma of yesterday and paving over it to create a brighter tomorrow.

Trieu's Nostalgia, in effect, shatters everything Veidt's Nostalgia stood for. We see through Will's eyes that the past wasn't greater, or kinder, or more idealistic.

Will and Lady Trieu's plans for the Millennium Clock seem to be the opposite of Veidt's. As two people who suffered from America's racist policies — Will's entire life and Lady Trieu losing her village during the Vietnam War — their belief is likely that you cannot move forward by erasing the past. In fact, you have to face it directly and reckon with its ugliness, or else the new millennium that Veidt engineered will continue to rot from the inside out. It's no surprise that there are fan theories that the Millennium Clock is a time machine meant to either change the past or force Americans to at least face what their country has done and how its poisoned society today.

Trieu's Nostalgia, in effect, shatters everything Veidt's Nostalgia stood for. We see through Will's eyes that the past wasn't greater, or kinder, or more idealistic. It was a violent, oppressive time for many people, particularly Black Americans, and if Will and Lady Trieu — and now Angela? — have their way, everyone determined to ignore or erase America's ugly past will know it too.