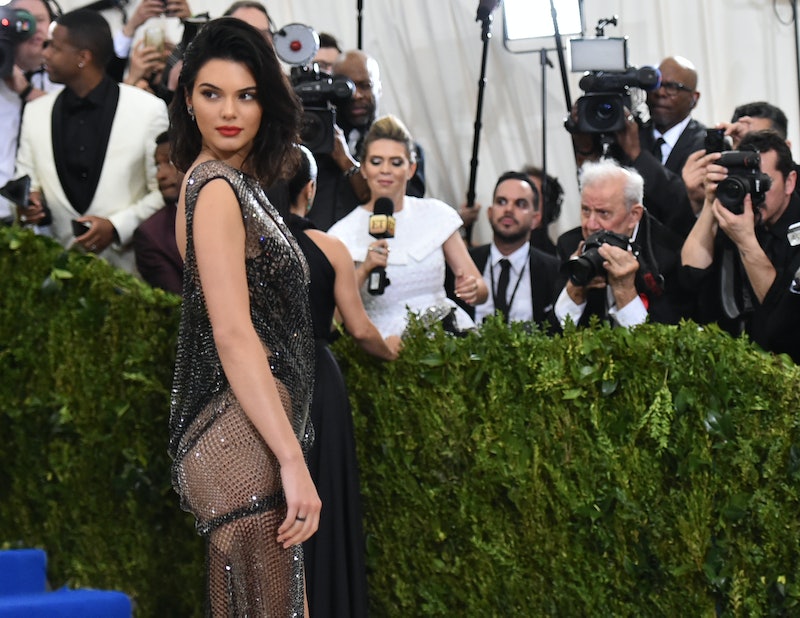 The Met Gala is not your average awards show. There are more over-the-top outfits, a higher price of admission, and stricter rules to follow. One of the most famous is the "no selfie" policy put in place by Anna Wintour in 2015. If you're wondering if there will be a cellphone ban at the Met Gala this year, the answer isn't so clear. Because, you know, celebrities don't like to follow the rules.

There's a reason that no one knows what really happens at the Met Gala — no cell phones are allowed. Cameras will not be inside and that includes the ones on phones.

Three years ago, Page Six reported that everyone that got invited to the event got notices that read, “The use of phones for photography and social media will not be permitted inside the gala.” The ruling was passed down by Anna Wintour, who made it clear that no selfies would be allowed at the event.

The same year, Kylie Jenner and bunch of her friends got together in the bathroom to break the rule. Jenner's latest Met Gala selfie reads "annual bathroom selfie," making it clear that the social media star does not plan on stopping anytime soon.

In short: Yes, there is a ban on phones at the Met Gala. No, celebrities don't care.

The idea of the Met Gala phone ban is likely to keep the event exclusive. Unlike other awards show, the night is not televised. After the celebrities walk the red carpet, the E! News coverage stops and the event is closed to the public. According to Forbes, a single ticket costs $30,000 and a table rings in at $275,000. If it were publicized, it wouldn't be worth so much.

So what exactly happens at the Met Gala? Well, according to previous Bustle coverage, there's dinner, performances, and A-lister meet-ups.

"The 'behind the scenes' is always really fun at the Met," Christine, a former Vogue staffer, told Bustle. "A tremendous amount of work goes into the production and execution of the event and the night always seemed to go smoothly, impressive, to say the least. The decor is mouth dropping, the high energy is palpable and the performances always have every guest up from their tables and dancing!"

There are some other rules to the event as well. According to WWD, after all of the photos of designers and celebrities smoking in the bathroom, the New York City Department of Health decided to crack down. This year there will be people from the department making sure that it is a smoke-free zone, according to the publication.

“This spectacular event awes us all,” said Department of Health Commissioner Dr. Mary T. Bassett in a letter to the museum’s senior vice president, according to WWD. “We were dismayed to read reports that some celebrities chose smoking as their fashion accessory and flagrantly violated New York City’s smoking laws.”

Wintour has also banned some foods from the Met Gala as well. Yes, really. According to the Daily Mail, Wintour banned garlic, bruschetta, and parsley from the 2016 event. The editor apparently wanted to make sure that no one had bad breath and kept their dresses clean. She also made it a rule that you cannot sit next to the same person twice at the event.

Of course, the more rules at an event just means that there's more chances for celebrities to break them. There's no word on who will attend the event this year, but there's a good chance that Jenner will be there to capture her annual selfie — ban or no ban.