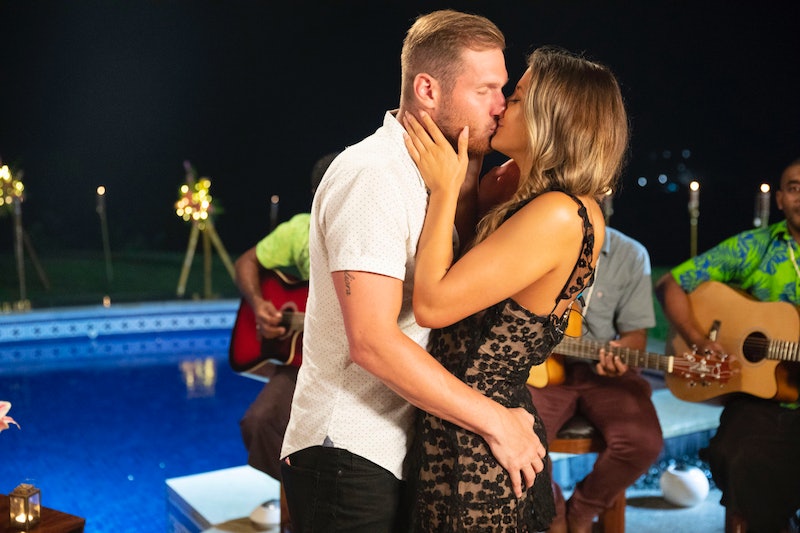 Weston may have dated around during the first few weeks of Love Island, but he ended the season pretty happily and confidently with Emily. They came in fourth place (aka last) during the Season 1 finale, but fans will be happy to know they weren't just in it for the money. Yes, Weston and Emily are still together after Love Island, and according to social media, they're already racking up the airline miles to make their long-distance relationship work.

As he mentioned more than a few times on the show, Weston is from Texas and lives in Dallas. Meanwhile, Emily lives in Groton, New York, where she attends Binghamton University. The two haven't been away from the villa in Fiji for that long, so they're still adjusting to life back in the real world, and that means figuring out how to keep the romance going from a couple hundred miles away. Of course, that involves a lot of talking. Emily shared on her Instagram Story that Weston FaceTimed her at 5 a.m. "to eat in my face" alongside a screengrab of him chowing down on some food. But because relationships cannot live on FaceTime alone, they already have big travel plans, as Weston indicated on his story in response to Emily's post.

Though Weston's Instagram shows he's been doing a lot of hanging back home in Dallas, he posted on Aug. 11 that he'd be traveling to New York on Aug. 12 to see Emily. Her town of Groton is more than 200 miles from Manhattan, but as Emily explained on her Instagram story, she's flying to meet up with Weston in New York City.

As a photographer and videographer, Weston travels a lot for work. His Instagram is filled with photos from adventures in Colorado, New Mexico, Oklahoma, Arizona, Costa Rica, and Indonesia, along with his home in the Lone Star State. He shared in a recent post, "TRAVELING is something I love to do!" So it doesn't seem like he'll mind at all that he needs to travel to see Emily.

Emily is still in college and then has plans to go to law school. But when she's not in school, she also takes a lot of trips. Her Instagram includes pictures of her in Hawaii, Miami, Israel, Mexico, and the Dominican Republic. So whether Weston comes to her side of the country or they meet up somewhere a bit more tropical, they have some options. After all, Weston posted a few days after the finale asking for travel suggestions. "TIME TO ADVENTURE! Where should the @loveislandusa cast travel! Drop your favorite travel spots and restaurants," he wrote. "I want to take @emilysalch97 on vacation help us pick a spot."

Weston and Emily will most likely keep Love Island fans updated on their New York City reunion on their social media. After that, you'll want to keep an eye out for any other vacays they have planned. They clearly share a common passion, and all that traveling together may be what keeps their relationship going.