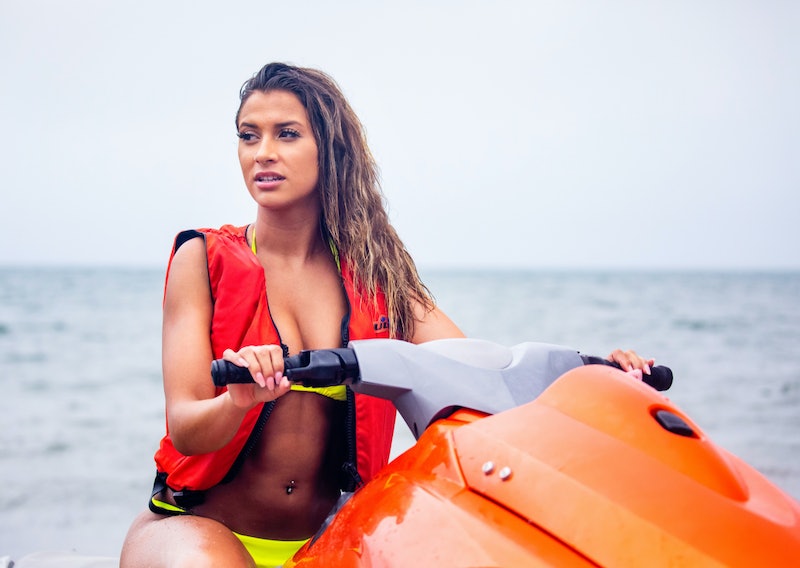 Now that we know she'll be sticking around for a little while longer, Love Island star Emily's Instagram is a good place to learn more about what she's like outside of the show. Her account only has 107 posts, but it seems to line up pretty well with the person we've seen onscreen. She comes across as just as fun-loving online as she has been in the villa.

Although the Love Island contestants aren't allowed to have their phones, as Emily revealed on Twitter, her social media accounts are being updated by a friend while she's away in Fiji. Her latest Instagram post encourages viewers to vote for her and Weston as the favorite couple, and most her recent pics and Instagram stories are about the show. But you don't have to go back too far (only five photos, to be exact) to see the kind of content that Emily usually shares — and it's pretty obvious why she was chosen to join Love Island.

Though the below photo shows Emily hanging by a waterfall in a jungle, she clearly loves the beach. According to her Instagram, she was recently in Hawaii, but she has also hung out on beaches in the Dominican Republic, Israel, and Mexico. Multiple posts show she doesn't mind being poolside either, so really, heading to a Fiji villa is just a regular day for her.

Further highlighting how perfect Emily is for Love Island is the below picture of her posing with a neon sign — a signature design feature of the Love Island villa.

Based on one of her Instagram posts from January, it looks like Emily was recruited to be on Love Island. She shared a saucy picture of her with an open pajama shirt drinking champagne with the caption, "Can't drink all day if you don't start in the morning." The account for Lazy & Wasted Clothing Co. commented asking her to DM them "asap" regarding CBS, since the company claims on Instagram to have been casting for Love Island.

Regardless of how she ended up on the show, though, there's no denying that Emily has been a game-changing contestant — it's something she pretty much predicted herself. In a video announcing that she'd be on Love Island that Emily posted to Twitter, she said, "You know if I'm going in, some sh*t is about to go down." And boy has it. Beyond Kelsey choosing to leave after Emily hit it off with Weston, the New York native also piqued the interest of Eric and Kyra. Eric has since been sent home, but it's still possible something will happen with Kyra, even though they're both currently coupled with other people.

Whatever happens on Love Island, Emily's Instagram shows that she's up for anything that comes her way. Because as her Love Island bio reads, "Emily is crazy, fun, spontaneous, and loves adventure!" And both her Instagram and time on Love Island so far prove just how true that is.