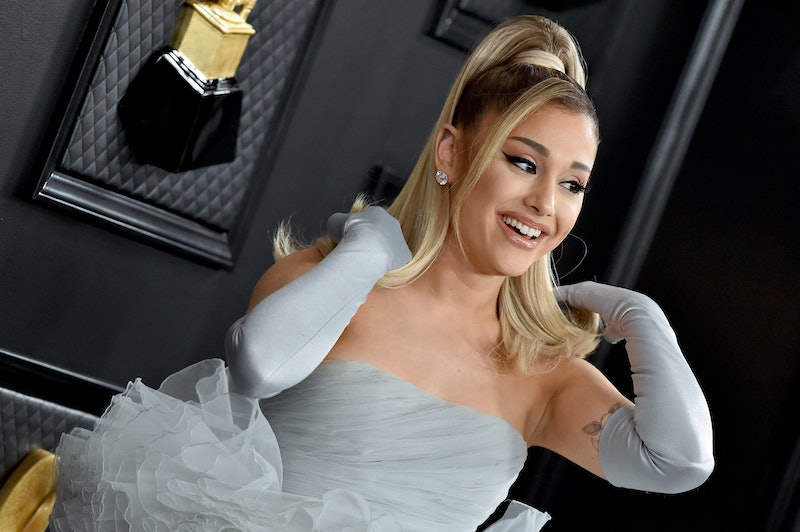 Ariana Grande isn't about to let social distancing get in the way of reuniting with all of her former Nickelodeon costars. On Friday, March 27, Ariana Grande celebrated Victorious' 10th anniversary with a virtual reunion for her fellow cast members, and the pop star shared several goofy photos from the event on her social media accounts. "Happy," Grande captioned a screenshot of the group's Zoom meeting on her Twitter and Instagram accounts.

The "Thank U, Next" singer reminisced about the classic Nickelodeon sitcom — which ran from 2010 until 2013 — with creator Dan Schneider and her Victorious cast mates, including Victoria Justice, Liz Gillies, Matt Bennett, Leon Thomas III, and Daniella Monet. In the photos she shared on social media, Grande can be seen making a heart with her hands, while Gillies and Bennett hold a glass and a guitar over their heads, respectively.

Earlier in the day, Grande shared several throwback photos and videos from her time on the show, on which she played the ditsy but talented Cat Valentine. "I’m sorry for the mushiness but.... [I] jus want to say how grateful I will always be for being on this show and for those years of my life," the singer wrote on Instagram, along with a slideshow of behind-the-scenes photos from her time on Victorious. "I couldn’t have spent my teenage years with a better, more funny, talented group of human beings."

She continued, "I miss getting in trouble w my friends the school room and trying not to laugh when we weren’t supposed to on set. i even miss waking up with red hair dye stained pillows." Grande then thanked Schneider for casting her on the show, as well as "my cast mates for some of the most special years of my life. ... Happy Anniversary!"

In her tribute post Grande also acknowledged the connection she will always have with her character, who she also played on the short-lived series Sam & Cat opposite Jennette McCurdy. "I really loved playing Cat Valentine," the singer wrote, "even though sometimes people think i actually still speak and act like that and her essence will lovingly haunt me til I die."

Despite revealing in her July 2019 Vogue interview that she only auditioned for Victorious to further her dreams of becoming a pop star, Grande has stayed connected to her former costars, even casting Bennett and Gillies in her iconic "Thank U, Next" music video. (Bennett also played Grande's love interest in the "One Last Time" video.) In November, she invited them both to perform with her on the Sweetener World Tour, where Grande recreated a scene from Victorious by singing "Give It Up" with Gillies.

The 10th anniversary of Victorious was also a special day for Grande for another reason: it's also her dog, Coco's 10th birthday. "Happy tenth birthday my sweet coco bear," the singer wrote on Instagram, alongside a black-and-white photo of herself cuddling with the puppy. Between her beloved dog's big day and a remote reunion with all of her Victorious cast members, it's no wonder that March 27 was such a "happy" day for Grande.