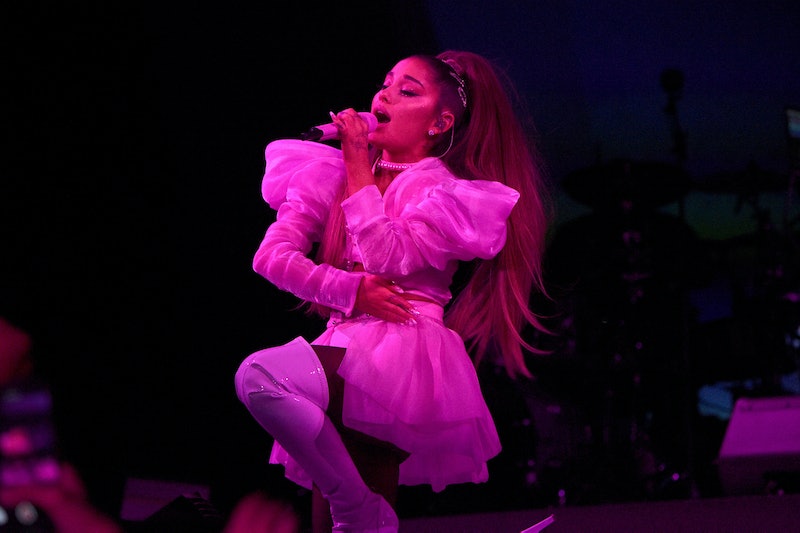 It's official: Ariana Grande is now an 11-time Grammy nominee. On Nov. 20, the 62nd Annual Grammy Award nominations were announced with Grande picking up five nominations for her latest album, Thank U, Next. Now, Grande's celebrating her 2020 Grammy nominations on Instagram and Twitter with a sweet tribute to her friends — and a very special request.

It started with Grande tweeting "oh wow, oh wow" before she was "crying. moved and honored" by what had just happened. Once it all set in, Grande asked her co-writer Victoria Monet, producer Tommy Brown, and her "Boyfriend" duet partners Social House to "pls come hold me (and grab the cliquot)."

A few hours later, though, Grande wrote a more proper thank you aimed at the Recording Academy. "Thank u for acknowledging this music my beautiful best friends and i created in just a few weeks together," she wrote on Twitter and later Instagram. "The acknowledgement is truly more than enough on its own for me and my heart. thank u."

Obviously, it's an honor just to be nominated, but winning alongside all of your friends would be even better. And that might explain why Grande decided to shoot her shot and ask the Grammys for a favor.

"pls allow me to bring literally all of my friends who worked on it to sit around me so they can make sure my heart is still beating lmao," she wrote, tagging of few of her collaborators including "Fake Smile" songwriter Justin Tranter and "7 Rings" songwriter Tayla Parx.

So, what do you say, Recording Academy, can Grande get 14 tickets to the show? It's basically a matter of life or death. Think of Grande's heart! "Be sure to have an ambulance and some cliquot on standby," Grande wrote in a now deleted tweet responding to the Recording Academy's message congratulating her.

While it's unclear whether the Grammys will be able to help her get those extra tix, Grande's reaction is a step forward from last year when she skipped the ceremony all together after a conflict with the show's producer Ken Ehrlich. Though she wasn't there to claim it in person, Grande won her first Grammy in 2019 with Best Pop Vocal Album for Sweetener. Instead, she celebrated on Twitter, but let's be honest, that's not the same. This time, it appears she will be in attendance should she win — hopefully, surrounded by everyone who helped her get to that Grammys stage.