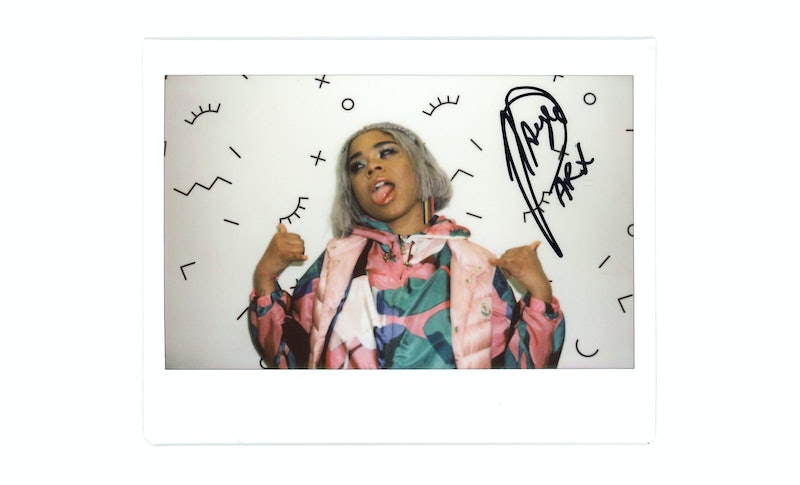 When celebrities hang out at Bustle, we want to give them the chance to leave their mark. Literally. So we hand them a pen, a piece of paper, a few questions, and ask them to get creative. The rest is up to them. This time, "Thank U, Next" & "7 Rings" songwriter and singer Tayla Parx is leaving her mark in the Bustle Booth.

If Tayla Parx was a plant, she’d be a cactus. "No matter where it’s placed, it can get through anything," the singer/songwriter best known for writing Ariana Grande's "Thank U, Next" tells Bustle while at the New York office recently. It’s why, during Parx's recent opening stint on Lizzo’s U.S. tour, she covered the stage in the prickly plants to make each city she was in feel more like home. "I’m literally a cactus addict," says the star. "It’s getting dangerous in my apartment." (Something her manager confirms.)

When not accidentally curating her own personal greenhouse, the pastel-haired Parx (né Taylor Parks) is busy writing hits for artists like Janelle Monáe ("Pynk"), Panic! at the Disco ("High Hopes"), and her friend Grande, who she's been working with since 2014. Parx co-wrote six songs for Thank U, Next including "7 Rings", and is one of the recipients of the seven diamond rings that famously inspired the track. Unfortunately, she wasn't wearing hers when she stopped by the Bustle office. "I didn’t trust myself to take it on tour. I can’t even keep up with my passport," she says, "but the ring reminds of that point in my life when I was able to create such a beautiful body of work with my friend and be a part of a dope record."

Parx may not be great at locating her passport, but she's very good at making dope records, including her debut album, We Need To Talk, released in April. The 25-year-old started off her pop culture career playing Little Inez in 2007's movie version of Hairspray, but her songwriting career took off in 2013, when she co-wrote Sevyn Streeter's single "Call Me Crazy." Today, Parx approaches writing session with other artists almost like a therapist would, listening closely to each persons needs and interests to help determine the kind of song that fits them best.

"When I’m creating somebody else’s story, it’s me showing empathy," she explains. "It’s me being like, 'I get you, I see who you are.' I’m not judging you, I’m just here to listen and literally accept you as you are and get the world to relate to that, too."

With her own music, as heard on the genre-bending We Need To Talk, Parx is hoping people will want to listen to her personal stories of love and heartbreak. "Right now I’m just excited to build a friendship with my fans and that means I need to show them my authentic self," she says. That includes sharing her views on sexuality, which she believes is fluid. On "I Want You," a tongue and cheek love song about wanting more than one lover, Parx declares, "I want you, and you, and you, and you, too," never using any pronouns.

"I don’t say 'him' or 'her' my entire album," she says now. "I want you to look at whoever you’re in love with and be able to feel the same exact way that I feel about the person I wrote it about."

Her wish is that her all-inclusive "I Want You" line will one day get the "Thank U, Next" treatment by becoming part of our everyday vernacular. "For months, I can't help but hear 'thank you' and not hear 'next' after it, everybody's been saying it to me," Parx says of the now meme-famous phrase. "Like, everybody."

Not that she minds, though; she's thrilled people love the music she makes — especially, since she's still surprised that she gets to make music at all. "I’m a little black girl from Texas," she explains. "If I can do it, there’s a lot of people that can do it, too."