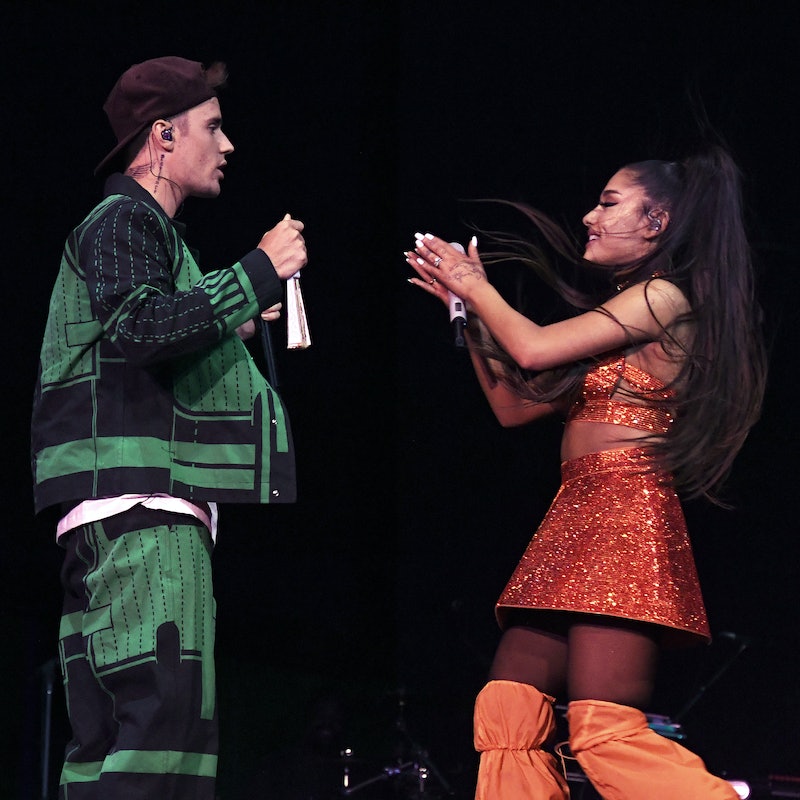 "Stuck With U," Ariana Grande and Justin Bieber's long-awaited collaboration debuted at the top of the Billboard Hot 100 last week, but not everyone is happy that the charity single has been so successful. After the controversial rapper accused the pair of cheating to achieve their No. 1 spot on the charts, Ariana Grande and Justin Bieber responded to Tekashi69's rant about Billboard, in which he also claimed that the magazine was "corrupt."

Tekashi's post-prison single, "GOOBA," debuted at No. 3 on the chart — just behind Grande and Bieber's "Stuck With U" and the remix of "Say So" — and in response, the rapper claimed that Billboard was "cheating" the chart placements on Instagram. "YOU’RE A LIE AND CORRUPT. YOU GOT CAUGHT CHEATING AND THE WORLD WILL KNOW," he wrote, along with a since-deleted post claiming that there were "6 credit cards used to buy 60,000 copies [of 'Stuck With U'] in the last hour." His posts also notably only accused Grande of "buying" those alleged last minute copies of the song by name, which the singer pointed out in her response post.

"I don’t give my energy to drama or strange accusations normally but this has gone a little too far," Grande wrote on Instagram late Monday, after thanking "everybody who supported the song" and who donated to the First Responders Children Foundation. "My fans bought the song. JUSTIN’S fans bought the song. OUR fans bought this song (never more than four copies each, AS THE RULES STATE). They are ride or die ... and I thank god every day that I have them in my life."

"Sales count for more than streams. U can not discredit this as hard as u try," she continued, seemingly responding to the rapper's claim that his streams weren't counted correctly by Billboard. "To anybody that is displeased with their placement on the chart this week or who is spending their time racking their brain thinking of as many ways as they can to discredit hardworking women (and only the women for some reason.....), I ask u to take a moment to humble yourself." (Tekashi apologized to Grande in an Instagram video on May 19, saying that he didn't have anything against her personally, and that "my frustration is with Billboard.")

Grande also told Tekashi — though she didn't explicitly name the rapper — to "be grateful" for the continued support of his fans, regardless of his chart placement. She ended her post by once again thanking everyone for helping her and Bieber "raise a lot of money for a very important cause," before throwing a little bit of shade at the rapper. "Congratulations to all my talented ass peers in the top ten this week," she wrote. "Even number 3."

While Teskashi didn't call out Bieber in his social media rants, Grande's collaborator also weighed in on the situation on his Instagram Story, defending the Billboard charts and their song's success. "He is counting his global streams and this is a domestic chart, so only domestic streams count," Bieber explained, adding that his and Grande's teams strategically didn't disclose their numbers until the end of the week. "All our sales were legit because our fans are amazing and bought them. Don't discredit our fanbase with false info."

Most importantly, Bieber defended Grande against Tekashi's biased accusations, ending his post by explaining that "Stuck With U" is "my song with Ariana Grande and I'm honored to work with her" and raise money for a deserving cause. "If [you're] gonna say her name, make sure you say mine because it's our song."

Congratulations to Bieber and Grande on their No. 1 single.

More like this
Twitter Is Having A Meltdown Over Buying Beyoncé Renaissance Tour Tickets
By Jake Viswanath
Beyoncé Just Announced Tour Dates: Here's How To Cuff Tickets To Her 2023 Shows
By Jake Viswanath
All The Best Celebrity Reactions At The 2023 Grammys
By Brad Witter
The Beyhive Is Mad At Harry Styles After Beyoncé’s Album Of The Year Snub
By Jake Viswanath
Get Even More From Bustle — Sign Up For The Newsletter
From hair trends to relationship advice, our daily newsletter has everything you need to sound like a person who’s on TikTok, even if you aren’t.