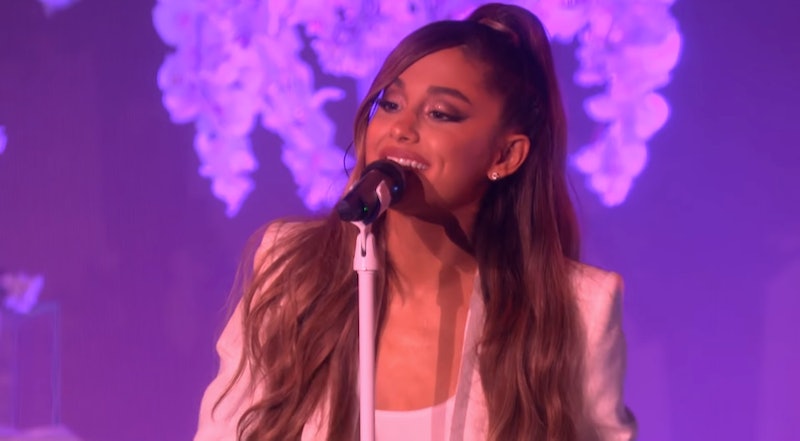 Anyone who follows Ariana Grande on Instagram knows that she's a fan of The First Wives Club. And now, she's translating that love into her music with Kristin Chenoweth and Grande's "You Don't Own Me" cover. The 1963 Lesley Gore song has been recorded by many other artists over the years, like Joan Jett and Grace, but one of its biggest resurgences was due to the 1996 movie The First Wives Club. As fans will remember, the first time Grande performed "Thank U, Next," she recreated the iconic "You Don't Own Me" scene from the 1996 film — making her duet with Chenoweth delightfully full circle.

Not only is Grande a huge First Wives Club fan, she's also a huge fan of the song itself. In 2012, the singer tweeted about "You Don't Own Me," gushing, "I love Leslie Gore so much." So, her connection to the song goes way back, and that passion is evident in her new recording of the track with Chenoweth. But of course, her love of the original track isn't the only thing that makes this collab extra special for Grande. Her longtime admiration and personal connection to Chenoweth is what made this a surreal experience.

The "God Is A Woman" singer has worked alongside Chenoweth in the past. They both appeared in Hairspray Live! back in 2016, and Grande also joined Chenoweth for the 15th anniversary special of Wicked, which was her first performance after her breakup with Pete Davidson — the event that led to "Thank U, Next." After "You Don't Own Me" was released in the late hours of Thursday, Sept. 26, Grande took to Instagram and Twitter to express just how much this collaboration means to her. "i truly can’t put into words how much it means to me ! i truly can't believe this is even real," she wrote.

Chenoweth responded with an equally adoring message, tweeting, "You are my baby and i love you. I couldn't be more proud of you." She continued, thanking Grande for being on her album, which also features Dolly Parton, Jennifer Hudson, and Reba McEntire. "Thank you for blessing the works with your gift. And for being on my record. I love you very much," she added.

Chenoweth recently advocated for Grande to star in the Wicked movie while speaking to Us Weekly. In fact, it was through the Broadway musical that they first met, as Chenoweth recounted to ABC News Radio on Friday morning. It turns out, she first met Grande when the Sweetener singer was a young fan at a performance of Wicked. Chenoweth also told ABC that she considers herself a mentor to Grande, so it was a no-brainer to get Grande involved in her album. "Well I've known her since she was eight so I had to ask my baby," Chenoweth told ABC. “I wanted to bring old school/new school together ... and I've always felt like Ari's voice would lend itself very well to Lesley's style."

The two iconic singers have yet to release a music video for their "You Don't Own Me" duet. But if they do, there's no question they'll do the First Wives Club scene justice.

More like this
22 Movies On Netflix That Are Perfect For The Whole Family
By Bustle Editors
Now That 'Renaissance' Is Here, Let’s Revisit Beyoncé’s First Solo Album From 2003
By Grace Wehniainen
Selena + Chef Season 4 Was Filmed At Hannah Montana's Old Malibu House
By Jake Viswanath
Reese Witherspoon Gave Fans Hope For 'Legally Blonde 3' After This Surprising Movie Inspired Her
By Jake Viswanath
Get Even More From Bustle — Sign Up For The Newsletter