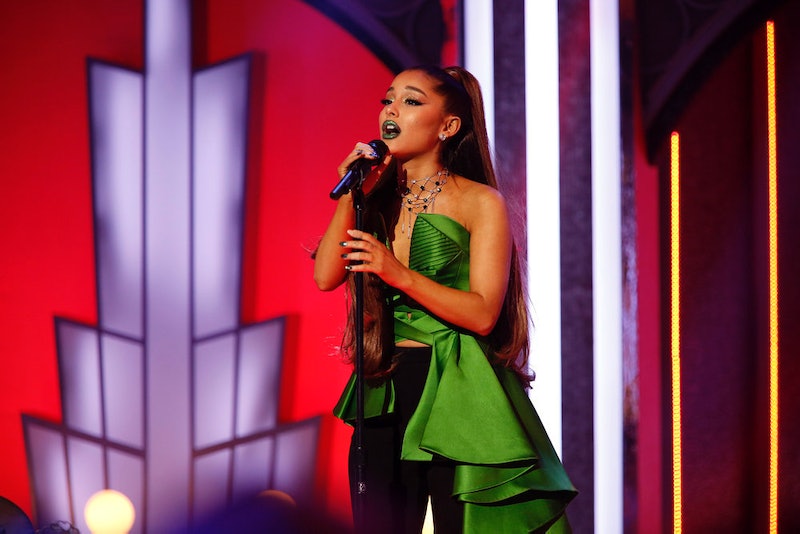 No one would blame anyone for melting into a puddle of emotions after seeing Ariana Grande's Wicked performance of "The Wizard and I." On Monday night, Oct. 29, Grande gave her first post-breakup performance during NBC’s A Very Wicked Halloween: Celebrating 15 Years on Broadway. And while it was a sign that Grande is moving on, it also proved that, yes, she is a born Broadway star, something Arianators have known for awhile now.

Grande channeled her inner Elphaba to sing about what meeting the wizard would be like for the televised special. And while she was there, she also gave fans last minute Halloween costume ideas with her all-green look, including her lipstick. Though the song talks about Elphaba's hopes that the Wizard will change her, there's no need to de-greenify Grande.

"The Wizard and I" is the perfect vehicle for that powerhouse voice of Grande's — and let's be honest, a great audition for when the powers that be finally make the theatrical version of the musical. But it's the reaction from the fans in the audience that's really special. Throughout the song, the camera cuts to the crowd, mostly in Wicked costumes, who are singing right along with Grande, and all appear moved by her performance.

Why wouldn't people be excited for Grande's performance? After all, during an episode of Carpool Karaoke: The Series she told Seth MacFarlane that “one of my dream roles is to play Elphaba. I would do it tomorrow. I’d cancel my whole sh*t," she said. "That’s my dream.” And finally, it came true.

There was one particular fan in the crowd that caught Twitter user's @hbelam's attention. It was a young woman in a tiny black hat who had her hand covering her mouth as if she just couldn't handle what was happening. "We're all this girl right here," they joked and honestly, same.

Even, Wicked made the case that Grande was basically born to sing these songs. The Broadway musical's official Twitter account shared a sweet photo of the original Glinda the Good Witch, Kristin Chenoweth with a very little Grande. "This photo might be from 15 years, but do any of these witches look familiar?" asked the account. Well, of course they do. And it's good to see Grande's Nonna, aka Marjorie Grande, right there with the future pop star.

Grande's Wicked appearance was her first major performance since her breakup with ex-fiancé Pete Davidson. She brought no attention to that, though, she just sang her little heart out. However, her brother Frankie Grande did recently updated fans on how his sister is doing since calling off her engagement.

Frankie told Entertainment Tonight that "Ariana is doing well" and said that she's moving forward after her breakup and the death of her ex boyfriend Mac Miller. "She’s working really hard, you know, getting prepped for tour and another album,” he said. "Like, it’s too much! Lots of stuff is going on.”

Grande certainly has been throwing herself into her work, announcing her Sweetener tour, which kicks off next year, and releasing photos from inside the studio where she's teased she's working on her fifth album. Grande might not be defying gravity, but she certainly is moving on the best way she knows how, by keeping herself busy with music. Clearly, her future really is unlimited.

More like this
Ed Sheeran’s Surprise Gig Included An Iconic Britney Spears Tribute
By Bustle Editors and Darshita Goyal
Mariah Carey Is Releasing Her “Lost” '90s Grunge Album
By El Hunt
Everything To Know About Taylor Swift’s 10th Studio Album, 'Midnights'
By Grace Wehniainen and Jake Viswanath
Twitter Is Freaking Out Over Rihanna’s 2023 Super Bowl Halftime Show Announcement
By Stephanie Topacio Long
Get Even More From Bustle — Sign Up For The Newsletter