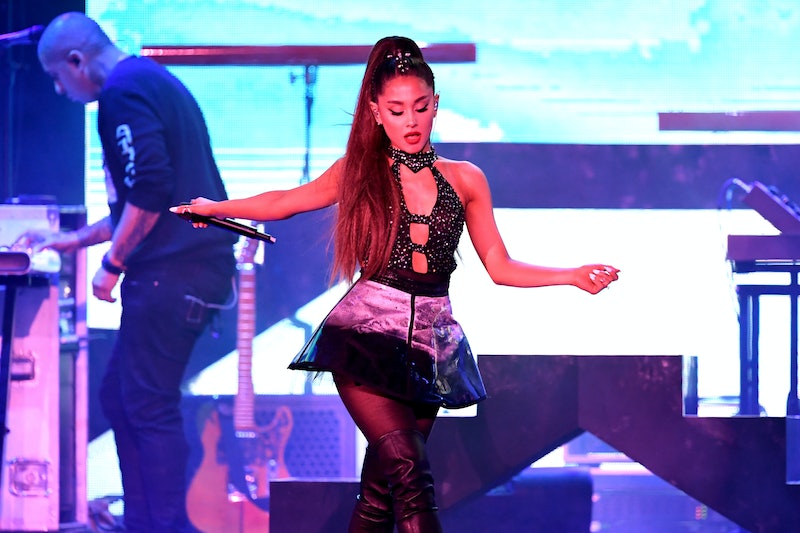 Ariana Grande may have "no tears left to cry," but she has plenty more albums to create. While the Thank U, Next singer is currently on her Sweetener World Tour, she's said over and over that she's continuing to make new music from the road. On Tuesday during a quick chat with fans on Twitter, Ariana Grande hinted at new music, but before fans get too excited, it's not a new album. Instead, this new project seems to be a soundtrack of some kind.

During a Twitter Q&A with fans on June 4, after saying that she's currently writing music for herself on her own timeline, Grande said in a tweet, "personal music aside, we been working on a soundtrack together," tagging songwriter Savan Kotecha. Then Grande said, "no more questions," followed by the tea emoji.

It's so typical of Grande to give fans just enough information to make them ready to empty out their bank accounts to buy whatever she's selling, and then dip out of the conversation to leave their mouths watering in breathless anticipation. The Arianators don't play, y'all. But Grande's fandom is so strong that they'll put up with these clues — besides, having a vague idea of what kind of soundtrack Grande is working on gives fans plenty of time to dream up their ideal piece of work.

Now, any of Grande's Instagram posts and tweets are fair game for considering clues for speculation of what's-she-up-to. You may even want to look back at the record breaking singer's past posts for an idea of what sort of movie or show Grande's music will accompany. One obvious choice is a SpongeBob SquarePants-related soundtrack, as Grande recently shared a video on her Instagram stories of herself singing "This Grill is Not a Home," which Billboard reported comes from the 2002 episode, "Welcome to the Chum Bucket."

Then again, it's a little bit difficult to imagine SpongeBob set to Grande's velvety vocals, but the possibilities for the singer seem endless. Perhaps a Broadway musical is where Grande's headed with her soundtrack, as the singer got her start with a role in the Broadway musical, 13, in 2008 when she was 14.

More recently Grande performed in the NBC special, A Very Wicked Halloween, celebrating Wicked's 15th anniversary by singing “The Wizard and I." Could Grande return to her Broadway roots with an original musical? Or maybe she's working on something for the big screen. In the past, Grande appeared on the Trolls soundtrack with her song "They Don't Know," so perhaps it'll be for another animated film.

No matter what Grande is working on, she's made it clear that she is working on new music, and it seems like she never really stops.

On an Instagram story from June 3, Grande posted a photo of the clouds from a plane, and in tiny font commented, "wrote anotha [sic] song on the plane." While she likely could have spent time catching up on sleep or watching a movie, Grande probably cranked out another hit. It's unclear when, or even if, we'll hear the new songs that the "Break Up With Your Girlfriend" singer is creating. But that's half the fun.

In the same tweet she posted that announced a soundtrack, Grande revealed, "i’m not giving myself any deadlines ... just expressing n challenging myself." The pop superstar will release her music when she's ready, and that includes whatever new "soundtrack" she's cooking up.