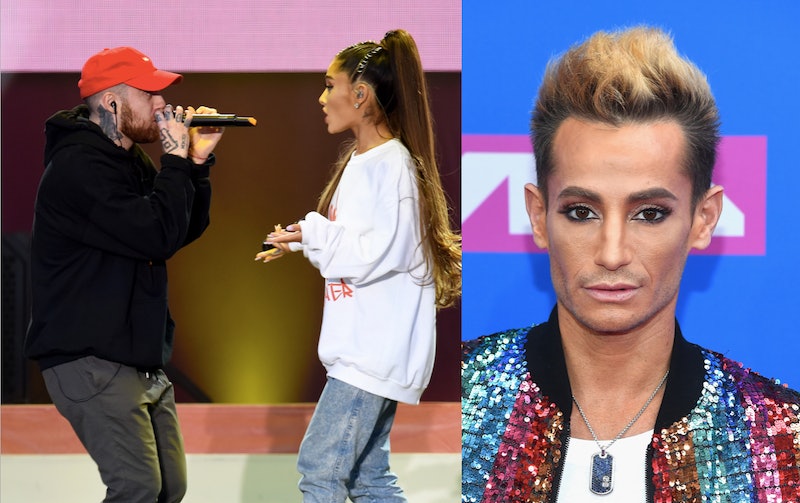 Less than a week after the rapper passed away, Ariana Grande's brother Frankie posted a tribute to Mac Miller. In a lengthy Instagram post on Wednesday, Frankie Grande recounted his time knowing Miller, and how the 26-year-old artist helped him through his own struggles with substance abuse. TMZ initially reported that Miller's death was caused by an apparent overdose, although this information has not been confirmed. (Bustle previously reached out to reps for Miller, but did not receive an immediate response.)

Along with a black-and-white photo of Miller, Frankie wrote:

"I am beyond heartbroken over Malcolm’s death. He was a good friend and was wonderful to my sister. He was the reason I went to the rehabilitation center where I was detoxed safely from all of the drugs alcohol and medications I was taking, when I couldn’t imagine living without them."

"It was the place where I found the community of support that showed me that living life without drugs was a possibility and I would never have discovered that if it weren’t for Malcolm. I remember when I would get 30, 60, 90 days clean and Malcom would be there with a gift and a card and words of encouragement... telling me that he knew how hard getting sober is and how impressed he was that I was succeeding."

Frankie's message pointed out, "Addiction is a TERRIBLE disease… many people are suffering from addiction like I am and many many of them are losing. Those of us who are struggling with addiction must stay strong. We must continue to work HARD on ourselves every single day and help each other." He also reminded people who may be struggling that, "This is a difficult road but YOU DO NOT HAVE TO TRUDGE IT ALONE." He concluded the post with phone numbers for Alcoholics Anonymous, Narcotics Anonymous, and the Suicide Prevention Lifeline.

As Frankie's post mentions, his sister Ariana had a close connection with Miller. The pair collaborated on music and previously dated before publicly announcing their split in May of this year. At that time, she wrote in an Instagram Story,

While Ariana hasn't given any statements about Miller's passing (which is more than understandable, given what a major loss this is), she did post a black-and-white photo on her Instagram on Saturday night. Even though there's no caption, the sentiment speaks for itself.

Miller's mom Karen Meyers also shared an Instagram photo with her son, featuring the two smiling at a baseball game.

In addition to the Miller and Grande families, so many people online have honored the rapper's memory — whether fans or fellow celebrities. And in the time since his passing, it's become more and more clear just how much Mac Miller is missed.