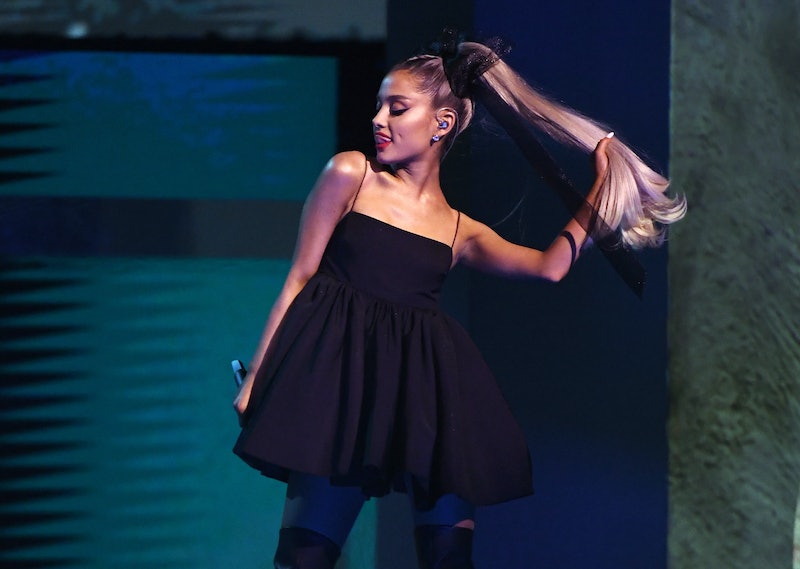 The wax figures at Madame Tussauds are legendary. Name a celebrity or major public persona, and chances are, they've been honored with a molded sculpture in their likeness at one point or another. The thing is, though, "likeness," in this case, can be somewhat subject. Well, Ariana Grande reacted to her new wax figure in a comment on @PopCraveNews' Instagram account, and let's just say that her response proved that there's definitely something a little ... off ... about the way it looks.

On May 21, Madame Tussauds unveiled Grande's new figure for their flagship London location, after asking fans to vote for the style in which she'd be crafted back in April. "You chose Classic Ari!" the museum revealed via Twitter. "Now we have her style nailed, you can see @ArianaGrande at Madame Tussauds London for 5 weeks from Friday."

They might have been a tad too self-assured in saying they "nailed" it, though, because fans immediately took them to task on social media for its, um, lack of resemblance. "Y’all need to melt her face a start ove because this ain’t it!!" one fan wrote. "Who dis? We don’t know her," another fan said.

Now, following an onslaught of criticisms from Arianators everywhere, Grande herself has finally decided to respond. "i just wanna talk," she commented on May 26, which is actually like, a pretty chill way to basically say, "Ah, excuse me, but, I have some notes."

So, to be fair, they didn't *fully* botch the figure. There are some aspects of it that are totally spot-on — like her hair, for example. Grande's signature high ponytail is accurately in tact, even down to the metal rings she's used to accessorize her hair in the past. Her outfit is totally spot-on, too. Oversized sweatshirts and thigh-high boots are for sure her thing.

On the other hand, her face is just like ... not right. Some fans have been saying that the eyebrows are what throws it off. Other fans have pointed out the nose as the most problematic area, while a few more people have said its the lips. Point being: Fans are not impressed.

While Grande's comment about her own wax figure wasn't as nearly harsh as some of other things that have been said about it since it was unveiled, the phrase, "i just wanna talk," doesn't exactly sound like she thinks they "nailed" it, though, either. It sounds like she's got some feedback for the museum, but it's unclear whether or not anything can be done about it at this point anyway.

Look — they gave it a good shot. And it's not the first time the public has disagreed with Madame Tussauds' renderings. For the most part, it seems like the figures either end up being total hits — see: Khloe Kardashian's sculpture or Priyanka Chopra's model — or epic misses — see (at your own risk): the wax mask replicas of Prince Harry and Meghan Markle's faces.

Madame Tussauds has yet to publicly respond to the controversy over Grande's figure. Keep your fingers crossed that if the singer and the museum *do* get in touch, though, that Grande will let fans know how it all goes down.

More like this
'Cheers' Stars Pay Tribute To Kirstie Alley After Her Death To Cancer At 71
By Jake Viswanath
Hilary Duff Details Her "Horrifying" Eating Disorder As A Teenager
By Radhika Menon
17 Photos Of The 'Wednesday' Cast Vs. The 1991 'Addams Family' Cast
By Grace Wehniainen
Is Blake Lively Or Penn Badgley The Richest 'Gossip Girl' Star From The OG Series?
By Hugh McIntyre
Get Even More From Bustle — Sign Up For The Newsletter