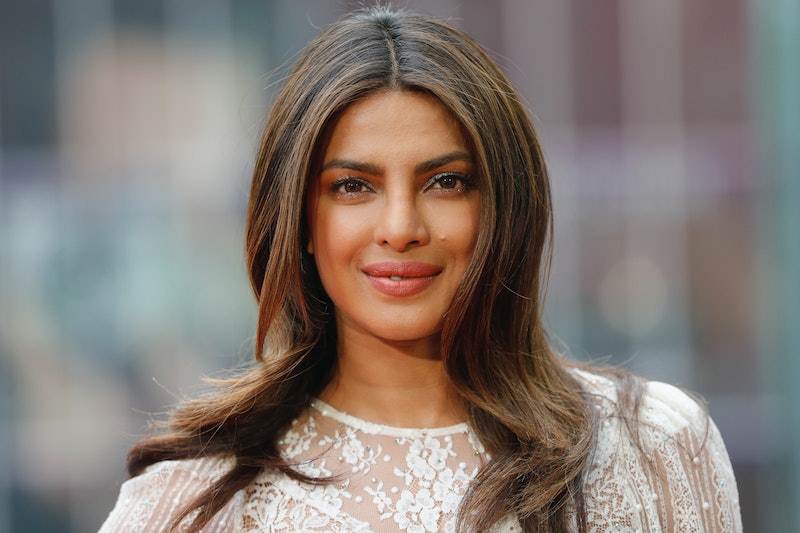 As the saying goes, life imitates arts, but in this particular instance, art is imitating life. Priyanka Chopra's Madame Tussauds wax figure was unveiled on Thursday in New York City. According to People, the figure will also appear in London, Sydney, and Asia sometime later this year. Until then, fans need to check out the Isn't It Romantic actor's NYC-based figure, because the resemblance between it and the real-life Chopra is unbelievable.

The former Quantico star took to Instagram on Feb. 7 to share photos and a video from the unveiling. As you can see below, even Chopra couldn't believe how much the wax figure looks like her. "That's crazy," she's heard saying in the video. After walking around the figure, she then declares, "That's insane."

The 36-year-old captioned her Instagram, " [mind blown emoji] <-- Me when I saw my new wax figure at Madame Tussauds in NYC @nycwax (Coming to other locations soon!!)"

According to Chopra's Instagram Story posted on Thursday, the creation for her wax figure began six months ago. She shared video footage of her meeting with the artists at her NYC apartment, who also took photos and measurements of her face and body prior to designing the wax masterpiece.

Madame Tussauds artists chose to recreate Chopra's 2016 Emmy Awards look, in which she wore a custom red dress designed by Jason Wu. As for the hand placement, well, it's a great way to showcase Chopra's diamond ring from Nick Jonas. Yes, her wax figure is also sporting Chopra's engagement and wedding bling.

The actor and producer was selected by Madame Tussauds for a specific reason — she's an influential woman. "Priyanka Chopra is a global super star who is loved and admired by fans all over the world for her talent, intellect, beauty and compassion," Christine Haughney, the regional head of marketing at ‎Merlin Entertainments, plc, said (via People).

"We are excited to celebrate such an empowering role-model globally and to welcome her to Madame Tussauds New York, in her adopted-home city, to launch her first ever figure is truly special," Haughney continued.

It seems like Chopra is overjoyed at how her wax figure turned out. On her Instagram Story, she also shared a snap with the figure and wrote, "MY NEW TWIN!!" They really do look like twins, don't they?

Similar to Chopra, there have been many other successful celebrity Madame Tussauds wax figures, like reality star Khloé Kardashian and her sister Kylie Jenner. Also, if you haven't seen Ryan Golsing's wax figure from Madame Tussauds in Orlando, well, you need to take a look. Even Prince Harry and Meghan Markle's wax recreations at the Madame Tussauds London location are spot-on.

However, the same can't be said for other figures that haven't gone over well, including another wax figure of Gosling from Madame Tussauds in Berlin. Or that Beyoncé wax figure from Louis Tussaud's Wax Museum in Niagara Falls, Ontario, Canada.

Queen Bey's so-called recreation was unveiled in February 2018 and received much criticism after many felt the figure looked to be white-washed. The same museum faced backlash for a different Beyoncé wax figure in July 2017 for it looking nothing like her, in addition to her having noticeably lighter skin. (Bustle previously reached out to reps for Louis Tussaud's Wax Museum and Beyoncé, but did not receive an immediate response.)

Well, Chopra should count herself lucky that her wax figure turned out so well. Not only does it resemble her physical appearance, but also her fun and loving spirit.