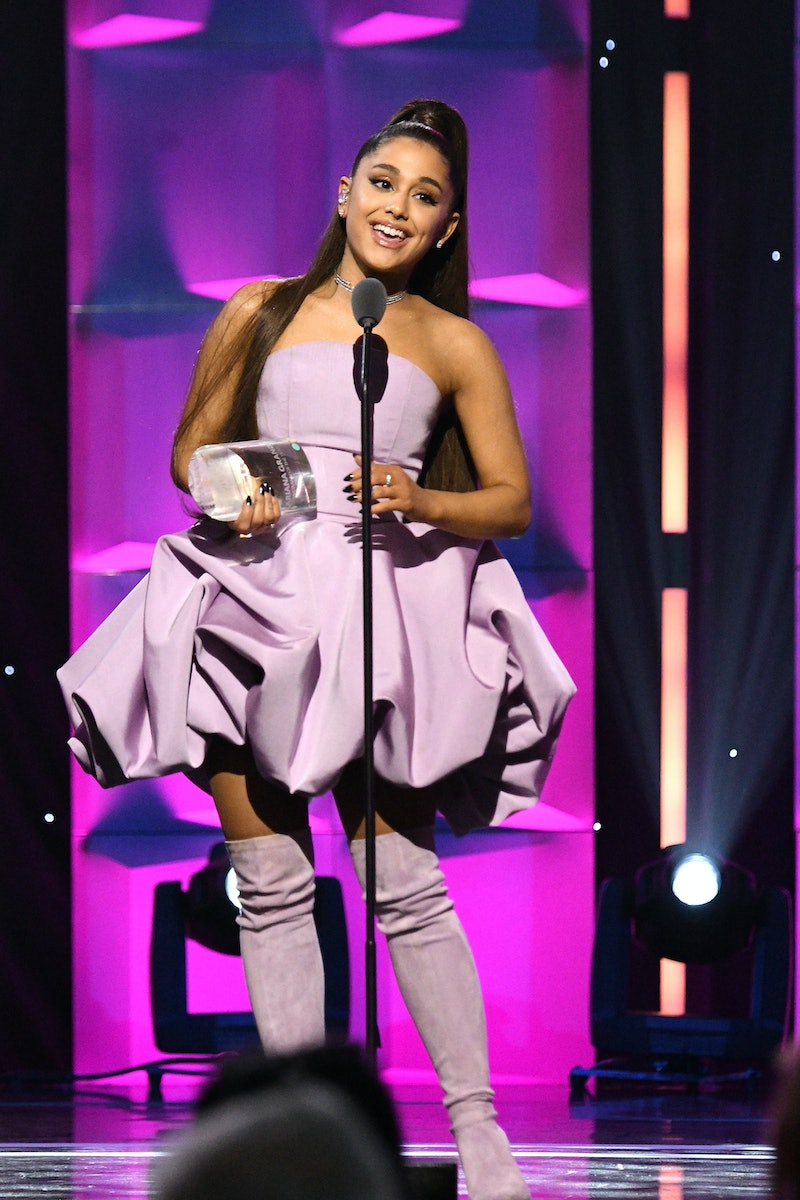 It appears that there's no bad blood between exes Ariana Grande and Pete Davidson. As Cosmopolitan reported, Ariana Grande commented on Pete Davidson and Kate Beckinsale's dating rumors after being asked about what she thinks about the possible new couple. And her message was all kinds of positive.

The publication reported that Grande was out and about in Culver City, California on Feb. 6 when a member of the paparazzi asked her what she thought about her ex's reported new relationship. The singer reportedly replied by saying that the pairing is "so cute!" It's so nice to see that she's nothing but supportive of her ex supposedly moving on with Beckinsale.

It shouldn't really come as shock to see that Grande shared such a sweet message about her ex. After all, in addition to being all about love and light, a source previously related to Us Weekly, in an article published on Feb. 6, that the "God is a Woman" singer isn't phased by Davidson and Beckinsale's rumored relationship. “Ariana isn’t bothered at all," a source told the publication, in regards to the news about her ex. Another insider added, "The focus is entirely on the album coming out on Friday and can’t wait for fans to hear.”

In case you missed it, Grande's comment comes after it was reported that Davidson and Beckinsale, aka the most random and surprisingly well-matched pairing ever, were possibly an item. According to E! News, the Underworld actor was spotted at one of the Saturday Night Live star's stand-up shows in West Hollywood on Feb. 2. After the event, Davidson and Beckinsale were spotted holding hands as they left the venue, which definitely helped spark up those romance rumors. (Bustle previously reached out to reps for Davidson and Beckinsale for comment about the relationship reports, but did not receive a response.)

Romance rumors linking the two first emerged following the 2019 Golden Globes in early January, as Davidson and Beckinsale were reportedly spotted getting close at Netflix's after party event, per Page Six. Even though they've been seen getting close on multiple occasions, don't jump to any conclusions about their relationship just yet.

According to multiple sources, the two are keeping things pretty casual right now. "She has fun and doesn't take anything too seriously. She has spent some time with him and thinks he's very funny and charming. Its definitely not anything intense," a "Beckinsale insider" told E! News. Another insider revealed to the publication that "they are going to keep talking and having fun together." Clearly, Beckinsale and Davidson are taking things slow when it comes to their (potential) relationship.

After experiencing his whirlwind romance with his ex, Grande, it makes sense that Davidson would want to take things a bit slow as he returns to the dating world. As you're likely well aware, the SNL actor and the singer were previously linked from May to October of 2018, with the couple even getting engaged, as Us Weekly reported in June.

When they did split in October, both parties appeared to wish each other the best, as Davidson shared his well wishes for Grande on the Nov. 3 episode of SNL. Similarly, the "7 Rings" singer also shared kind thoughts about her ex on social media on multiple occasions, per E! News. And, apparently, she's still all about spreading the kindness, as her recent comment about her ex's rumored relationship shows.

Whether or not Davidson and Beckinsale are truly an item or not, it's nice to see that the comedian's ex-girlfriend, Grande, is in total support of the pair's possible relationship.