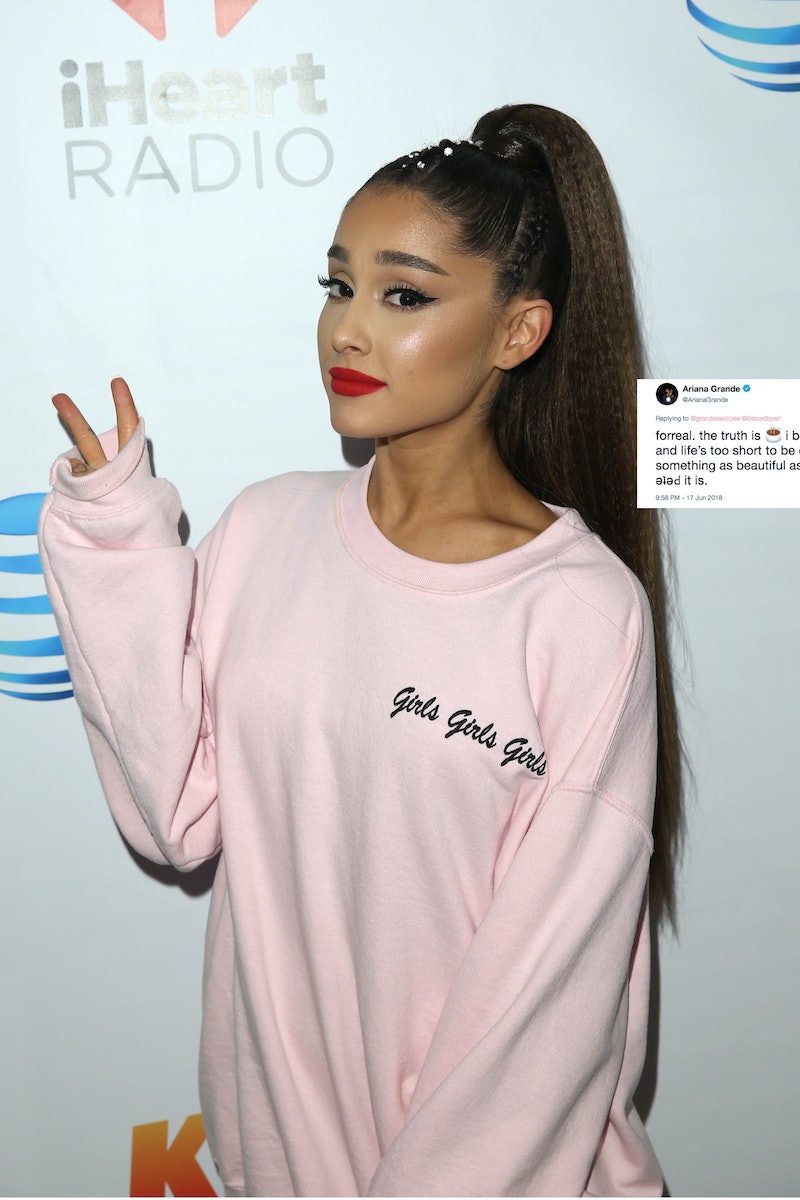 Have any thoughts on the state of Ariana Grande and Pete Davidson's relationship? Here's a word of advice: those who don't have anything nice to say shouldn't say anything at all. Why? The "No Tears Left To Cry" singer simply isn't interested in your negativity, that's why. In case it wasn't clear already, Ariana Grande's response to a fan calling her "dumb" on Twitter proves the 24-year-old superstar isn't here for haters who don't support her relationship. That's probably a really good thing, especially given that she and Davidson certainly don't seem too keen on breaking up any time soon. (Or maybe ever, if those engagement reports are true.)

In fact, from the looks of it, Grande and Davidson's relatively new romance seems to be getting more and more serious every day. After taking their relationship public about a month ago, in mid-May. On June 11, reports claiming Grande and Davidson were engaged began to circulate. And while neither party has officially confirmed those reports, Davidson did seem to unofficially confirm the engagement via a truly heartwarming Instagram post Friday, June 15, which pictured the couple hand-in-hand. (Grande's reported engagement ring, naturally, takes center stage in the photo.) Just a few days after seemingly confirming her engagement, Grande took to Instagram to share a lilting tidbit from one of the tracks off her upcoming album, Sweetener. When fans subsequently bombarded the singer with tweets inquiring about the song, Grande revealed that the track is titled after her beau's first name, "Pete."

Some fans were really into the choice. "Thats a v creative name," wrote @arimilart, commenting on the Twitter back-and-forth. But, of course, some people had a few not-so-nice things to say about it. Well, one person, anyway. Commenting on that Pete-related string of tweets Sunday night, one fan told Grande exactly how they feel about the newly revealed song title. "'Pete' girl we know you love him but are you dumb," the tweet read. And Grande wasn't having it. Grande replied to the hateful comment almost immediately, shutting down the Twitter user with a simple, "nah."

Always one to stand up for what she believes in (which, in this case, seems to be the very real strength of her and Davidson's romance), Grande didn't stop there. Another Grande fan jumped in after seeing the exchange, writing, "u really don't give a f*ck do you." The fan seemingly applauded Grande for her ostensible ability not care about the haters, or their opinions about the decisions she makes in her personal life, like naming a song after her reported fiancé.

To that, Grande agreed, tweeting that she wasn't going to let anyone bring down her relationship with Davidson. "Forreal," she wrote back, before segueing into what sounds like an incredibly heartfelt testament to the legitimacy of her new relationship, as fast-paced as it's been. Continuing the tweet, Grande wrote,

The truth is [teacup emoji] i been the f*ck thru it and life's too short to be cryptic n sh*t about something as beautiful as this love I'm in. so ǝʇǝԀ it is.

Pretty tough to argue with that logic, no? At the end of the day, longstanding romance or not, the fact that Grande and Davidson are pretty obviously in love is a truth that's difficult to ignore. (Based on their respective social media activity, anyway.) And while it might be tempting to place judgements on such a public relationship, it seems like fans should know that Grande isn't going to take any critiques of her relationship lying down. She's especially not going to let a fan call her "dum" just for being in love. Sharing that love with her following openly and honestly the way she has been can't be easy, so perhaps fans can do their part to give her a break.