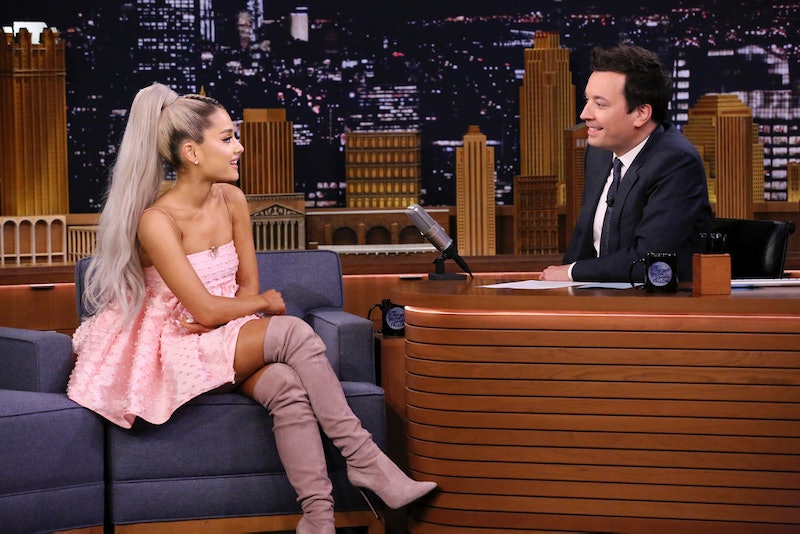 Ariana Grande co-hosted The Tonight Show Starring Jimmy Fallon on May 1, and all that extra time on the talk show meant the singer could reveal a ton of intel on her new album. Grande announced her new album is called Sweetener, which will drop this summer. She also sang the first single off the album "No Left Tears To Cry" for the first time on TV. And like her new song, it seems that Sweetener will subtly honor the people who affected by the Manchester Arena tragedy.

As the only guest on The Tonight Show, Grande participated in sketches and games with Fallon showing her tremendous versatility as a performer. And when she sat down with the host for an interview, she opened up about her first album since 2016's Dangerous Woman — and since the attack at her concert in Manchester, England. Grande said the album is called Sweetener because it's "about bringing light to a situation or to someone's life or somebody else who brings light to your life or sweetening the situation." As Fallon said, "Everyone needs a little sweetening."

Grande didn't explicitly state that Sweetener would be a tribute to the victims of the tragedy that occurred on May 22, 2017, but it stands to reason that she wants to bring lightness to the families of the victims and her fans after such a dark event. Especially since Fallon read Grande's statement that she posted on social media after the attack. She wrote, "Our response to this violence must be to come closer together, to help each other, to love more, to sing louder, and to live more kindly and generously than we did before."

Grande also gave the names of some of the songs on Sweetener. As Grande mentioned to Fallon, fans may already know about the song "r.e.m." since she "tweet vomited" the title and some of the lyrics on April 28. She had teased the tracklist in the "No Tears Left To Cry" music video as well, which absolutely didn't go unnoticed by fans on the internet, but she told Fallon that the track list in the video does not have the songs in order.

Since the tracklist was fairly hard to read in the "No Tears Left To Cry" video — and since you might have been distracted by Grande's face masks — it's appreciated that she gave the official names of the songs. Along with "No Tears Left To Cry," Grande confirmed that "The Light Is Coming" and "God Is A Woman" will be on Sweetener.

The first song on Sweetener will be an intro, and it's called "Raindrops," which perfectly ties into the emoji that has been used for "No Tears Left To Cry." Grande said that "Raindrops" is an a cappella sample of a 1950s song called "The Angel Cried." And after she recorded her part, she discovered that the original song was actually co-written by her grandfather's best friend Charlie Calello, who she used to hang out with when she was growing up in her hometown of Boca Raton, Florida. Grande's grandfather passed away in 2014, and she told Fallon that this surprising connection was as if he was telling her, "The album's done, girl."

Beyond looking forward to her fourth studio album, Grande said that she'll be doing "something special" on the 20th of every month leading up to the release of Sweetener. For May 20, Grande will be performing at the 2018 Billboard Music Awards. Grande is nominated for Top Social Artist at the awards show hosted by Kelly Clarkson and her performance hadn't been announced yet. And even though she didn't mention it, "No Tears Left To Cry" was released on April 20, so the song and music video also tied into her plan.

Grande was trying not to give the actual release date of her album on The Tonight Show, but she couldn't help but give another hint. She said there are only three 20ths before the album is released. That means that Sweetener will most likely drop on Friday, July 20.

In Grande's message after the attack, Grande wrote, "Music is meant to heal us, to bring us together, to make us happy. So that is what it will continue to do for us. We will continue in honor of the ones we lost, their loved ones, my fans, and all affected by this tragedy." And with Sweetener, she stands by that statement by bringing more light and happiness into the world.