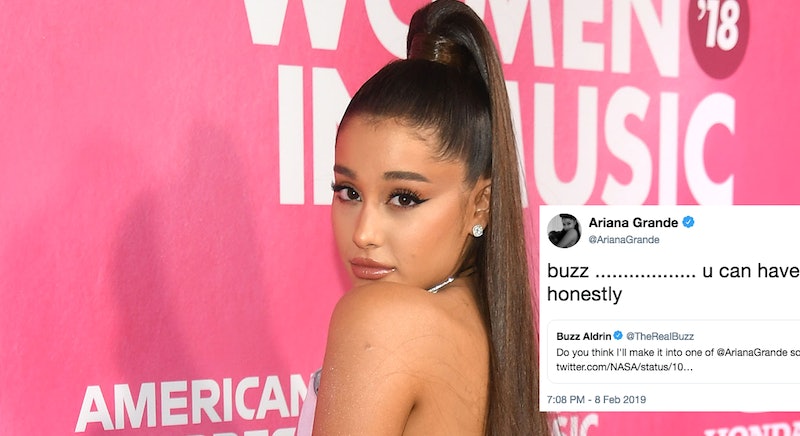 Proving that she really is one of her generation's brightest stars, Ariana Grande's Twitter exchange with NASA was truly out of this world. (Yes, that NASA — as in the National Aeronautics and Space Administration.) After Grande dropped her newest album, Thank U ,Next on Friday, Feb. 8, its metaphor-laden third track, “NASA,” quickly became a nationwide trending topic — and the government-run agency behind the United States' space program became one of the millions adding to the conversation.

"Hey @ArianaGrande, we saw 'NASA' trending this morning and thought it was about one of our new discoveries. But we realized that you might need some space," read a tweet sent from the organization's official account.

As any Arianator who can't stop streaming Grande's new album clearly knows, the second half of the tweet was a reference to the "NASA" lyrics. As she sings on the track:

For her part, the pop star responded with four emojis: a black heart, a Star Trek Vulcan salute, a full moon, and a blonde astronaut.

After all, she did pay homage to NASA's famed July 1969 moon landing, with RuPaul's Drag Race star Shangela kicking off the track with a spoken-word intro, putting a spin on astronaut Neil Armstrong’s iconic phrase after walking on the moon for the first time. Says Shangela in the song: “This is one small step for woman / One giant leap for womankind.”

This just so happened to catch the attention of Armstrong's fellow astronaut and Apollo 11 lunar module pilot Buzz Aldrin, who shared NASA's post, tagging Grande. "Do you think I'll make it into one of @ArianaGrande songs too!?" he tweeted.

For this one, Ari, ditched the emojis in her response and truly geeked out.

It was a stellar honor for the singer and "NASA," which tied for the song Grande had the most fun making, as she revealed in response to a fan question on Twitter. (The other was Thank U, Next's second single "7 Rings," by the way.) Even the song's co-writer (and one of Grande's famous ring recipients) Victoria Monét thought, following NASA's recognition, that maybe Disney would play it during their Space Mountain theme park ride. Responded Grande on Twitter, "man we can dream."

Seeing the NASA acronym trending on Twitter, also caught the eyes of Arianators across the globe. "I can’t believe Ariana Grande invented space travel with NASA," wrote one fan.

Another user even thought maybe NASA recruited the pop star for a future mission, writing, "why did I see Ariana Grande and NASA in the news and think they were gonna send her to space.."

Someone even gave Grande credit for promoting STEM education: "Shout out to Ariana Grande for having a song called NASA on her new album. Huge for STEM education."

For others, the song was just a great excuse to break out their own NASA-branded clothing. One fan served up some social media "#NASA Ariana Grande realness." Another thought, maybe, just maybe, she was inspired by AmazingPhil YouTuber Phil Lester, with whom Grande has hung out in the past. (Side note on the song's inspiration: Yes, Grande's ex Pete Davidson wore his own NASA shirt to the 2018 MTV VMAs, but Monét shot down rumors the song was about him in a tweet.)

Regardless of how the song came about, being recognized by both NASA and Aldrin clearly put Grande over the moon.