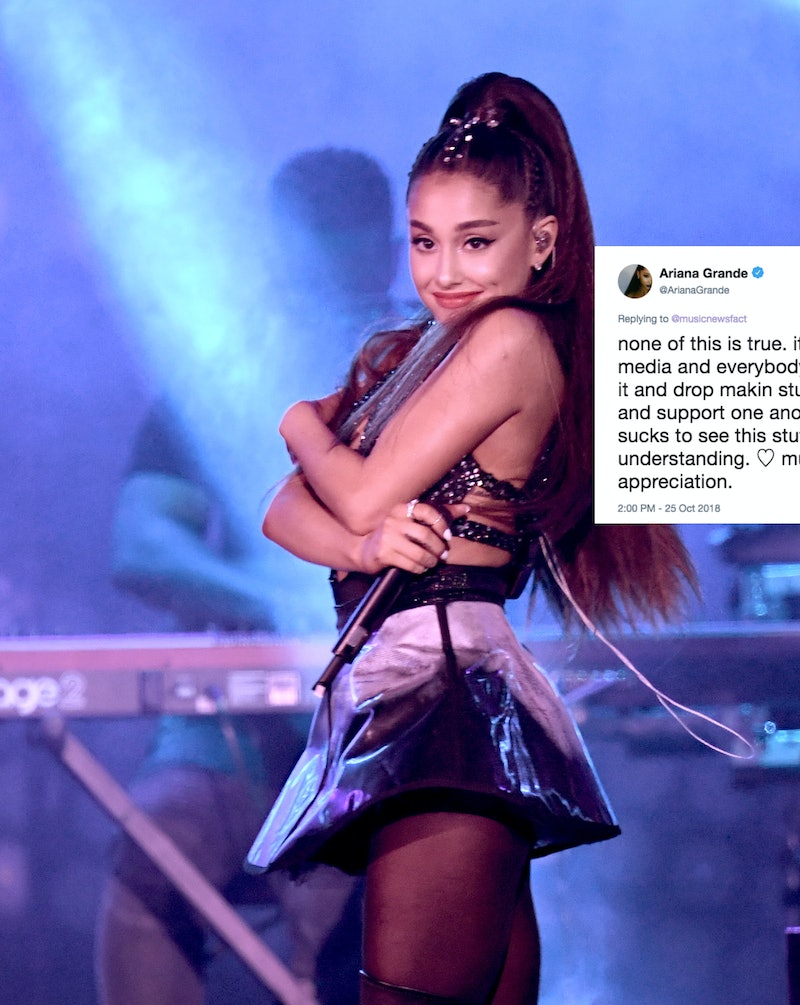 If you're a fan of Ariana Grande's, you would know that the singer is all about love and light. Nothing is more evident of that than one of her latest tweets. On Oct. 25, in response to a tweet that spread a few rumors about her relationship with ex Pete Davidson. Ariana Grande dispelled the Davidson rumors, and once again, emphasized how she's focused on maintaining a positive mindset.

In a since-deleted tweet (which a fan screenshotted and tweeted), the account Music News Facts posted a picture of a Radar Online report that claimed Grande told Davidson to "leave her alone" and changed the locks on her house to keep him out. This, obviously, didn't sit well with the "No Tears Left To Cry" singer, who replied:

"none of this is true. it'd be so helpful is the media and everybody would please just drop it and drop makin stuff up so we can heal and support one another moving forward. it sucks to see this stuff. thank u guys for understanding. much love and appreciation."

It appears that the account followed Grande's request by taking down the tweet in question. Regardless, one thing is clear: Grande has been focused on her own health and well-being, particularly after an emotional past couple of months with the news about her split from Davidson and her ex-boyfriend, Mac Miller, recently passing. So it should come as no surprise that she simply wants to focus on the positives in her life in order to heal, instead of the negative energy that false reports may bring.

Grande's brand of love and light was on full display recently during her grand return back to Twitter. On Oct. 22, she returned to her classically positive ways on the social media site, telling her followers how much she loves them.

In one tweet, she wrote, "hi wow i missed u sm." In another, she told all of the Arianators just how important it is for them to take some time for themselves. "i hope ur well and taking care of yourselves ilysm," she wrote.

These positive vibes were also on display with an oh-so-adorable update that the talented singer posted on Oct. 24. As Cosmopolitan noted, one of her fans asked her how Piggy Smallz is doing. If you missed it, Piggy Smallz is the fun name that Grande and Davidson gave to their pet pig when they adopted him back in September.

The "get well soon" singer replied with the sweetest message ever. She wrote, "the absolute love of my life... I have no idea what I did... to deserve her." While the pet may be the love of her life, she still understands that the little pig is exactly that. Another fan got in on the Piggy talk and asked her what Piggy Smallz' favorite Sweetener songs were, to which Grande replied with a simple "she is a pig." Yep, that'll do.

Additionally, on Oct. 25, the singer announced her Sweetener tour, during which she'll travel across North America from March to June of 2019. So, definitely get ready to see those positive vibes on display during what is sure to be a show-stopping tour.

Between her upcoming tour and the little love of her life, it seems like Grande really is focusing on the positives in her life right now, so that she can truly heal and move forward.

More like this
'The Bachelor's Peter Weber & Kelley Flanagan Are Reportedly Back Together
By Grace Wehniainen
Gisele Bündchen Appears To Address Those Tom Brady Divorce Rumors
By Radhika Menon
At 14, Jurnee Smollett Was Taking Meetings With Missy Elliot & Lauryn Hill
By Chloe Foussianes
Devon Diep From 'Bling Empire' Wrote A Song About Her “Second Chance At Love”
By Grace Wehniainen
Get Even More From Bustle — Sign Up For The Newsletter